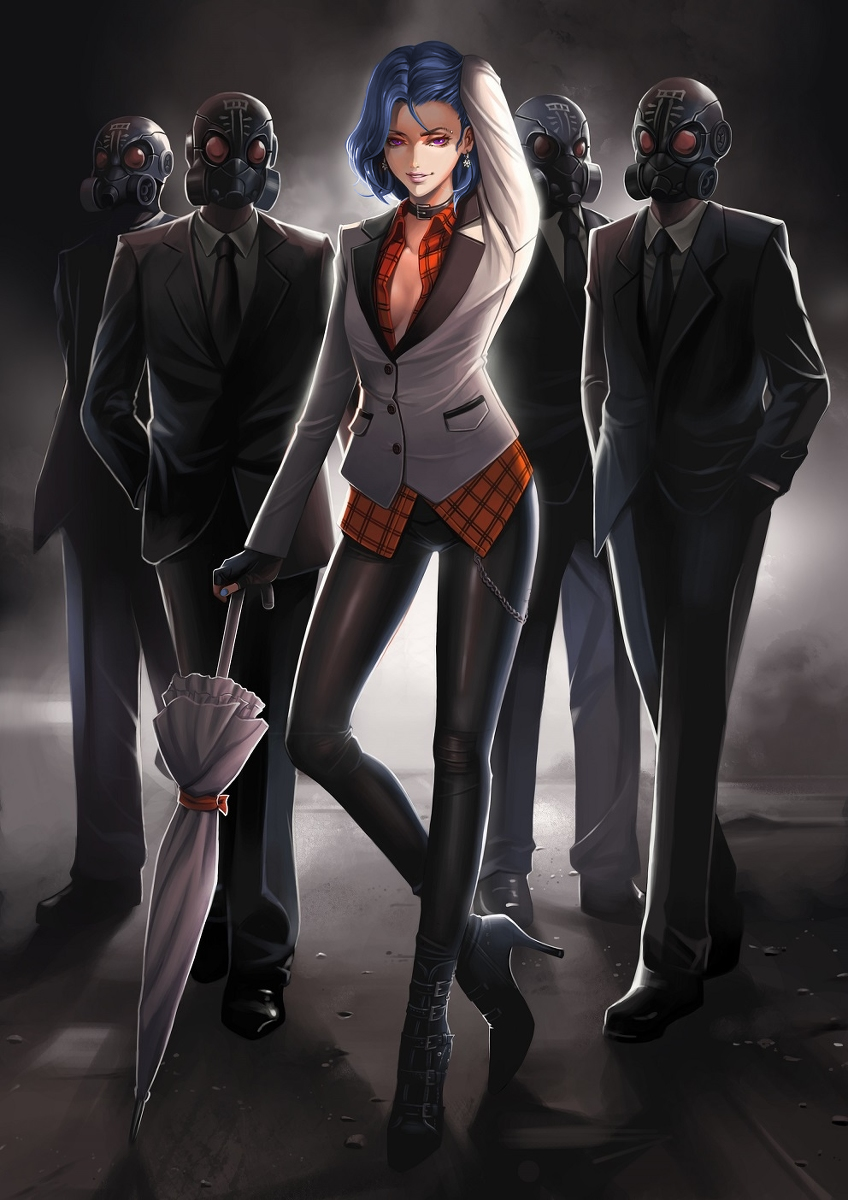 [Kazami Yuuka from TouHou. Art by DanteWontDie. Recolor Approved]​
Zienna has a shapely, toned, hourglass-esque body with a light tan, standing at 5'8" tall. She has purple eyes and blue hair, as is common with the Prax. She also has piercings on her ears and eyebrows.

Personality Description: Zienna is normally a pleasant if not a flirtatious woman. There's a hatred against authority figures running through her blood, but she always makes a show to be inviting towards them despite that. While not an outright troublemaker, people could easily see that she is a woman who wasn't afraid to get her hands dirty, whether it was from the way she looked, or the way she spoke, she always has that air of 'don't fuck with me' about her.

Biography: Zienna was born into a sect called the Daughters of the Flame, along with her twin sister, Sevina. They grew up healthy, but Zienna was more naturally talented, with her sister being more outgoing and more of a risk-taker than she was. When Sevina recovered from a near-death experience, Zienna took it upon herself to keep her sister from doing anything that could get her killed, but rather than forbidding her to do anything dangerous, she decided to be there for her for each of her antics. Thus the two of them became inseparable.

One day they were captured by a group known as the Paragons of Jawa, an organization of terrorists. The twins, along with others were... imprisoned, to take things lightly. They underwent unspeakable experiences as they were slowly coerced into joining the Paragons.

Zienna had the idea of pretending to join, and her sister went for it. It was the most horrid time of her life. And if she could, she would have burned every single Paragon alive. Just as they would be baptized into the Paragons, the Praxian military attacked, and they quickly pleaded to be taken to safety, immediately abandoning the original plan now that they would be rescued. For a time they felt safe.

While they were gone, the Paragons of Jawa attacked their hometown, leading to the deaths of their family. Rooting through the rubble of their home, Zienna overheard people talking about how it was the government leading this attack and simply framed the Paragons. During her time being a captive, she had heard something similar. Or rather, saw it on a recording. During one operation, the military accidentally bombed the wrong location, and to cover it up, the Paragons were framed. For a short time, she wondered if this was what happened, and if their god allowed this to happen. But at the moment she faltered, that was when she and her sister were marked for death.

After the attack, security was tightened, and having been with the Paragons for such a long time, they were a risk.

They were captured again, this time by the templars. And that was the last she ever saw of her sister. One night, she heard massive explosions that shook the compound for what felt like hours. Shots rang, and the prisoners cheered while some panicked. A bomb wiped out nearly all the cells in her block and knocked her out.

When she came to, she was dragged out of the rubble as the fighting was still going on. That's when she realized that she was in the hands of the Paragons once again. She killed her captors with unhinged brutality, her rage over her months of captivity finally bubbling to the surface in a brilliant spew of crimson. She tried to look for her sister, but she was heavily injured when another bomb exploded behind a wall she was leaning against.

The next time she woke up, she was in an infirmary. Her name was cleared, and she could return to her old life. She asked about her sister, and no one there nor the people working in the prison recovered her. She assumed the worst and begged to be taken to where they stored all the bodies from the attack. She looked over the mangled corpses and none of them were her sister's.

Her injuries prevented her from using the link nearly all Praxians were born with, but she knew her sister was still alive, despite what the doctors say. She wasn't insane, she wasn't hysterical, and she sure as hell wasn't going to accept that her sister was dead. If she was captured, Zienna promised to find her.

Risking everything, she returned to where she was held captive by the Paragons, expecting to find something to help her. And she found that the hole the Paragons hid in were once again filled with those cockroaches.

She stole weapons from the guards and gunned down everyone there as they were sleeping. Save for one who she interrogated for locations of the other cells. She was fuming with rage at this point and while manhandling her captive, her mind triggered a link with her captive and flooded his mind with so much fear that he cried.

One by one she hunted down the smaller camps and crippled them. For the bigger camps, she contacted the military to do the work. Of course, she used another name. But when things began to slow down, she decided to expand her operations. She needed people with grudges against the Paragon and wouldn't mind taking justice into their own hands. It wasn't hard to find volunteers.

She and her new group hunted down camp after camp, and while they and the military had shaky relationships, she simply didn't cross their paths, unless it was to save them from the Paragons. It was a good way to convince them that they were only after the Paragons, but it didn't improve past shaky friendships.

She did this for years, all the while keeping a lookout for her sister, never letting go. During a raid on another Paragon cell, she learned about an ancient power located deep into the territories of the Turac. It was a dangerous place and the crew she took on that expedition were slaughtered, but she found what she was looking for.

She entered a tomb, resigning herself to death after realizing that she caused the damnation of the people that followed her on this quest. To her, it was better to die here than return with her tail tucked between her legs. She wouldn't be able to face the rest.

The traps there were magical in nature, but she felt a guiding hand lead her through most of the deadliest ones. When she reached the bottom after what felt like a couple of days, she found what she could only describe as the ghost of an angel. And it wanted to be freed. The angel called themselves Kyre, and claimed that they were one of the first angels by Khalida's side who grew in power, and after a conflict with the other angels who were blind to Khalida's growing insanity, they were kept prisoner. Kyre was entombed here, awaiting for someone to free them.

Kyre offered their power in exchange for letting them inhabit Zienna's body until they could once again stand on their own, for the years the they were kept captive had waned their energy, and needed a vessel to allow them to recuperate.

Zienna accepted and returned home, now the vessel of a forgotten angel.

Recently, Mal herself broke through a number of Paragon cells along with the Daughters of the Flame. Zienna cursed herself for not being there. If anyone could have helped her find her sister, it would have been their deity of war.

But there was soon a consolation prize. A Hama called her attention after tracking her down and told her that Sevina lived. This was the only time that news of her sister came up, and she was so overjoyed that she couldn't properly interrogate him. He may have been a holy man, but she was rightfully suspicious when this person finds her and tells her just what she wanted to hear.

He left for the world she was pointed towards, leaving the operations on Mes to her trusted lieutenants, however they would remain in contact so Zienna wouldn't lose control of what she had built. And so without wasting time, she began her journey to the world called Earth. She had sent a few scouts beforehand and had them secure housing for her eventual arrival, as well as to get the lay of the land.

Resources: She stays in a hotel suite. Zienna also took a few of her soldiers to act as guards. The scouts she sent beforehand also set her up with a generous amount of money that was converted over from Mes.