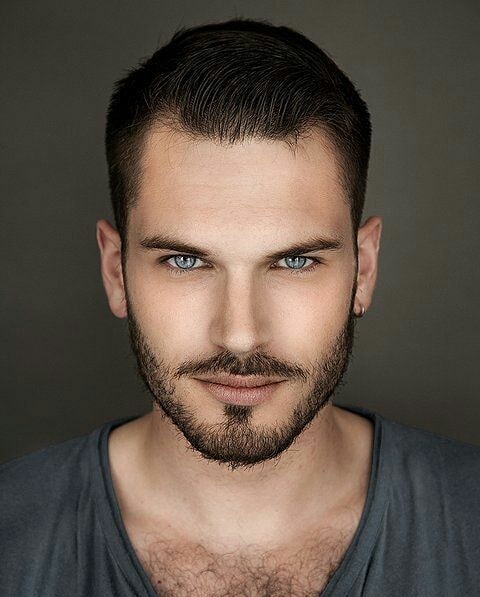 Face Claim is model Gilles Chevalier
Vladimir isn't supernaturally beautiful, but he almost is. Standing 5'9" tall with a muscular, athletic build and chiseled features, he is decidedly handsome to most people. His olive skin compares nicely to his short dark hair and a well manicured beard. Of note, his eyes are slate blue-gray and sometimes seem to shine in the dark ever so slightly.

Personality Description
The personality of a monster hunter does not change much when he retires. Vladimir retains his drive, his need to push forward and his resolve to not give up when faced with a challenge. He is decisive and intelligent, not given to fear or anxiety easily. He is also decidedly friendly and understanding, and is fully truthful when he tells a fledgling vampire or newly turned werewolf or recently deceased ghost that he knows how they feel. Because he does. He's been there before.

Despite his outward friendliness and his drive to help others, Vladimir does have a darkness within him. Though not common, when he falls into a depression it is oppressively deep. Likewise, he has within him a tendency to want control: over himself, his work, and those close to him. If allowed, he can become an incredibly domineering person.

While not low-brow by any metric, Vladimir has a bit more of an appreciation for rustic and less high-class enjoyments. Given the choice between a simple dinner party with friends and a gala with rich socialites, he would pick the former any night. He does attend the latter, however, as he understands the need to mingle in such circles to achieve his goals.

Active Abilities
Poltergeist's Touch - Due to the time he spent dead and trapped between this life and the next, Vladimir has a minor telekinetic ability. Within ten feet of himself, he can move objects of less than two pounds with dexterity comparable to using his hands. The larger the object (or the more objects simultaneously), the less precise he can be. Vladimir cannot use his telekinesis to move more than a total of one hundred pounds.

Passive Abilities
What is a man? - Vladimir is blessed, or possibly cursed to never be more than a man. Curses that change his human nature, such as Vampirism and Lycanthropy, do not stick for long. Three weeks after he is turned, he will be fully human again with only the slightest of tells that he was anything but a man. Even undeath will not be permanent. In the case that he dies and comes back as some form of undead, in two months' time Vladimir will return to life as if no time has passed. If he dies and does not become undead, he will remain dead as a man should.

Predator's Physique - Due to his time spent as both a werewolf and a vampire, Vladimir's physique is enhanced to his benefit. With only minimal exercise he can maintain peak physical fitness. Likewise, his endurance is triple that of a normal person, allowing him to exert himself physically and go without sleep safely for three times as long as a regular person.

Weaknesses
Once a Vampire - Some of the negative trappings of being a vampire have stuck with Vladimir. While a splinter might not harm him significantly, any wound suffered to him by a wooden weapon will leave him physically exhausted and in need of rest in addition to the actual damage caused by the wound.

Silver Anathema - Due to his time as a werewolf, Vladimir is slightly allergic to silver. Even brief skin contact with pure or mostly pure silver will cause a minor rash. Prolonged exposure worsens the effect incrementally.

Biography
Vlad was born the son of the son of a bastard of German royalty during the early years days of the German Empire. His father was concerned with businesses and finances. This left his mother, a woman of Slavic descent whose family had a history of hunting creatures of the dark. A history that they kept from those who were not blood, even their beloved husbands.

Throughout his childhood, Vlad was trained in secret by his mother and uncles in the arts of their family. Tracking and tracking were the beginning. Then the rites of banishment and purification. He took to it with glee, thinking himself a mighty hero in the making.

Such a life catches up to you though, as Vlad's mother found out when their home was attacked by the mate of a vampire they had destroyed years prior. She and her son were killed in what was called a wild animal attack. The father mourned, and this mourning kept Vladimir from finding peace.

For decades he was stuck. A ghost in his own home, shackled to the mortal plane. Until one day he wasn't. He was a boy of eight again, his father now a doddering old man remarried and with new children. Vladimir was called a demon and barely escaped with his life.

He found his mother's family. Fell in with them and resumed the Hunt. It was all he had now and he wanted revenge. Vladimir was nineteen when he found the vampiress and slew her. But he was turned in the process and killed those who had gone with him.

Once again, Vladimir eventually turned back to human. It took less time than before, but still long enough that he was pronounced dead by his family. He wanted to know why this happened and so he ventured into the world to seek answers.

Along the way, he encountered many more creatures of the night. Occasionally he would be killed or turned into one of the creatures, only to return to his humanity in incrementally shorter periods of time.

As time passed, Vladimir found that he could not so easily hate the creatures he had hunted for so long. He knew their pain and their hunger as well as he knew his own scars. The nature of his travels changed, and rather than hunt the so-called monsters of the world he decided to learn about and from them.

It was during his travels in the late twentieth century that he met an established clan of werewolves in the American Northeast. They mentioned to him an island, Manta Carlos, where their kind could live peacefully and without needing to hide.

Vladimir moved to Manta Carlos and began his schooling. He eventually graduated with a medical degree and a focus in vampiric and lycanthropic studies. He has yet to discover why he is forced to revert to human, but his work on the island keeps him busy enough that it isn't much of a concern currently.

Resources
Has a modestly sized home on the island and the income he makes as a doctor. In addition, he has collected some of the tomes, tools, and scrolls of his family as keepsakes and mementos of where his life began.

Additional Information
This character application was made by @Kada for exclusive use by @Zora.
Last edited: Jun 8, 2019

Your character has been approved.
Evie Everson
Leo
Maris Haze
Wednesday
You must log in or register to reply here.
Share:
Link