Violeta has pale skin, though she is capable of blushing and frequently does so when feeding in larger amounts. She has a thin, athletic figure that she can never really lose. True to her name, she has somewhat wild violet colored hair that drapes down past her shoulders. She prefers to wear loose clothing in multiple layers and is very fond of leggings or long socks and long sleeves. Unlike many vampires she does not feed on blood so she does not have fangs. Her blue eyes are sometimes shiny and other times very dull.

Personality Description: Violeta is a little unsure how to be her own person. She is used to following the orders and wishes of others. She is drawn to anyone who exhibits strong emotions, though she has trouble actually helping people with their problems. As such she sometimes comes across as clingy, though she is more than capable of protecting herself. She is a little scared of all gods, demigods and angels due to the potential power they hold over her.


Resources:
Violeta lives in the dorms and receives the usual allowance. The only things she brought to the island were a few changes of clothing and a sentimental necklace.


Violeta was born Danielle Rose Grouse to a happy working class family in The Bronx, New York City. Her father worked as a maintenance man at Yankee Stadium. One day when Danielle was about 10 years old she went with her mom to visit her father for lunch at a small place near his work. While at lunch, a strange man and his entourage came into the little cafe and locked the door. Once the blinds were drawn they gagged all the staff and patrons and began tearing them apart as they wept in terror. Danielle was pushed under their table by her mom and sat there silently watching in horror. The bad men seemed to be reveling in the fear and panic.

When they were done with the adults, their leader poked his head under the table and discovered Danielle quietly weeping. Strangely he did not attack her. He offered her a hand and, not knowing what else to do, she went with him.

That was the last time she saw her parents and indeed when she stopped being Danielle. The man, Mathias Zane, was the leader of a vampiric cult and traveled across the world inflicting fear and panic so he could feed on it with his turned supporters. He groomed Violeta, who he had named based on the flower she had in her hair (her favorite) when he found her, to be his most loyal servant. He gave her everything she needed to survive as long as she obeyed him absolutely on everything. Punishments were severe.

By the time Violeta was 17 she had taken to dying her hair violet to match her name and was completely brainwashed to support Mathias. In return for her undying loyalty he sealed her devotion by making her a vampire as well. For some reason the violet hair became permanent in the process. She continued being loyal and he taught her how to feed on emotions. She found that she was able to feed on positive emotions too, but had very few opportunities to do so under Mathias. Between the brainwashing and being a thrall to Mathias Violeta was forced to commit many acts of horrible violence.

By the time Violeta would have been 18, Mathias had been rampaging for long enough to catch the eyes of several gods. They could not strike at him directly without interfering too much in the mortal world. Instead they offered a "gift" to Violeta when she was out running an errand for Mathias. They would free her of her blind servitude to Mathias. Except that the gods had ulterior motives and worded it so that Violeta would be compelled to follow the orders of the gods. They then gave her a wooden stake and ordered her to stab it into the heart of Mathias. If they could not interfere directly they would just have a pawn do the dirty work.

Violeta was able to get close to Mathias easily- she was his personal servant by then. She stabbed him in the heart with tears in her eyes, and he was no more. The gods thought about destroying her as well but after examining why she had become what she was they ultimately decided to just partially remove their control and give her a chance to live a mostly normal life. She would technically be able to do what she wanted but would be heavily pre-disposed to follow the wishes of the gods. Her reward for helping the gods would be a life, of sorts. With the gods' deal done they left Violeta to deal with the aftermath.

The other followers of Mathias were outraged and attacked Violeta and the fight was brutal. In the end Violeta was able to destroy them but was left badly injured. As she lay in the remains of the only family she could actually remember, she decided to give herself a last name. She chose Escamilla, the name of the city in Spain where she finally earned her "freedom".

Violeta bounced around between abusive boyfriends and girlfriends for about two years before she drew the attention of a scout and was brought to Manta Carlos for her own safety. She had been taught enough by Mathias' people to get by but her education was far behind what she should have been at 17, let alone 20. She has trouble in school because she is distracted easily if anyone near her is experiencing strong emotions for any reason.
More Information: In a relationship with Eon Cheshire
Last edited: Aug 27, 2019 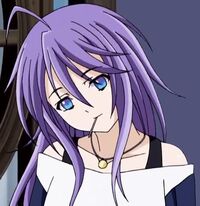 Physical Quirks: Drawn to people exhibiting strong emotions, just wants to be around them. Ignores personal space maybe a little too much. Sensitive to loud noises. Avoids direct sunlight.

Power Summary: Can sense emotions (knows which emotions and who they are from) within 15' and feeds on strong emotions. Either by being near them and slowly absorbing them (no effect on others, always "on") or by directly making physical contact for more than a minute (subject experiences lack of emotions for the next hour, Violeta chooses when to use this). Semi-immortality, regenerative healing. Can choose to amplify an emotion she senses within her range through her singing to make others feel that emotion. It is not overpowering but anyone who hears it would feel the effects. Her ears are unable to be hurt by her own singing voice regardless of volume.

Reputation: 12th grade despite her actual age, due to limited schooling before. Seems to keep gravitating towards emotional outbursts and emotionally scarred people. She has been known to collapse if overwhelmed by too much emotion in an area.

Misc Information: Has a difficult time not carrying out any orders or suggestions made by gods, demigods, or angels. Despite taking the name Escamilla and having spent time living in spain she only has a limited grasp on the spanish language.
In a relationship with Eon Cheshire
Pic source: official art of Mizore Shirayuki from Rosario + Vampire