Appearance Description: Missing her right hand below the wrist. Light reddish brown shoulder length hair. Grey eyes. Very small Tiwaz rune symbol (upward pointed arrow) behind her right ear. Almost always wearing a choker style necklace with a metal triangle charm hanging from it (symbol of the element of fire). She has a large tattoo of a snarling wolf, breaking out of chains and surrounded by flames, on her lower back and a modified triquetra symbol on her left shoulder blade. She dresses in quite a bit of black, though she usually incorporates red accents into most outfits. She's not afraid of showing skin, frequently incorporating sheer and other see-through clothing into her outfits or displaying her midriff when it is warm enough out. Though she never displays enough to be obscene. She prefers skirts, leggings or skinny jeans. Almost always has a pair of earbuds or headphones on her or nearby. Frequently plays with one of several ornate lighters.


(Actress Haley Ramm in Light as a Feather)
Personality Description:

Resources: Income from her part time job at a candle shop and a limited inheritance from her parents. Lives in a small, very low rent apartment in a rougher part of town.

Additional Information: Is part of a coven made up of seven people, all named for days of the week.
Speaks English and Norwegian languages
Last edited: Sep 12, 2019 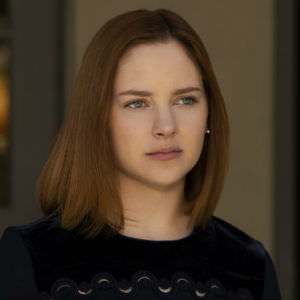 Physical Quirks: Extreme discomfort in quiet situations. Frequently playing music through headphones/earbuds even when not necessarily listening to it. Plays idly with lighters. Has a Norwegian accent.

Reputation: Works at a small candle boutique named Wicked Wicks. Lives in a sketchy part of the city. Impulsive and playful but a decent student in college. Moved to the island just prior to this school year.

Misc Information: Cami the black wolf familiar is frequently with her. Part of a coven with the other "days of the week" witches. Speaks English and Norwegian.
Image is actress Haley Ramm in Light as a Feather

Tuesday has a new bracelet.