Appearance Description: Pale grey skin with splotches of darker grey randomly across their body and solid black eyes. Messy white hair down to their shoulders, long pointed ears and horns protruding above the forehead. Very thin. Almost nonexistent nose. Small bright red claws at the tips of their fingers. 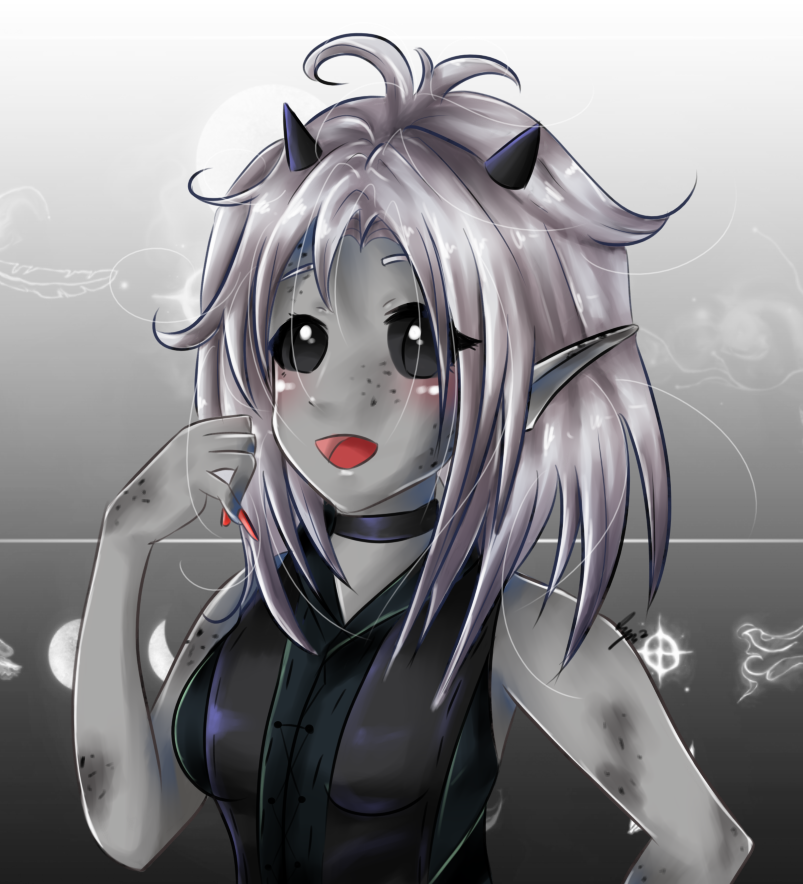 Art commissioned by me from SleepingAyumu on DeviantArt

Personality Description: Curious and cunning. Hunter mentality. Uses their shapeshifting to confuse and manipulate but also to help express their emotions. Shifting body features is like making facial expressions for them. Regardless of their emotion they never speak much above a whisper.


Biography:
Resources: Aside from their one set of clothing enchanted to shift size and shape with them and two sharp obsidian colored knives they came with nothing so they live in the dorms and receive the usual student stipend

Notable Features: (this is for the natural, unshifted features). Small, almost indistinguishable nose. Sharp black horns on their head and similarly sharp red claws at the tips of their fingers. Solid black eyes and white hair down to their shoulders. Usually wearing well broken in and maintained set of leather clothing/armor. Keeps two dangerous looking knives sheathed on her belt when it is allowable to do so.

Physical Quirks: Tends to shift their features as part of expressing. Speaks almost exclusively in a whisper.

Abilities Summary: body shapeshifting, clothing that adjusts size and style, turn into water vapor (extremely hard to detect). Senses of a wolf, see through darkness and non-solid matter. Superhuman reflexes. Extremely quiet movements, very difficult to track by scent. Sunlight is blinding/ prevents reading or speaking. Salt ring can trap and compel them to do something. Divine beings drive them away and burn on contact.

Reputation: Just arrived recently. Very quiet, though a few minor incidents occurred when they ended up near divine beings.

Misc Information: Art was commissioned by me from SleepingAyumu on DeviantArt
Last edited: Jul 24, 2019