Tier is an ostentatious sort of man, designed to draw attention wherever he goes. He appears primarily as a tanned humanoid figure, but his monstrous heritage is apparent. He has two large horns that protrude from his forehead, curving back over his head as they do. His ears are long and tapered in a manner most would describe as elvin, and his fingers end in claws. His hair is a dark purple-brown, and is short at the back despite the extensive bangs. He keeps a small beard, which is neatly trimmed. He has a taste for decoration, with bronze bands around the base of his horns, and around each wrist. He wears multiple earrings, rings, and other piercings. Tier is covered in scars, across his face and arms and down his torso. There's very little of his body that doesn't have some kind of scar.

Tiergoran stands 6', but looks more like 6'6" because of his horns.
PERSONALITY
Tier is many things, but refined is definitely near the top of the list. He enjoys the finer things in life, whether that be jewelry, food, or literature. He looks down upon the stereotype of the crass, violent demon, in large part because he's anything but. He enjoys attention and being at the very center of it, but he doesn't particularly care about the type of attention he's getting. Good or bad, it's all the same to him, and he's embraced that most would consider him wicked at heart.

He's a schemer at heart, a social butterfly who's actually a spider that loves spinning webs. He's embraced his position as a devil, something that cannot be redeemed. His need to consume sapient flesh has a tendency to drive people away, and he's largely written off the concept of human (or at least non-monstrous) friends.
PASSIVE ABILITIES
Blood-fed Physiology: Tieragoran is physically about twice as capable as a human in terms of strength, endurance, reflexes, regeneration, etc. When blood has been shed within a hundred feet of Tieragoran within the last hour, this doubles. His claws and teeth are naturally significantly more durable than human bone, and his bite strength is comparable to a crocodile. He does not age, and will live forever unless killed.

Flesh Eater: As long as he continues to eat his flesh diet, Tieragoran has no other bodily needs. He doesn't need to eat, drink, sleep, or anything else of that nature (although he can if he desires).

You Are What you Eat: Tieragoran develops powers based on those he's consumed in the past six months. Eating around 75lb of flesh from a person gives Tier access to muted versions of their powers, although they don't always stay in the long term. He only gains the natural powers from a species, and those who have been genetically modified or otherwise magically enchanted are treated as normal humans. If he only consumes human meat for six months, his powers become a blanket immunity to supernatural abilities.

Fast Forward Regeneration: Tier regenerates from injury at a visible rate. He can regrow entire limbs inside of a minute, and has a significantly reduced pain response. As long as at least part of his body is intact, he'll regenerate completely.
WEAKNESSES
Flesh Eater: Tier must consume about an adult human's worth of flesh from a sapient being per month in order to stay healthy. If he goes a month without eating, he'll begin to weaken. If he goes a full sixty days without eating any flesh, he'll die.
BIOGRAPHY
Cannibalism and slavery mentions

RESOURCES
Tieragoran has relatively little. He was allowed to transfer some of his money, but most of it was tied up with the NEK0 business, and obviously that isn't handy any more.

It wouldn't be inaccurate to refer to Tier as a demon, but he has no connection to any hell, and no weakness to anything holy. He's kind of like a nascent demon. 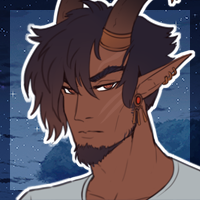 Reputation: NEK0 would know him, likely by look (even if he wore a human charm) or reputation. On the island, his only reputation is that he's the new management hire at the arena.