The First DSU Meeting After the Holy Water Incident 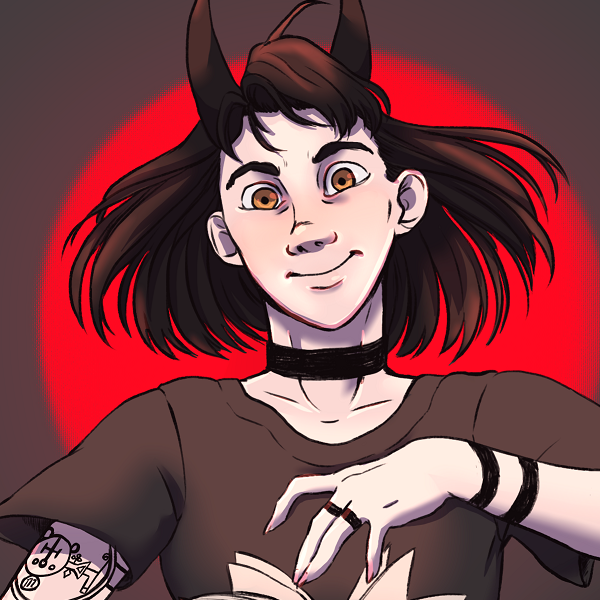 Chloe forced herself to walk to the DSU meeting, and she left her human shape charm in her purse. She felt exposed, wary the entire time, even with Ozerchabal following her around. But still, she was seen out in the open. She wasn't hiding. She didn't look afraid, even if she felt it.

It would be the first time she'd seen many of these people since the incident - when Xavier Joiner dumped holy water on her in the cafeteria, in what she'd thought at the time might be an attempt on her life. The court case had come and gone, and Xavier was still a free man. He had also drowned and come back as a merman, apparently, and some people quietly wondered if Chloe had tried to return the favor by putting out a hit on him.

A lot of people were scared, angry, or both. Chloe felt like she had to do something to address that. Talking with Jude had helped, but she still wasn't looking forward to it. She tried to tell herself it would be safe in here. She tried not to think about how many of the club's members were called "Michael."

For now, she was just meeting people as they came in. She expected to get crowded a little bit, considering how scarce she'd made herself for the last few weeks. People probably wanted to talk to her, see how she was doing.

Raella didn't know what to think. Being new to Starlight Academy, she wasn't there to experience the incident of the holy water but paying attention to the hushed whispers along hallways have given her a good understanding of what occurred. As a demon herself, she questioned the safety of her kind in the school at first but there was no going back now. Taking her first step into the DSU clubroom, she unraveled the illusion concealing her demonic features. Though she wasn't ashamed of her race, the rumors proved one could never be too cautious. Despite spotting the victim, Chloe, almost immediately, Raella didn't want to come off as rude and hence refrained from staring, choosing to give a wave at the present members general direction before going about her own business.

The darkened lighting combined with the unique furnishing of the room gave off a comforting atmosphere, putting Raella at ease. Casually pacing around the room, she observed the minute details the vicinity had to offer but eventually got slightly bored of the lack of interaction. After all, there's only so much to discover in a fixed area. Besides, talking to one of the members would do no harm. Her only concern was accidentally saying something offensive on her first meeting. Gathering her courage, she then made her way toward Chloe, her footsteps slow and hesitant.

"Hey! My names Raella, I recently joined this club. Yourself?"

Lips tilted upward in a quaint smile, Raella extended a hand toward the female to shake.

Liliana had, not only as president of the student council but as someone genuinely concerned about others, decided to attend the meeting of the DSU as an observer; to get a general feeling and a handle on what was going on, and to see how Chloe was actually doing.

Liliana also knew that she had been a little remiss in her duties for not having had reached out before, but between everything going on, along with the student council trying to help reassure the student body as best that they could, time had flown by. She also hoped that her presence today at the meeting might also show solidarity between the school and the DSU and help calm fears that the student council had taken sides.

"Chloe," Liliana said with a smile as she stopped to greet her, "I hope you don't mind me attending your meeting today," she told her as she nodded to a girl who had just introduced herself as Raella.

"Oh! I'm Chloe," she said, shaking the hand that was offered. "It's good to meet you, Raella." Her spade-tipped tail twitching behind her, she was just about to say something else when Liliana came to greet her.

"Don't mind at all! I wouldn't be advertising the meetings on posters if I wanted to exclude people. All are welcome." And punctuating that with a brief smile, she would try to pick her conversation with Raella back up where she left it.

Upon Liliana's entrance, Raella turned towards her and nodded in return as a greeting before focusing her attention back to Chloe.

Is it... current events that brought you here this evening? Or are you new to the school?

"Well..." Raella hesitated slightly, contemplating the option of voicing a perfect lie that she was, in fact, the daughter of a teacher named Jia An just for amusement. However, it would make a terrible first impression. Besides, it brought no benefit whatsoever hence she quickly shot down that option. Folding her wings neatly behind her back, her tail swayed idly from side to side.

"I actually joined this school less than a month ago and recently heard about this club! It seemed very interesting and I thought I should check it out. The recent occurrence also prompted me to join so here I am, I do hope that's alright!"

Liliana nodded at Chloe and at the girl called Raella, "Thank you again, Chloe, and I will let you two chat," Liliana said as she glanced from one girl to another before taking her leave.

"Oh, and welcome, Raella. If you need anything, please don't hesitate to ask. Also, if you are looking to join another club, the Hereafter is always looking for new members," she said before she went to find a seat near the back of the room, not wanting to disturb Chloe's meeting.

Chloe managed a smile for Raella.

This whole situation sucked. She was probably more terrified than anyone else here. She'd been taking these ridiculous precautions to protect herself, like wearing disguises and taking different routes just to pick stuff up from the grocery store. She hadn't wanted to risk walking between classes.

Chloe felt like a coward. And now she felt obligated to look strong and brave and calm everyone else down, about the incident that might have been an attempt on her life. She didn't want to be out here telling people it was all alright.

It was probably too late to call the whole thing off.

Some more people came over to say hi to her, verify that she was okay, remark on how they hadn't seen her a lot since the incident, stuff like that. They would reach a few minutes past their planned starting time before Chloe finally called for everyone's attention. She was holding a piece of paper now, with her writing on it.

"So... before we start. I know we've had a crazy few weeks, and I'd like to say a few words about them." She cleared her throat, and took a moment to look back down at her notes. "First, a recap, so we're all on the same page. A couple of weeks ago, a guy called Xavier dumped holy water on me. It didn't injure me, thankfully. I got the police involved, and got them to investigate it as a potential hate crime or murder attempt. He got off charged with just assault, when it was found that he didn't know it was holy water, and he thought it was just a prank."

Chloe could hear grumbles and murmurs from the other demons. Not a lot of people believed that he could really be so innocent, and they weren't shy about sharing that belief.

"Actually, I think he was telling the truth." Chloe said.

That shut them up real fast.

"Or at least... the truth as best he knows it. He didn't seem to have that kind of motive, or any kind of connection to the kinds of hate groups that might put him up to this. We can't know for sure if he was mind controlled or blackmailed into it, but as far as we can tell, something crazy like that gives him a clearer motivation than anything he would choose for himself. So we shouldn't be directing our anger at him. It's true he's not blameless, but he's not the way I've seen people talking about him online, either.

"I've also been receiving strange and threatening packages in the mail. The other day..." She sighed. This was probably not helping a lot, but she'd already brought it up. "I got a box full of crow's feet and blood. And beaks." She shifted her weight where she stood. Her own scaly legs might look something like those crow's feet, if you squint. "We're not sure who sent it, but it couldn't have been Xavier.

"It seems like being targeted, but for better or worse we can't be sure why. It might not even be speciesism. There's a lot we don't know, but the best thing we can probably do is stay vigilant, and try to find a way to prevent this kind of thing from happening again."

She started folding up her paper. "So. Any... questions about any of that?"

Mind controllers? Now the idea of that was interesting. Very interesting. Since Raella hadn't arrived in Manta Carlos too long ago, she was barely beginning to discover the what lay within this island. The idea of beings with all sorts of powers being put together in the same vicinity sounded dangerous yet what ensued from it was harmony. Realizing she had zoned out slightly in Chloe's speech, Raella quickly tuned in once more, just in time to hear about her receiving threatening items. If the guy who assaulted her's lack of knowledge wasn't enough, the threatening packages which were sent definitely confirmed that Chloe was being targeted in one way or another. However, the items which she speaks of...

The slightly more sadistic Raella was extremely tempted to ask for them. Firstly, Chloe would most likely have little use of it and secondly, using her own blood to draw up summoning circles was a pain. Literally and figuratively. If Raella took the items, it was like killing two birds, or crows in this case, with one stone. Yet, bringing up a request such as this would be completely and utterly rude. It was clear Chloe was already terrified of the incident which took place; the least one could do was show some sympathy. If someone were indeed targeting her, there had to be a reason right? Regardless, Raella would just see what Chloe thought about her pursuer's perspective before offering her help. Casting a few illusions and playing around with true attacker like a puppeteer does his little marionettes would be entertaining to say the least.

Slowly raising her hand, Raella then spoke, breaking the short-lived silence. Her voice was loud and clear, ensuring everyone in the room were able to hear and her tone was nonchalant but there was a hint of empathy.

"Just one, for what reason would they target you?"