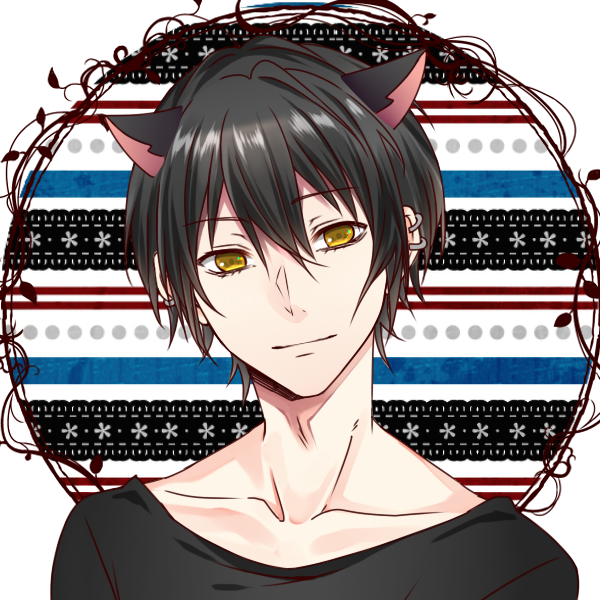 Shiro comes off as btight, friendly and social, they're intelligent and gets relatively good grades with them able to make friends rather quickly, he has a creative side, writing stories and poems in secret. You'd never expect a child with such a warm smile would be so troubled but they very much are, their time with the witch has left a considerable amount of emotional damage. Dealing the symptoms of their past brainwashing and normal teenage stuff can make them easily stressed at times, as such they tend to look for distractions in things that most would consider inappropriate for someone their age. Despite this they are honestly a very sweet person with a big heart, they make friends easily despite their own negative view of themselves and genuinely enjoys being around people despite their mood swings and depression.

•Passive:
•Longevity: Bakenekos can live up to 500 years.
•Enhanced Intelligence: They learn things four times faster than most their age and have a near perfect memory, with any lost memories being restored.

•Weaknesses:
•Vulnerable Mind: Because of damage caused by their adopted mother's magics their mind is much more vulnerable to mind altering magics. All mind altering magics will affect them twice as much as they normally would. Exposure to multiple ones can cause a sort of overload that will leave them feeling physically ill even though their body is unharmed by it.

•Her guardian is incredibly wealthy, as such money is never an issue. She also receives money via a part time job as a waitress.

•Shiro was born in Hokkaido, Japan, to a cat mother who had magic running through her. She died during harsh winter along with many of his siblings, leaving only them and two others.
•Eventually a kind man found them, took them in, and saw to it that they were given to new homes.
•Shiro was taken in by a newly married couple, they loved them, cared for him, until the age of six, when both died in a car accident. They were left to wander the streets as an alley cat.
•A year later they took their human form, luckily he found clothes, even then they spent most of their time in cat form.
•Eventually a lady found them, she seemed friendly and kind and somehow knew what he was. She was in fact a magic user, a witch, and so she took them in.
•She used her influence in the local town to get him into school, it was around this time they discovered their ability to change sex but kept this secret.
•Shiro thought all was good in the world, that he'd found a mother and a home. Unfortunately this couldn't be further from the truth, the witch only wanted the magic that flowed through him.
•So she'd conduct painful magical experiments on them in an attempt to find a way to fully drain them of their natural magics. The witch would magically heal any physical damage she caused while using her magic to suppress his memories of the abuse.
•This went on for some time, until thet turned twelve at which point her memory suppressing magics started to become less affective. While the memories hadn't truly come back they did start to have nightmares about the torture and the weakening magic started to affect him negatively.
•She started to act out at school, and found trouble in different ways, including sex despite his young age, usually with other students. Those last few years were deeply troubling for her.
•Things came to a head when a scout found her, said scout began an investigation into Shiro. The situation turned bad, the witch was ultimately arrested and sent to the istlets while Shiro was sent to the academy.

•Main Image is a commission from klamblotblob.
•Male image was made with this picrew.
•Has a small notebook shr always keeps with her.
•Carries a ball of yarn and a pocketknife with them.
•Can speak both Japanese and English.
Last edited: Sep 13, 2019

Notable Features:
Wears goth style clothing; skirts, dresses, and jeans and t-shirts. Has four earrings in her left ear and two in her right.

Physical Quirks:
Speaks in a light Japanese accent, plays with a ball of yarn when nervous or stressed.

Abilities Summary:
Can turn into a cat, and temporarily turn into a few other animals. Can change their sex at will. Has a werecat form triggered by strong emotions. Can grow a cat ears and tail. Can make gems. Learns things four times as fast. Near perfect memory. Can sprout extra arms.

Reputation:
They're generally known as the moody goth kid that actually has a really big heart and a sweet smile once you look a bit closer. Has a few siblings around that they occasionally hang out and bicker with along with a handful of friends.

Misc Information:
Collects yarn and always has some on them.
Icon was made by me using this dollmaker.
Cat Icon is a stock photo from Pexels.
​
Last edited: Apr 19, 2019

This characters abilities were updated and approved.

Shiro can now talk in cat form, and can sprout cat ears and a tail.

Shiro has a magic staff.