Appearance Description: Shoulder-length dark brown hair and unusually pink-purple eyes. A soft, friendly face unless she is pissed off. Most frequently she is clad in well-made leather armor accented with beautiful enchanted vermilion ringed blue steel magical reinforcing plates. Seyyal is a professional and carries herself as such. She usually carries small pouches of sand on her belt.

Art by DespairMode on Deviantart and Adopted by me
Personality Description: A very loyal person, Seyyal bonds to the people she cares about and feels like something important is missing when she is away from them. She is definitely not an introvert, preferring to be around other people as much as possible. She is not especially artistic or good at imagining things, preferring to watch carefully and react as needed. Seyyal's plans usually end up being more of rough ideas that are thrown out in favor of improvisation and adaptation.

Biography: Seyyal is not a noblewoman. No, she was born without a known father, but to a loving mother in a small salt mining village on the outskirts of the Vermilion Sands. A portion of desert that has a surprisingly rich amount of flora and fauna. Illogically so, in fact. But no one ever questioned how the life persisted despite a lack in water supply.

With no father to take the name of, her surname became that of the sands themselves. A child of the sands, she was called. Destined to return to the sands whence she came when her time is up. Seyyal remembers years of working as a kitchen assistant and even briefly as the handmaiden for a local low noble before she felt the calling of the sands take hold of her.

The moaning hum of the orange dunes of sand around the village drew her out of bed one night and she found a curious pair of swords half buried, only revealed due to the particularly significant avalanche of sands that night. Taking hold of these perfectly preserved blades gave her the little nudge she needed. The kick in the pants to begin wandering in search of a more adventurous life.

It was more than a year before she found herself among the other Lionesses. Her traveling party. Her friends in arms. And yet she can barely remember what it was like between getting the swords and joining the party. Probably because none of it was real. It was all the imagined backstory created by Lycia's mind in the Dream. The adventures afterwards though were real-enough for her. For two years Seyyal and the others took small tasks. Clearing out a den of jackals feeding on a poor town. Protecting small caravans through their travels. Even seeking out and beheading the ugly goblin "king" Snort.

Until finally they were approached by an official envoy secretly sent on behalf of the Princess of Light and Wonder herself. The tired old, wiry man promised a bounty of gold and everlasting support from the Princess if they would rescue her from the clutches of Dark Baron Kara Hakan. Deep within the Obsidian Spire the Princess was held captive under lock and key and bound in chains. Unable to taste any freedoms at all. It took very little persuading though- most of the party were willing to undertake the quest even without the promised rewards.

They traveled through the deserts towards the eyesore of a tower that the Spire was. Until one night, (the equivalent of the 10th of May on MC) as they all lay sleeping around the campfire, they were transported somewhere else. Somewhere far greener and far stranger than they had ever been. The island of Manta Carlos. Seyyal found herself waking and reaching for her sands as strange men in unusual uniforms yelled something to her that she couldn't understand fully. Mostly because she was pretty sure she had hit her head on something hard. She had ended up inside one of the fountains on campus and as such her sands were useless. Dissolving in the water lapping all around her. Not that she was really up for much of a fight against multiple people at once anyway.

Since then she has been learning about this new place. Confused at why she was transported here but making the best of it. Language charms and classes, and a head spinning from all the new things to take in. But free lodgings and food is always appreciated, even if she is forbidden from summoning her swords on campus.

Resources: Living in the dorms and receiving the usual student stipend

Additional Information: The Lionesses are from Lycia's Dream world originally and consist of: herself, Cambrie, Sabra, The Mage, and The Healer (links to be added once the characters are apped) 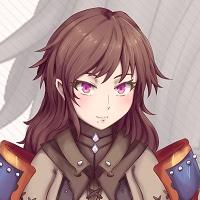 Physical Quirks: Her accent is similar to Lycia's but a little less pretty. She's seldom caught unawares but will easily turn to embarrassed blushing or anger if surprised, depending on the nature of the surprise.

Abilities Summary: Summonable magic swords. Armor that reduces damage by half. Max human physicality. Will know a person's name on sight, and their abilities within 30 seconds of sight.

Reputation: New to the island. Some might have seen or heard of her falling into a school fountain upon arrival. Seems right out of some kind of adventure fantasy

Misc Information: Part of Lycia's Lionesses. Figures from her Dream world that have come to life