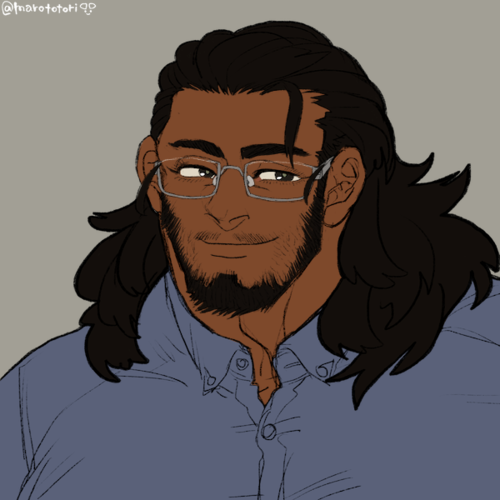 Made in character maker by marototori


APPEARANCE​
Samson actually looks like your everyday human. There is nothing about his looks that would prove otherwise. He is indeed tall since he is 6’7” but that still doesn’t really mean he doesn’t look human. He may be tall but the reasoning could be either simple genetics or the fact he is a Titan. Samson is also really swole, a big guy who could easily make it big in sports such as Basketball or Football since he is a very athletic person.

Samson’s skin is dark, almost like milk chocolate in complexion. His left arm is covered with a tattoo sleeve which consists of many flowers and an ocean theme that goes up to the side of his neck.

He is also a hairy man. On top of his head he has a very messy mane of wavy hair that goes down his back. He tries to avoid having his dreads in his face, his efforts so far has just been tying them back into a ponytail. He definitely has some fuzz on his face. Due to constant shaving he never has had a full beard in awhile. (Which he totally had braided) and has no intention on ever growing a full beard again. Other than his facial hair, he has thick eyebrows and a very hairy chest.

Samson isn’t exactly a flashy dresser. He is usually and mostly seen in his police uniform.When not donning the uniform he is wearing slacks and casual clothes. Sometimes he can be seen wearing swim trunks and crocs.

Now, Samson’s Titan form is truly a sight to see. In size, he is around three stories tall on land. In the the deep sea however he can grow even larger and his form will adapt and become more aquatic like, taking on traits of the ocean. On land he still shed some of his human flesh to take on a few traits of the ocean though it is not as grand or as beautiful as he is while in the ocean. His dreads seemingly become tentacles, parts of his skin becomes scaly with a blue and greenish hue,and seaweed and coral decorates his body. He has gills, webbed hands along with an extra set of arms, giving him a total of four arms.

He’s just looks like some sea monster all around either way.​

PERSONALITY​
Samson does in fact take his job very seriously. He is typically a more by the book type of person and follows all the rules and laws given. He makes sure to keep order and everything as peaceful as possible and does so with a heated passion. He really loves his job.

He is normally nice to everyone. If no one seems to be super hazardous to others or mildly rude and toxic he would be fine. On the other hand he treats criminals different. He is suspect of most of them even if they have supposedly “changed ways” and has a hard time of trusting them. Though his attitude varies on the crime and he wouldn’t just be straight up hostile.

His views on certain things such as the pardon system. He isn’t exactly a big fan of it seeing as certain potential and obvious criminals are just instantly forgiven of their crime. But whatever, not like it will change anytime soon so he can’t help it.

Other than his job, Samson has a very strong love for everything aquatic. He loves the sea and everything that comes with it, the waves, the animals, the plant life, and even the saltiness of the ocean water. Oh man, and Kelp chips. He loves those so much.

Samson is a very passionate person when it comes to the ocean. He’d help clean up the beach, save beached animals, and all sorts of protecting the ocean sorta stuff.​

The Shape of Water
Samson has the power to become water. His entire being, including whatever he is wearing is turned into water which allows him to avoid being damage or slip into places he couldn't easily get into before. As water, Samson can either keep his human form or simply become a puddle of water. As a puddle he still has all his senses, can move around, and talk.
Since he is made of water, Samson can become intangible. He can allow things or attacks to flow through him or be painlessly absorbed into him, assuming it is something simple as a punch or getting shot.


Titan Shifter
So Samson is actually a legit Titan. He is able to shift a full on towering ocean monster giant thingy. Though; he has to be in the ocean for him to fully shift. He can only partly shift on land.

Semi Immortality
If Mother Nature let it be; Samson can probably live forever….and ever and ever and ever. He could literally live for as long as he wants and doesn’t worry about getting really old anytime soon. Now he can die. He just can’t die of age and illness.

Like all Titans, Samson has supernatural and almost godlike strength. Now he can’t hold the world itself like Atlas, however he can pick up heavy trucks, burst through walls like the Kool-aid man, and just overall really strong.

His strength however is locked at a certain level of just picking up trucks and cars, and bursting through walls and doors in his human form. The only time he could use his full strength would be in the ocean. There he could probably hold up a freighter ship. He could have definitely stopped the Titanic from sinking….if he was...there and existed.

Underwater Breathing
Samson can breathe just fine underwater. He doesn’t need or have gills to do this either. It is a completely natural thing for him.

Language of the Sea
Samson has the ability to communicate with the animals within the sea. He can also speak and understand several languages of the sea such as Atlantean and can easily learn any other. This is only real restricted to aquatic species languages, he can’t learn and understand other languages such as German so easily.
​
Weaknesses:​

Electricity
Samson is made of water which is a very good conductor of electricity. He can in fact take in large amounts of electricity without dying however he becomes weaker and very sluggish. He won’t be able to fully sustain himself and so his powers will weaken. Not only that depending on the amount, he could actually collapse into a pile of water and be paralysed/stuck in that form.


Ocean Retreat
Samson is a being of the sea so naturally, he has to visit the ocean. He doesn't have to visit the ocean everyday he just can’t go a long time without visiting. He will slowly become dehydrated and even anxious, depressed, or slightly paranoid over the days until he returns to the ocean.


​
HISTORY​
Samson Hawk’s story starts in the ocean because, he is an Ocean Baby…..Titan.

He wasn’t born like some normal human. See, Samson was created by the Ocean. (Well Mother Nature) As a baby he was fine. The Ocean treated him well and protected him from harm, he grew and learned the ways of life from the Ocean.

However, life in the ocean was cut short. In order for him to learn more about the land Samson had to leave the comforting waters of the ocean. It wasn’t exactly his choice as Mother Nature in the form of a storm had caused the young boy to wind up on the shores of Manta Carlos.

Thus started his life, on land.

As a kid, Samson was taken to an orphanage and given the name Samson because of how long his hair was. Hawk came in later, after he resiliently avoided being adopted for the tenth time. (He was a problem child, lotta foster parents. Always claimed Mother Nature and the ocean as his true parents)

It wasn’t until high school that he finally got his act together and stopped with the bullshit shenanigans. Well….some.

Once done with school, Samson had a large list of careers that he could go after and probably be great at. Samson had set his sights on something simple. He wanted a simple job for a simple life however after some thought he joined the police academy so he could challenge himself...in a way.

The Academy days were easy enough for him, he was at the top of his class and was known for helping the other Cadets to perform at their best as his one of his codes were “Let no one fall behind” which no one did. He made sure that his class

Instead of getting assigned to the station, Samson sought out to become a Police Training Officer, or PTO for short. So instead of just becoming a cop himself, he found enjoyment in training and teaching new cadets instead.

After five years as a PTO Samson finally set his sights on formally becoming a cop. He easily did because of his record and once he was a cop he worked his ass off to improve said record and is still doing so until this day.

Physical Quirks: Can always be seen carrying a water bottle, because being hydrated is important.

Power Summary: He is a Titan; Strong as hell.
Can speak and learn any language of the sea
Can breathe underwater
Can turn into water
Semi immortal

Reputation: Its the Titan cop guy…..who wears crocs. And has the highest record for catching petty criminals.