Adelaida had a few hours to spare today.

It was a bit early to go day-drinking, so she held off on it - a little, at least - and decided instead to see if any of her less close old flings and friends were free. There were a few of them she'd kept in touch with, and for today she felt like having the company of someone she wasn't usually around. A mix-up, as it were.

A while back, she inspected her mental list of known people, and settled on seeing if a certain Amaltheia was free today. Without any delay, she instantly asked her to lunch - her treat - at one of her favorite spots in the city, not particularly caring that it had been a while since they'd last talked, or that their last interaction was a less than safe for work tryst where money changed hands.

Such was Adelaida. She waited outside the restaurant without even bothering to check if there was confirmation on her phone. There was no plan for if she got stood up, or what the day out would even entail. 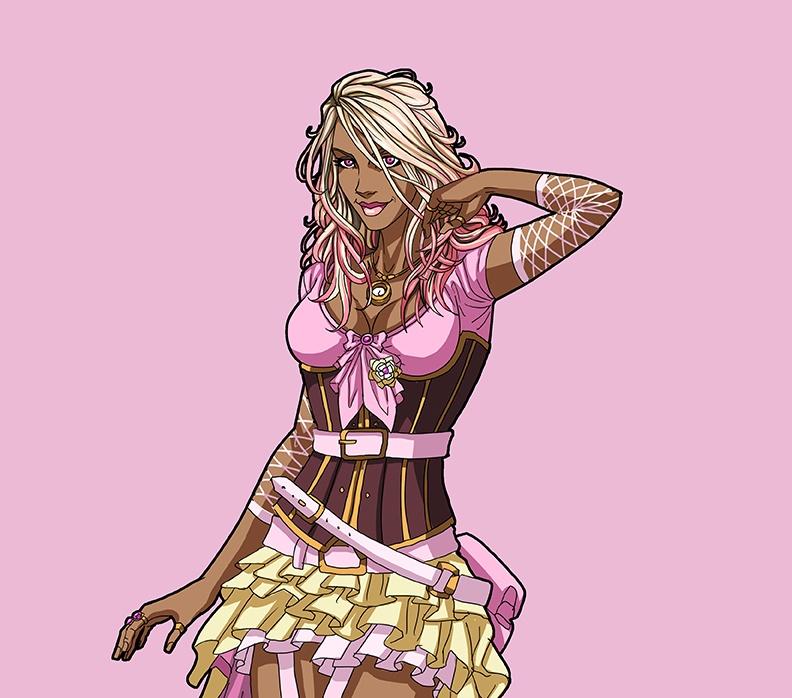 It wasn't unusual for her to be friends with people she serviced, as long as they understood that sex for money didn't equal romance. However she was surprised when Adelaida contacted her, she remembered the girl being fun, and so jumped at the idea. So she'd gotten dressed and headed for the restaurant, humming a bit as she went.

She'd step around the corner, glancing around a moment before spotting her. "Hey there," she'd say with a smile, "it's good to see you." It was, she remembered her being nice, and fun to be around.

"Thanks for inviting me, been a while since I've just hung out with someone," there was her roommate, who she adored, but it was nice to hang out with others.
Last edited: Sunday at 3:06 PM

Adelaida lit up a bit when she saw her date coming in. After all, she didn't bother confirming whether she'd show up or not. "Heeeeey... nice to see you, nice to see you as always," she said, coming in for a hug. As always, she said, even though they'd only met a few times and mostly at night, and mostly to sleep together.

She let go after a few seconds with a wide smile. "Thought it'd be nice to eat out, but I don't really know eat other than people like me who pay you, so I figured I'd play it safe. Standard western fare, unless you have some place you wanna try instead? On me."
"BELLI DURA DESPICIO"

She'd return thr hug with a giggle. "Standard western works with me," she'd say with a smile, "since you're paying I think it's only fair that you pick." She made a mental note to pay for dinner next time, assuming there was a next time.

The goddess would let her friend lead her in, looping her arm with hers. "So, spontaneous?" she'd ask curiously. "I like that, it makes things fun," she'd say with a chuckle.

Amaltheia would look around the restaurant as they entered, it wasn't a place she was familiar with. "What have you been up to hon?" she'd ask curiously, "besides taking local goddesses for lunch that is?" she'd giggle.
Last edited: Monday at 8:25 AM

"Spontaneous, yeah. I didn't plan anything out, if I'm being honest, and I didn't bother seeing if you'd actually show up first," Adelaida said, laughing. She hadn't really considered the possibility of failure. Just a gut feeling said today would be fortuitous.

With arm in arm, she led the way inside the little establishment. It wasn't the fanciest place on the island, but those were hardly something she was willing to cough up the money for without the promise or potential of getting more. Besides, she liked this place, enough to have favorite spot and enough to be recognized by the staff.

She led them to a corner booth, and offered the option to either sit opposite or just huddle close on the same side on the cushioned seats. Either was fine, and Adelaida was in a bit of a cuddly mood anyway, what with the arm around her.

"So you were a goddess. Had a feeling something was up, but considering this island, it's hardly odd. Makes me like the night out better in hindsight."

Adelaida sat down and handed a menu to her companion. "It's been a pretty quiet time, honestly. Business's slow, studies are basically done, and I've been putting the moves on a pretty girl but she's not budging. I'm not as good at getting into people's hearts as you are," she said, smiling.

"But that's all not really much to talk about. How have you been? Haven't seen you since back then. Surely the life of a goddess is more interesting than the average hollow mortal's."
"BELLI DURA DESPICIO"

Ama would sit with her, cuddling up to the other girl, giggling a bit. "Come now, gods are pretty common here," she'd smirk, "but I doubt you'll find many as pretty as me." There was a supernatural part to that, but even without that she was an attractive girl.

"Oh?" she'd tilt her head, "well, given your looks and charm I'm sure you'll get her on no time." She'd tilt her head in thought. "Though....you sure she swings our way?" she'd ask, "she could also just be a little aloof, not a bad trait, can even be attractive." She'd hum in throught, "I'm half love goddess, maybe I can help you win her over, I have s good sense of those things," quite literally, she could sense emotions.

She'd order her drink when the waitress brought them their menus. "Oh I'm afraid my life is just as mundane," she'd giggle, "that's the trade for leaving Olympus." She'd smile, "work, hanging out with friends, pretty normal life all things considered. Been meaning to hunt down a party, was to busy to find one for Samhain."

"Like most things I do nowadays, I never really bothered to plan it out in advance. If she don't swing that way, I'm sad, but that gives me the excuse to eat ice cream in bed, so I don't lose," Adelaida said, half-sighing. She didn't know if there would be any success in her efforts, and while she liked the mystery, it was a bit nerve-wracking. Not enough that she's resort to god powers for it though. "As for the god powers, I appreciate the offer, but I've never really done anything without using my own abilities for it. Besides... it's nice to be on edge for once."

Adelaida scanned through the menu, mostly out of habit. She knew it by memory for now, and just held it up so that Ama could read it while cuddling at her arm. She brought her in a little closer, and rested her head against hers. "Party, huh? We talking a night out for Samhain or your party of adventurers to go out with? Also, lemme know if you've figured out what you want."
"BELLI DURA DESPICIO"

She'd chuckle. "Nothing wrong with ice cream in bed," she'd say, looking over the menu. "Though....if you ever need any company, even just to share ice cream...or more...I'm always around," she'd say with a small grin.

Amaltheia would tap her finger on Adelaida's cheek. "You're gonna have to let me take you to a party sometime, who knows the level of mischief we could get up to."
Last edited: Today at 6:43 AM

"Ooh. I like it. Keep it casual and maybe spicy if the mood allows. I've probably already said it before when we did it the first time but my house's always open for visits, even if you don't have a key... it's probably going to stay that way too, unless I succeed with her and she asks nicely that I stop letting people into our nest."

Adelaida hadn't yet had success with the romance she was pursuing, so for now she was keeping her options open and casual.

She raised her free arm to call the attention of a waiter, the other arm still draped around Ama. It was an exceeingly comfortable position to be in. "Crostinis. Hmm."

She play-bit at the finger tapping on her cheek, and grinned. "I'm good with that, but I'm not very good at mischief, I warn you... I'm just a heavy drinker who takes someone home from the party and then they leave before breakfast."
"BELLI DURA DESPICIO"

"Mhm....and if you get her, well, I'm always up for friends with no sex hon," she'd say with a smile. "And if you and you're girl ever want some extra company well I'm always around," she'd grin.

She'd giggle when when her finger was bitten. "Keep that up and I might need to find something even more fun for you to do with that pretty mouth." She'd grin when she brought drinking up.

"Well hon....my father is Dionysus, Olympian god of wine and alcohol in general," she'd smirk. "I inherited some of his magic, I can summon a bottle of any type of alcohol at any time," she'd say, "plus alter any alcohol."
You must log in or register to reply here.
Share:
Link