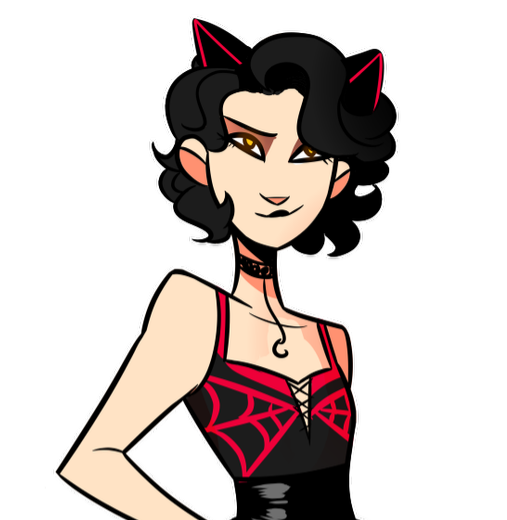 Shiro liked parties, the music and dancing, she was drawn to it all. Sure she'd calmed some since coming to the island, but she still occasionally found herself in one. Like tonight, she'd wander in, taking in the atmosphere, her body already moving to the music.

Her tail would sway behind as she wandered about, looking at the people who came. Finally her eyes would fall on a girl who was standing by herself towards her corner. Tilting her head she'd approach her.

"Heyo cutie," she'd say with a smile, "being off alone at a party is no good. Why aren't you dancing?"

Parties weren't exactly Olwen's scene. The closest thing to a "party" she had ever been to were family gatherings to celebrate various holidays. This time, her friends had talked her into it, even bribing her with the prospect of new friends or, if she looked, some cute girls to get close to.

She had donned her flowiest of party dresses, and fixed her hair in at least three different ways before she finally decided on the perfect updo. None of it dissolved the fluttery feeling in her stomach that grew as the night approached.

It was just as loud and flashy as she expected. Neither of those things particularly bothered her most of the time, but the crowd and the energy that sizzled in the air around them added to the mix already began to make her feel overwhelmed. She stuck close to her friends for a small while, but eventually she confessed that she needed a breather, and claimed a spot on the wall beside the refreshment table.

She was just beginning to settle in when she caught the eye of a sleek-looking female, one who looked much more in her element than the Dryad did.

"Cutie." Olwen could feel her cheeks warm at the feline's greeting.

"Fear of getting lost in the crowd, I suppose," the Dryad confessed.

"But getting lost in the crowd is part of the fun," she'd say with a giggle, "you never know what fun people you can meet like that." Tthe cat girl would take a step closer, her gold eyes looking her over curiously, her tail slowly swaying behind her as they spoke.

"Luckily you found me without having to get lost," she'd flash a smile, "and to think.....people say black cats cause bad luck." She wasn't technically a black cat, but the other girl didn't know that.

"Soooo...as per the rules of fateful party meetings....we have to dance," she'd smile playfully and stepped closer, "but first....what's your name hon?"

Though the Dryad seemed shy under the cat's inquisitive gaze, her smile gave away how she really felt about the attention.

"Olwen," she introduced herself, her tone sweet above the roar of the music. "And yours? Something lovely, I imagine. Though I have to be honest, miss. Dancing isn't exactly my talent."
.• ✿ •.

"Shiro," she'd say, still smiling playfully, "call me Shiro hon." The cat girl would finish her examination of the girl, satisfied, the girl was attractive and looked unique. "You have a nice look about you Olwen, and you seem sweet, more reason why you shouldn't be alone in a corner."

She'd giggle. "You assume I have any talent in it at all," she'd step to stand in front of the girl. "Dancing isn't about talent, its about moving to the music, having fun with it."

The cat girl leaned in a bit. "You're not gonna make me dance alone are you?" she'd ask pouting playfully, even making her cat ears go down a little. "I'll be lonely."

The dryad still looked hesitant, but her eyes were soft. She knew Shiro was just playing with her, but she was a sucker for looks like that. The way she made her ears droop pierced right to the dryad's heart. It made her smirk a little.

"Tsk... Well, now I can't refuse, can I?" she teased, feigning reluctance. The way the feline spoke made Olwen feel a little brave. She took a shot at being bold, and slipped her hand into Shiro's.

Her face immediately brightened and she'd give Olwen's hand a gentle squeeze. "Don't worry hon," she'd wink at her, "I'm good teacher, and you look like you'll make an amazing partner with just a little more practice."

She'd lead her towards a clearing in the dance floor, a little away from the crowd. "We'll take slow, just moving to the music," she'd take the lead, placing her partners hands in the proper spots and leading her into a dance.

"So...gonna tell me a bit about yourself?" she'd ask, tilting her head and making her cat ears wiggle a little. "You a student? You look around my age."
Last edited: Oct 12, 2019

Olwen followed Shiro's lead, her eyes skipping a few times between their feet, the placement of her hands, and the look on her dance partner's face. Thankfully the song that filled the room wasn't too energetic, giving her a change to adjust.

"I am a student, yes," she replied, sounding a little flustered. "I'm in the tenth grade. Yourself? I might have seen you around, actually."
.• ✿ •.

"Yup, tenth grade too," she'd giggle, "no classes together unfortunately." She'd flash a playful smile, "I'm the mischievous, moody, goth chick that everyone thinks is pure fun or pure bitch," she'd say with another giggle followed by a wink at her. That wasn't completely true, there were a lot of rumors surrounding her.

She'd continue to lead her partner in the slow dance, smiling and enjoying it. "So, tenth grade like me, bit whatcha like to do?" she'd ask curiously, tilting her head a little, "any interesting hobbies?"

The song would continue and more people would pile in, Shiro would make sure to keep them clear of the growing crowd. "Me? I'm a witch, my hobby is magic and parties," she'd smile, "and this party is especially good, dancing with a sweet attractive girl."

The dryad couldn't help but giggle herself, her cheeks getting warm all over again. Shiro was relentless in her flirting.

The dance was slowly beginning to feel more natural to Olwen. Her feet moved in time with the music, and her hips began to sway more fluidly as she let go of her restraint.

"Indeed, it is lovely. I didn't expect to be swept off my feet at my first party. Guess I got lucky," she said with a sensual curve of her lip.

"What I like to do, mm... Well, I suppose my favourite and most interesting hobby would be fencing," she mused. "I love the thrill."
.• ✿ •.