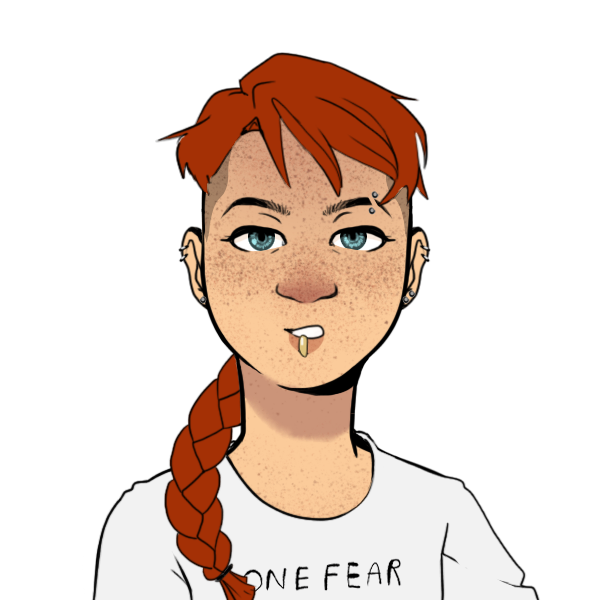 Image was made using this Maker by IrisGallowayArt on Instagram.

Tilly is a very tired young adult. She tends to carry a look of perpetual jadedness and exhaustion, or else cynical amusement. She stands at an average 5'5" tall with a somewhat plump build. Her entire body is heavily freckled and her auburn red hair is cut into an undercut with a long section in the back that she usually braids into a thick ponytail. Her eyes are vivid, almost unnatural blue.

Tilly's style tends towards comfort and ease of movement: she never knows when she is going to have to deal with one of the many monsters that constantly follow her. She has several piercings and regularly swaps them out, save for one: her lip piercing which she almost always has in. She is, by necessity, a t-shirt, sweatpants, and combat boots type of girl. She also rarely bothers with make up because it tends to get messed up when she suddenly has a crisis.

Tilly is never seen not wearing a cheap plastic Disney Princess bracelet around one of her wrists. She has a recent tattoo, a set of light pink roses spanning her right shoulder. These are covering a particularly nasty scar that didn't quite heal right when she first arrived on the island.
personality
Tilly was once a bright eyed young girl who practically vibrated with excitement at the prospect of being a real, bona fide monster hunter. But after fifteen years of having her life interrupted, she's kind of done with it all. She still fights because she's the only one who can (and the monsters aren't going to stop just because she doesn't feel up to it that day), but she'd give anything to give it up.

She's missed out on a lot of things that she wishes she could have done: no first kiss, no dating, no friends really either. She tends to be closed off, as she couldn't exactly tell anyone what was going on with her and even if she did they just thought that she was crazy. Even seeing the supernatural around her on Manta Carlos, she isn't convinced she won't still end up isolated and ostracized.
abilities
Active
Skelp, Divine War Hammer
Tilly can summon a magical war hammer into her hands at any time. It is indestructible, can summon bolts of magical lightning, and creates such concussive force on impact as to punch a hole through several feet of solid steel. Neither it, nor its focus (a cheap Disney princess bracelet that she wears) can be taken from Tilly by any means. The hammer does not exist on this plane and therefore cannot be perceived, interacted with, or hit anything residing on this plane other than Tilly.

Passive
Bearer of the Sapphire Spark
Tilly has, in place of a heart, a magical gemstone. It functions like a normal heart but its main purpose is to bridge a gap between this plane of existence and another, otherwise completely inaccessible plane. So long as the Spark is inside of a living creature, that creature exists on its own home plane but can interact with the other connected plane as though they were there. Should the Spark be removed from the host, they will die immediately.

Living in Two Worlds
Because she can interact with the other plane that the Spark is attached to, Tilly can seemingly run on air or water in areas where there is solid ground in that world but not here. She cannot phase through objects in either plane and must therefore maneuver more carefully than others might.

Bearer's Might
Tilly has the absolute maximum strength, agility, speed, and endurance that is physically possible for a human to possess. This requires no exercise to maintain. She also recovers from wounds and illnesses at a rate roughly five times faster than a normal human.

Weakness
Bearer of the Sapphire Spark
Due to her status as the Spark's current bearer, Tilly is beset by monsters from the plane that she is connected to. She is the only one who can perceive or interact with these monsters, who range in size from as small as a cat to as large as a sky scraper. Smaller monsters are more common while larger ones appear infrequently. These monsters can interact with and injure Tilly normally. Their purpose is to take the Spark from her and use it to gain access to this plane of reality.

biography
Matilda Wallace was a bright eyed ten year old girl, full of hope and goodness the night that the nameless Being appeared in her bedroom. It told her that she had been chosen to be a champion of justice and peace and to defeat monsters that threatened to invade her world. She was ecstatic, even when the Being pushed a blue stone through her sternum and into her chest. She chose the name and focus for her divine weapon, a majestic war hammer. Her parents, of course, didn't believe her the next day when she told them. Overactive imagination and too much sugar before bed. This first interaction would set the tone for much of the rest of her life.

Her teachers got suspicious when Tilly kept showing up to school bruised and scratched. There was an investigation that ended in the young girl being separated from her parents. Tilly was bounced around from home to home, many of her encounters ending in a handful of similar ways: being taken away for signs of abuse or else being sent back for being 'possessed' or 'unruly.' She had a hard time making friends, as she always had to run off to fight monsters that no one else could see. She missed out on her first kiss at a riverside bonfire because a thirty meter long serpent decided to try and drag her underwater. In high school she was the weird girl, the freak who still believed in monsters and fairies. She stopped talking about her duty as the Sapphire Spark.

Going to university was out of the question. Holding down a steady job was next to impossible. The rise of gig work helped her make end's meet, but Tilly had long become disillusioned to the glamour she thought her sacred duty had given her. The last of her friends left her behind when they saw her in a car park swinging her empty hands around like a crazy person with a broom.

She might have lived and died completely off the Veil's radar except that once, finally, someone caught something on tape. A monster had taken a swipe at Tilly and cut open a long section of her forearm in the process. The video didn't go viral, but it got enough hits online that the Veil agents took notice and took it down.
Resources
Works like, five different gig jobs and has a van that she maintains herself. She currently lives out of the back of said van.
additional info
Last edited: Sep 20, 2019
Primary and Supporting Characters || Named NPCS

Abilities Summary: Has a magic gemstone in place of a heart. Peak human physicality. Faster than normal healing. Can walk on air and water. Sometimes gets knocked around and injured from seemingly nothing.

Reputation: She's new, but a number of people already seemingly have seen her delivering food or doing other gig work type jobs.

Misc Information: Image was made using this Maker by IrisGallowayArt on Instagram.