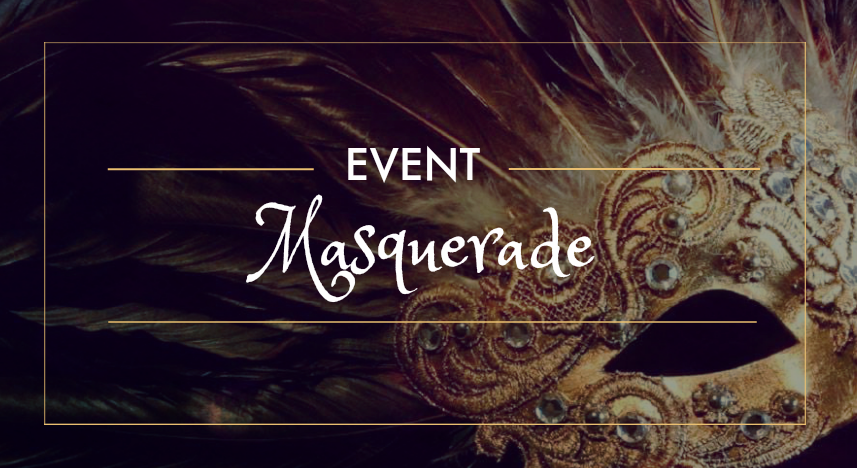 You step into the Ballroom.

It's a sight out of a fairy tale book with a haunted, gothic twist. The room is decorated with an elegant harvest theme. A palette of autumn colors, violets, and blacks are used in curtains, carpets, table clothes, and other decorations. There are pumpkin gourds elegantly carved on the tables, vines and cobwebs wind around and between the marble columns. The flowers used, in vases and wall decor, are dried and wilted. The overall look is nothing less than haunting.

And the people! Why, it's almost as if they're part of the decorations. Ladies in extravagant, puffy ball gowns dancing with gentlemen in sharp suits to waltzes, all of them wearing colorful masks, concealing their identity. The crowd is nothing but inviting.

Will you join them?

No post order, and rapid posting recommended. Open to all residents of the island. The Ball begins just before dusk on October 31st. 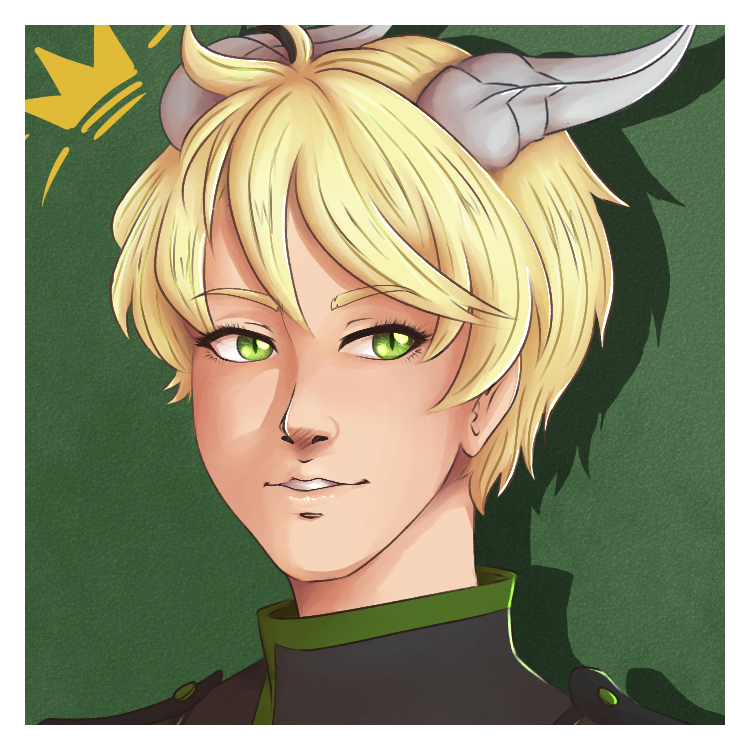 Arno would slip in, wearing a simple black and yellow mask and matching suit. He'd make his way to the snack bar, helping himself to a cup of punch.

Alyx strolled into the ball with a smile on his face. Anne had asked if he wanted to go, and seeing how excited she was, there was no way he would have said no to her. Since then, he was pulled from store to store finding just the right outfits.​
​
Now here he was. Black pants and jacket with a red shirt matching in tone to his mask. The final detail was a blue tie that could have been cut from the same material as Anne's dress it matched so closely.​

Tasha had been getting pestered at Wolf's Den by her employees if she was going to attend the ball. She kept changing the subject and dismissing it until she finally told her youngest employee that she would, if the girl asked her crush to go.​
​
So when Tasha heard the boy had accepted, she knew she had to find the perfect dress. And did she ever. A dark burgundy color that accented her skin tone perfectly. A long nearly hip high slit that showed off her muscular legs. And finally a V cut neck line with straps that hung off her shoulders intentionally.​
​
A gold mask adorned her face with a matching red flower off to one side. Red eye shadow filled in the surface in the holes for her eyes that the mask didn't cover completing the look. Now to find someone fun.​
Stefan Jogstad
Adryan Speed
Levina Cromwell
Tasha Olcan
Elijah
Cris Covaci
Alyx Assath

Anne had been waiting for an opportunity like this since she was ten. Not just to go to a fancy ball, she'd been to plenty of those with her family, but this time it was different. Since she was a kid, one of her siblings or cousins or someone had always coordinated outfits with their date and they always looked amazing.​
​
That's why, now that she'd got a boyfriend- a great one at that for putting up with all her fussing over how the two should dress- she finally got to live out one of her girlhood dreams. Her mask was a mirror image of Alyx's, her dress the same blue as his tie and accented with the same red as his shirt.​

Alyx offered his arm to his date with a charming smile on his face. She had been so excited about this, and Alyx loved seeing her happy. Besides, this masquerade ball, thing, whatever, could end up being fun.​
​
"I still can't get over how great you look. Wanna grab a drink before more people show up?"​
​
The hotshot pilot motioned over to the table with the refreshments at it. He wasn't sure of exact formalities at things like this, but Alyx didn't embarrass easy, so that wasn't at the top of his mind. He just wanted to enjoy this evening with Anne as much as he could.​
Stefan Jogstad
Adryan Speed
Levina Cromwell
Tasha Olcan
Elijah
Cris Covaci
Alyx Assath 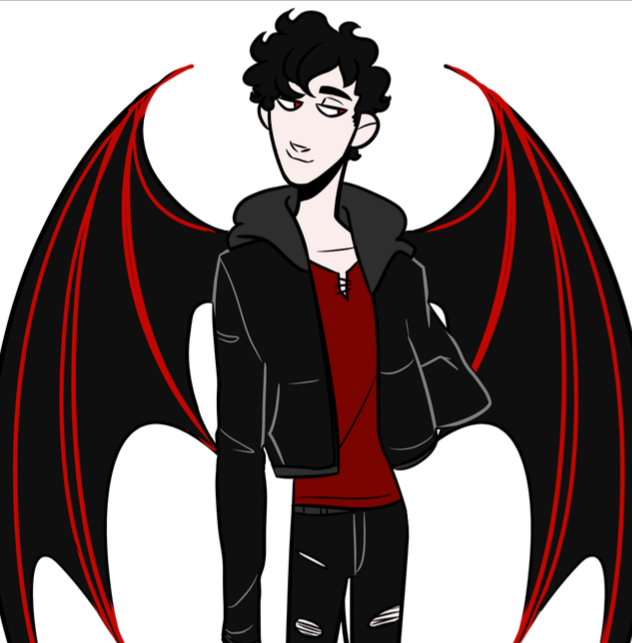 Aaron would enter, wearing a red and black tux, his wings draped over his shoulders like a cloak. His make was simple but elegant, red and black, with the colors mixing in the middle. The vampiric demon quite loved the ball, parties in general, though he usually preferred a wilder event this one would do well enough. He'd wander in, glancing about curious about who he'd see. @Big Jeffe

Anne was already able to tell that this was mercifully less formal than the stiff events she was more used to. She kept a hold on Alyx's arm, her posture and the way she walked still shaped by her upbringing while she headed over to get a drink with him.​
​
"Yeah, that's probably for the best. I need to break out of 'Skjeggestad daughter at the winter formal' mode and I think a drink would help a lot," She said with a short laugh. Happy as she was, she was still just the slightest bit nervous.​
​
@Stefan ​

Alyx chuckled at her comment and lead her over to where the drinks were. Pouring her a bit of the punch and taking some for himself, he smiled when he looked back to her. Holding the cup up a bit in a small cheers, his voice was relaxed confident as ever.​
​
"Then here's to taking the edge off."​
​
He took a sip of his drink and smiled happily at the taste. It was actually rather good. A solid mix of alcohol to the actual punch, which itself was very good.​
​
"So how does all this wo--"​
​
"Anne? It is Anne right? Boy would that be embarrassing."​
​
Alyx was interrupted by a raspy voice. Tasha had spent a moment looking around to see if on the off chance she recognized someone. Lucky for her she had. They had met at the Grey Raven once not long ago, but that never stopped the werewolf from making quick friends.​
​
She poured herself a bit of the punch as well. Tasha checked the top of her dress unconsciously. Not having anything on her shoulders was odd, but it was always nice to show off, and that was just what the dress did.​
​
@Abbysaurus ​
Stefan Jogstad
Adryan Speed
Levina Cromwell
Tasha Olcan
Elijah
Cris Covaci
Alyx Assath

Anne jumped at the sudden sound, but she relaxed once she realized that she did, in fact, recognize who it was who was talking to her. She smiled at Tasha, taking a drink to get her nerves settled.​
​
"Hey, yeah, Tasha, right? It's good to see you!" She smiled, glancing back towards Alyx.​
​
"So, this is that boyfriend I mentioned." She ushered him forward a bit. She was only showing off a little.​
​
@Stefan ​

Alyx put on his charming as ever smile and held a hand out to Tasha. He couldn't help but noticed the toned features of her shoulders and the leg that was shown from the slit. Anne sure did have a good eye for meeting people.​
​
"So these are the secrets you are keeping from me hun?"​
​
His voice was playful and light. Exactly what he wanted this evening to be. It was easy to tell that Anne was still wound up tight, and hopefully some light hearted conversation would get her to relax some.​
​
Tasha chuckled as she shook Alyx's hand with a firm grip. She was used to looks and comments, but this one was so very obvious, and in front of his girlfriend. She could only assume that had a more open relationship.​
​
"It's a pleasure to finally meet you after how much Anne has talked you up. You don't disappoint either."​
​
She tacked on a subtle nose flare, realising that a wink would be seen. Letting go of his hand, she turned more towards Anne and very deliberately and obviously looked her up and down.​
​
"Bravo girl. The red tacked in as an accent to match the hair. Perfect. You even got the boy toy to clean up decently."​
​
@Abbysaurus ​
Stefan Jogstad
Adryan Speed
Levina Cromwell
Tasha Olcan
Elijah
Cris Covaci
Alyx Assath
You must log in or register to reply here.
Share:
Link