Appearance Description: He stands at 5'11” with the signature Drakenhardt red hair. Unlike his relatives though his eyes are red as opposed to the standard green. He's thin but athletic, built like a swimmer. He also sports a set of naturally sharp teeth. In terms of fashion he favors anything that's “in”, Marric dresses like the average person in their twenties. 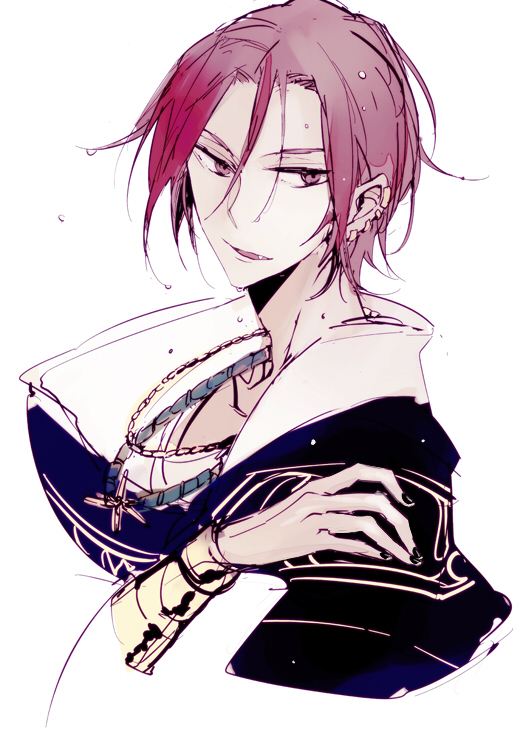 Art of Rin Matsuoka from Free by pol
Marric possesses a smaller amphibious dragon form for smaller bodies of water and traveling on land. It possesses blue scales, is quadrupedal, and is about fifty feet long. 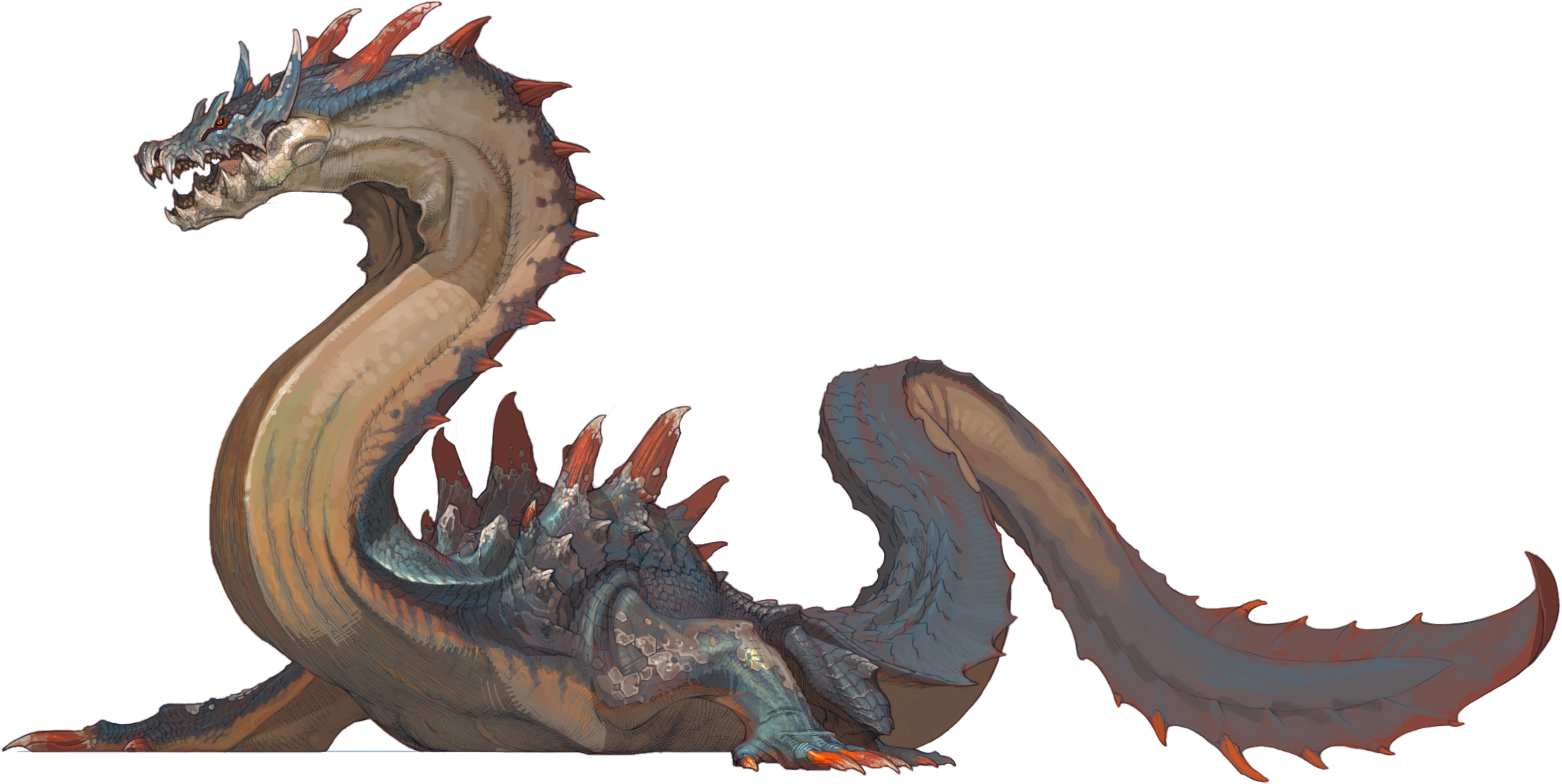 Official art of Lagiacrus from Monster Hunter
His full dragon form is blue, long and serpentine, pushing just past 200 feet in length. He has hard scales that run the length of his body. Marric sports a set of back pointing horns and a single blade like horn on the top of his head. Being a sea dragon, he is fully adapted to moving through water. His limbs are like flippers, similar to sea turtles with the exception of the claws that protrude from them. His underdeveloped wings also function as dorsal fins when in this form. 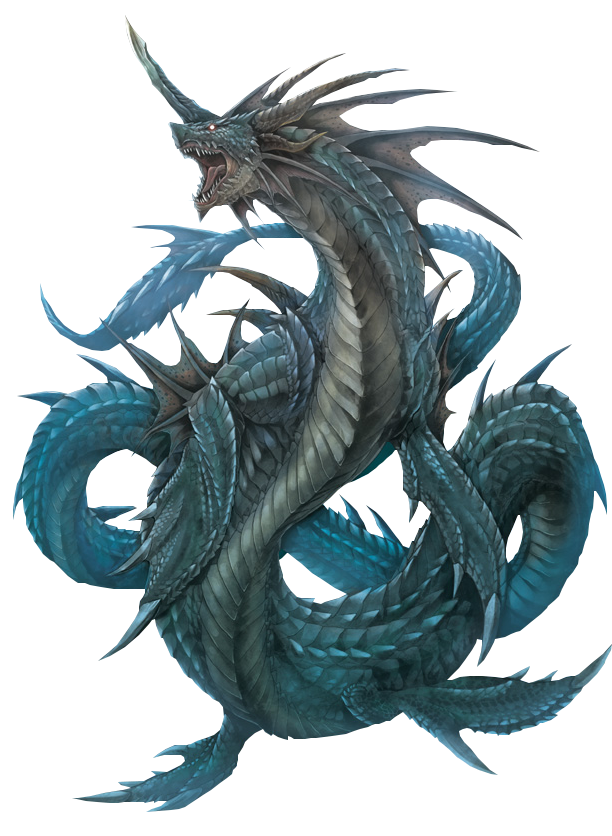 Official card art of Leviathan, the Tyrant of Ocean from Force of Will
Personality Description: Marric is a free spirited cheerful sort, almost never seen without a smile. He's naturally friendly and outgoing, he tends to put out that general demeanor, unlike his more serious relatives. He's often humming a tune, or singing to himself. He's known for being an adventurous type, having traveled for a good portion of his life. He's almost always looking for a new experience. Marric is unusually laid back, however when he needs to be serious he'll quickly shift gears. As is a staple trait for his species, he's actually very prideful and holds himself in high esteem which can rub people the wrong way, but they probably weren't worth his time anyway. He's also very possessive, another trait that's rather common of his kind. He's protective and loyal to his family and friends, and his hoard which is a hoard of pearls of various sized and origins.


Active Abilities:
Water manipulation: Marric can manipulates water via body movement or sound waves. He can move up to 500 gallons through body movement 1000 gallons via sound. While movements with his body are limited, the more intricate the melody, the more he can do with the water. He cannot create water out of thin air using this method, but he can gather moisture in the air and from other sources. From there he can launch the water as powerful projectiles or move it in intricate patterns. Marric can also influence standing bodies of water and walk on their surface. He cannot create ice, however he can draw water from ice sources. He can also create mist, and with a focused enough melody or in combination with a fire user, a steam explosion.
When in his dragon form Marric uses the water to accelerate himself at high speeds and create and generate whirlpools. His breath is a blast of scalding hot pressurized water that's able to punch through steel. Similar to a hose he can adjust the pressure so that it still retains the force of a fire hose. He can only fire his breath at maximum pressure in short five second bursts with a cool down period of five minutes.

Lady Sedna: This is his sentient, fae touched, indestructible guitar. It requires no amp or anything of the sort, and can take the shape of any guitar Marric wants her to… so long as he asks. Otherwise, she will literally stop speaking to him and won’t make a sound if played.

Shifting: Like much of his family, Marric can shift between human and dragon forms. He’s capable of partial shifting. He also has the ability to shift into a “merfolk” form. As well as a smaller fully amphibious form.

Passive Abilities:
Physique: In either form he is capable of breathing both air and water. When in the water he grows a set of gills on his neck an gets webbing in between his fingers. He also sports a set of razor sharp shark like teeth. Marric's possesses average vision, but he does have senses of hearing and smelling on par with wolves. Marric can lift one ton and run up to sixty mph.
His scales are hard and armor like requiring high caliber weapons or weapons specifically designed to slay dragons.

Mark of the Fae: He's been marked as a friend by fae after saving one's life. Only other fae can see this.

Immortality: Marric can live for an indefinite period of time so long as he’s not killed.

Weaknesses: Being a water dragon, Marric’s primary weakness is electricity. Electricity has an amplified effect on him even if he is on dry land and is even worse when he's actually in the water.

Resources: Member of the Drakenhardts, is a local musician with a band.

Biography: Marric Drakenhardt spent a good portion of his early life moving from place to place. His parents loved to travel and often would visit exotic places. He's always had a sort of knack for music which prompted him to go out of his way to seek out more musically inclined species when he finally set out on his own. He took up a living as a musician, traveling the world and performing dazzling shows with dancing water and great music.
Given his ability to travel on land and by sea, Marric has seen and performed in many places and performed at countless venues. Naturally, he's also been on many adventures on the side. He never truly gained any real notoriety, which was fine with him as he preferred not to get too tied down. In the early 90's he came to acquire his signature guitar after saving the life of a fae. He was also marked as a friend. After traveling for a bit more Marric finally decided to set up a permanent residence on Manta Carlos with the rest of his kin.

Remember to post all relevant claims for this character.

Notable Features: The guy has sharp teeth like a shark. Red eyes. Has an air of dignity in spite of his aloof nature and poor posture. Usually has his guitar on him. Sometimes is a big ole sea serpent


Physical Quirks: He sounds about as laid back as he is, pretty chill 24/7. For all his chill he will occasionally snap into a blunt serious demeanor if he's irritated enough. Has a bit of a sing song tone to him as well. Often hums when he's bored.

Reputation: Front man for Hypersonic Kraken Uneashed, one of the billions of Drakenhardts living in Manta Carlos. He has a pond in his back yard. Also seems to just draw mermaids in...

Misc Information: Swims in the ocean at least once a week regardless of the time of year. Almost exclusively eats seafood. Has a ton of stories from his travels. Alex's mom hates his music. If you give him a song he will find a way to play it.
Art of Rin Matsuoka from Free by pol