Cambrissa's mind was all over the place. Most of the crew was out, leaving her basically alone to herself. She had to finish her diagnostics checks, but that was basically running itself. She was also working on the change to her Avatar, using the database of alien species she had on hand as a template. But she was bored, and wanted something to do. She flipped through the cameras and sensors, noticing that Xeros was still on the ship.

She frowned internally, calculating how many times she had seen him leave the ship. Not as many as the others. Was something wrong, she wondered? Well, there was only one way to find out.

Her nanite cluster poured out of a port near Xeros' room, pulling itself together into her familiar bubblegum pink form. She knocked on the door, knowing that this was the polite thing to do rather than simply barging in. The whole ship may have been her body, technically, but privacy - or perceived privacy - was important to flesh and blood beings.

"Xeros," she called out, an inquisitive lilt to her voice. "Are you in there?" She knew he was, of course. But again. Perceptions. If something was wrong, he might be less inclined to talk if he were put off by the idea of her watching him. 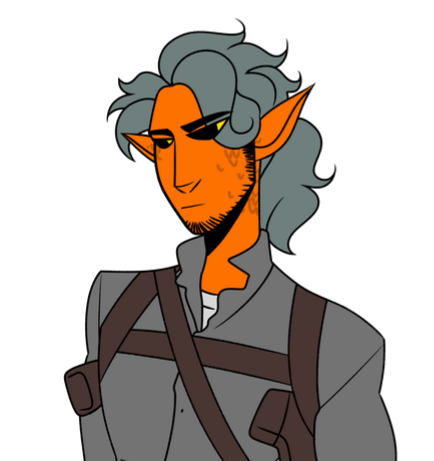 Xeros had only left the ship a handful of times, usually to spend time with his new friend Luna. Besides that he'd remained on the ship, reading, studying Earth culture, learning about his human heritage. So he sat cross legged on the floor of his room, flipping through a book that his tail held. His room was neat and tidy, everything had its place.

It was then he heard the knock at his door, Cambrissa calling out to him. The half alien would grumpily grunt and stand. "You know I am," his tail would grab onto the door latch, pulling it open. "You need something?" he'd ask the pink A.I., his tail reaching up and scratching the back of his head.

Treyoo would poke his head out of the collar of Xeros's shirt, the creatures four reptilian eyes blinking at Cambrissa. "He's trying to beg for snacks," he'd say with a snort, gently petting the alien reptile's head.

Cambrissa's smile fell when Xeros indicated that he knew that she knew that he hadn't left. She sighed, but returned to her bubbly facade by the time he had opened the door to his room.

Lacing her fingers behind her back, she rocked on her heels for a second as if considering something. "Well, I kind of do, yeah... if you're not busy I mean."

"See..." she continued, her digital brain connecting to different parts of the ship to get the medical Bay on the floor below ready for the idea she had in mind.

"I met someone the other day who looks exactly like me. And, well... it was exciting! But also scary. Because I realized after the fact that my avatar, it's standard for all Cambrissa class ships made by Galactica Corp."

*Sooooo... I was thinking, to help us hide better, I should change up my appearance. And I thought maybe you might be able to help me make some aesthetic decisions?"

She paused, looking at his little pet for a moment. "And we can get some snacks for Treyoo while we're at it."
Primary and Supporting Characters || Named NPCS

Xeros would hum in thought, as an assassin he was skilled at hiding, blending in. "Fine, yeah I'll help," his tail would grab his coat from a hook, setting it over his shoulders. "We should design an avatar that's less...colorful, less flashy," he suspected that she wasn't going to like that idea.

The half alien would step out of his room, Treyoo scurrying up and sitting on his head. "Using elements of different species would make it more versatile, able to blind in in different environments."

His tail would wrap around his waist like a tail. "Did you have any ideas yet?" he was expecting her to have many many.

"Less flashy? Oh c'mon. It's Xerry. I can't just not be hot. What would my fans think?"

She laughed and grabbed onto his arm, leading him back to the dance floor where she had set up the hologram projectors to show off the designs she had been working on.

"I have a few ideas, yeah. I've been going through my species databases to put together a few ideas."

Giving his arm a squeeze, Cambrissa slipped away from Xeros and spun towards the center of the dance floor. "Apparently the Terrans think aliens are green, at least outside of Manta Carlos. So I thought that green would be a good place to start."

As she spoke, her entire form turned to a muted green color, almost like moss, but darker. "I want to keep some of my pink though. It is my favorite color, ya know?"
Primary and Supporting Characters || Named NPCS

Xeros would follow his artificial friend, his tail swaying behind him, a sign he was enjoying himself despite his grumpy demeanor. "Less flashy means you'll blend in more...but I'm sure we can figure something out that you'll like."

"Green or gray," he'd say, tilting his head. "Apparently the grey like experimenting on them for some reason," he had no idea why aliens would want to experiment on them.

He'd look over her as her color changed, stepping over to her he'd circle around her. "Tattoos are common enough, so a few pink tattoos, we can look up some designs." He'd stop circling once on front of her again.

"Maybe your hair?" he'd scratch his cheek. "I've seen some people here with pink in their hair." His tail would tap on the floor as he thought. "Do you want to stay humanoid? Or try other types of forms?"

Tapping her chin, Cambrissa's grin winded at the suggestions that Xeros gave. "Oh I like that. I can do both, tattoos and..." her form wobbled slightly for a moment, her hair growing longer and turning an ombré, going from dark pink at the 'roots' and growing lighter towards the tip.

"I like the way you think though. I was only thinking of bidepal forms, because that's what I've always had. But I could do so much! And I can always change to have legs temporarily if I need them."

Flashing Xeros a wink and a grin, Cambrissa turned around and pulled up a holographic representation of her species database. She pulled up a ton of different kinds, ranging from having dozens of legs to having none at all. She gestured forward to the images, shifting away her clothes so that she could more easily transform.

With a aquiet hum he'd step over to the database. "Knowing you...you'll want something exotic," he'd flip through the database. "Exotic....but it should also be something that isn't too uncommon."

"What about something serpentine?" he'd show her a few species, particularly pointing out the lamia. "You could even have the tail be flexible enough to be an extra pair of hands."

The half alien would look at her, the grumpy man offering a small smile. "What do you think?"

"I like the way you think, Xerry," Cambrissa said with a grin. She slid through the options, putting several files away until she found several serpentine species. A good many of them had a lot of extra adornments, but she had to keep her own mass limitations in mind. She didn't want to be itsy bitsy.

Her nanite cluster changed again, this time her legs fusing together into a long, slender snake tail. She kept the obvious definition of her hips, but adjusted her appearance elsewhere to make up for the change in mass distribution. Smaller breasts, no nose or ears. She didn't need them anyway.

"Well?" she said, coiling in a loose circle around Xeros, her eyes shifting to be solid yellow rather than keep their metallic black sclera. "What do you think?"
Primary and Supporting Characters || Named NPCS

He'd tilt his head, watching as she shifted her form, his cat like eyes looking her over she'd finished, raising an eyebrow when she loosely coiled around him. "It suits you," he'd hand would go to her chin, gently tilting it as she looked her over.

"I knew you'd like the exotic serpentine form," he'd look her over again, it was a pleasant form, offering her a small smile. "Seems like it'll be useful."