Malara dresses to turn heads. Whether it's barely there cut-off denim shorts and a shirt that might as well be a bra or a dress with a neckline that practically reaches her belly button, Malara doesn't dress "normally." She has a fondness for soft furs and capes and hates wearing shoes if she can help it. 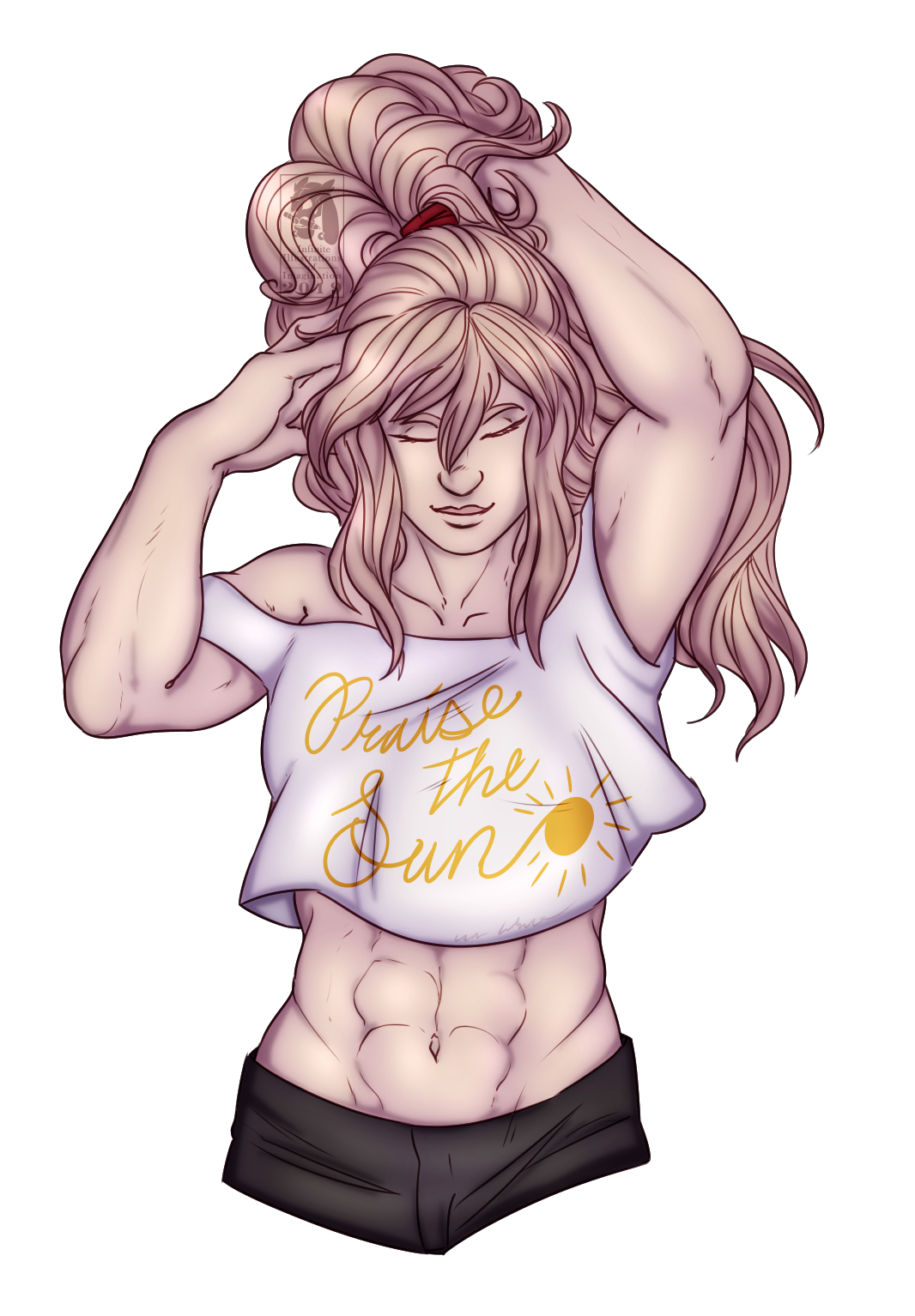 Art by i3-byusagi
personality
Malara is a bombastic personality, loud and in charge. She generally plays by her own rules and follows along with the laws around her because limitations make life more fun. She is a god after all, and has eternity to enjoy herself. She throws herself into pleasure and pain alike, relishing new experiences and enjoying reliving old ones.

Beneath this, Malara isn't the hedonistic berserker she seems. She has a long view of the world, having seen empires rise and fall in relatively no time at all. A part of her hates this detachment, because she craves personal relationships with people. But she also uses it as a crutch, keeping herself more at arm's length to stop herself from getting hurt.
abilities
Actives
Divine Arms
Malara has two divine weapons that she can summon to her side. Both are indestructible. She can only summon one at a time and must wait a minute between dismissing one to summon the other.
Ecstasy is a golden mace whose handle can change length to allow it to be used one or two-handed. At Malara's urging it can become immovable until she wishes for it to be.
Heart Biter is a rainbow greatsword. Its blade phases through armor and tough hide to strike at the flesh beneath.

All Souls
Malara can fuse any willing sapient creature into herself without increasing her mass. This process is instantaneous for human sized or smaller individuals and takes longer for larger beings. Beings she fuses into herself are in a time locked state: they need no food or sleep and they do not age or sense the outside world. They survive as long as Malara does. Malara can release any being she has fused into herself.

Deify and Worship
Malara can choose to hear, in her mind, any thought or phrase (spoken, written, or typed) about her anywhere on whatever planet she is currently on. She can communicate back to these people telepathically, but only within a minute of them thinking about her.

Passives
Sacrificial Healing
Whenever Malara takes damage, one of the entities she has fused into herself automatically take the damage instead. Malara immediately regenerates when the damage is transferred. If the damage would be fatal, the person fused inside Malara dies and passes into Malara's personal heaven. They cannot be unfused from Malara at this point.

Legion's Mind
Mental and soul-based effects on Malara are diluted based on the number of entities she has fused into herself. If she has one hundred entities within her, such abilities will only affect her at 1/100th their normal capacity.

Divine Physique
Malara is at peak human capability, physically speaking. She does not get tired and is immune to natural diseases. She is also an ageless immortal and will not die of natural causes. She can shapeshift herself to be sexually compatible with any partner she takes and can induce or inhibit pregnancy in herself or her partner, regardless of normal fertility.

Combat Awareness
Malara's mind is tuned to be aware of everything around her all the time. So long as she has at least two of her senses, she cannot be flanked or snuck up on.

Weaknesses
The Adversary
Malara is guilty of heinous crimes against divinity and she is marked forever because of it. Any Prax, god, demigod, angel, demon or other divinely aligned supernatural entity is aware that Malara killed and devoured another god. They instinctively see her as an enemy and are wary of her, and act accordingly within their nature. This can be overcome given time and getting to know her, but the whispers of doubt never truly leave.

Take Only What is Offered
If Malara attacks anyone who has not attacked her first or agreed to battle her, she rapidly weakens until she cannot move. She can only move again if she actively swears to stop attacking the individual or individuals. If she breaks that oath within twenty-four hours of making it, she will fall unconscious for a week.
biography
Malara's first several million years are irrelevant.

She spent much of her time in the previous twelve hundred years conquering and destroying world's in Khalida's name alongside her brother, Afzal. Afzal eventually began flexing his powers until he created a species of people, the Prax. Malara helped influence their culture until such a time as Khalida banished Afzal for overstepping his boundaries. Malara attempted to fight Khalida and was banished to Earth as well.

On Earth, she reconnected with her brother, who had apparently lost his memories and was going by Vatar. She got a job as a fashion model. She started getting into romantic relationships, first starting with her Right Hand, Jafar, and then the Spider Demon Pandora. Many of these relationships ended badly, given her inability to love the way that mortals did and her inexperience with emotional attachment. She had a daughter with Pandora, named Dalia.

Eventually Malara took over the fashion and modeling companies that she worked for, cementing herself as a public figure. She fought the Centipede Demon Nasci for threatening her loved ones and generally tried to find a balance between her nature and doing 'good.'

Recently, she went to Mes, the home world of the Prax with a man named Jackal and challenged her mother again. The two were victorious and Malara devoured Khalida, regaining her full godhood. Things didn't go better from here, as her husband Jafar was kidnapped and the results of her killing Khalida created problems back on Mes. Her wife Pandora left here, going back to Hell to try and take over despite their daughter being very ill.
resources
CEO of Theia Modeling Agency and Muse Fashion. Owns a penthouse downtown. Has a degree of disposable income. Owns a golden throne shaped like a skull.
additional info
Last edited: Mar 29, 2019
Primary and Supporting Characters || Named NPCS

Physical Quirks: Speaks and carries herself like royalty. Tends to look at people like she's sizing them up, rather than just seeing them.

Power Summary: Peak physicality, immune to natural diseases. Combat Awareness, very difficult to surprise. Has a divinely powered mace and a divinely powered sword. Can shape shift to accommodate any kind of sex and choose whether or not to get pregnant/get her partner pregnant. Can gain superhuman physical stats. Regeneration. Two prior based on how many willing people she has absorbed into her.

Becomes paralyzed if she attacks someone unprovoked. Pings to divine entites (including demons) and Prax as a god killer and an enemy/someone not to be trusted.

Reputation: Malara is the CEO of both the Theia Talent/Modeling Agency and Muse Fashion. She is also known for being loud and exuberant. She has a presence in the legal fighting arena on the island, where she is known for playing out a fight longer than it needs to go on for her own entertainment.

Misc Information: Art is a commission by i3-byusagi.