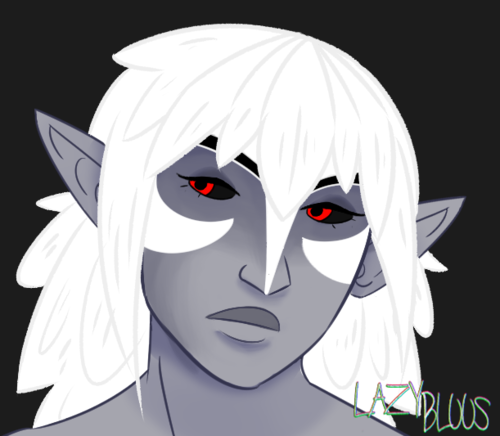 
APPEARANCE​
Lynn is noticeably not human. They have long pointed ears, fangs, a long lizard like tongue, and Oh yeah, Lynn's hair isn’t even actually hair. Lynn “hair” is really just silver/white feathers which are more noticeable the closer a person looks. Lynn's eyes are also ruby red. Lynn also have feathers under arms (almost like wings) back, legs, aaaand has a tail of feathers. They have talons on their fingers instead of nails and digitgrade talon feet.
Lynn's skin is grey.

Lynn dresses very casual. He tends to wear long sleeves and anything else that fully covers him head to toe. He does wear some Asgardian garb but only for special occasions such as his street performances.

PERSONALITY​
They aren't spectacular and seems like a very boring person to be around with. Or is that what they wants you to think? Ha.

It is in his nature, his GENES to be a mischievous little brat. Lynn is more lowkey about it though. He usually likes being noticed less because having a lot of attention on him is…..bothersome.
He is a plotter at heart, a cold hearted prankster who would let a single joke go on for days and days and days and days.

Lynn doesn’t like loud noises or big crowds. He tends to usually avoid them or just be in the back somewhere.

The things Lynn loves the most is his flute and music. It's actually the only gift he got from his father that wasn’t super half assed or a joke gift.

Lynn also tends to hold grudges longer. Probably due to being half fae.​

Active Abilities:​
Wyrdwood Flute: Fygg
Fygg is a enchanted wooden Flute that allows Lynn to seduce and charm any animal or bugs into their submission. Each animal and insect has their own “melody” that Lynn plays to entrance them. He can only control one type of animal or bug at a time due to this. The songs Lynn plays with Fygg work like similar to a dog whistle but is much more effective. The flutes magical effects has a range of 100 meters around.

Fygg can also affect any shifters or anyone with animal or insect like features. The effect isn’t as strong for them as it is for non-sapient animals & insects but they can still be drawn to Lynn’s music. He can’t outright control sapient animals or shifters with his flute like he would with normal animals but they will simply be charmed by his music. It will always be pleasing for them to hear.

The flute is able to repair itself from any form of damage and will always finds it way to Lynn’s hand whenever Lynn wants to use it. Fygg is living in the sense that the wood and plant material that makes it is alive. Lynn is the only able to use Fygg.
​
Flute Magic
By channeling their magic into a flute, Lynn is able to cast music based spells with varying effects. Each song takes about 30 seconds of listening for the song's effects to begin to work, a full minute of listening to the song will allow the magic to work at it's fullest. Anyone up to 10ft away will begin to feel the full effects of the songs.


Song of Slumber: Anyone of hearing range of Lynn when they play the Sleep song will start to feel drowsy and eventually be put asleep for up to 30 minutes even after Lynn finishes the song.

Song of Happiness: Anyone of hearing range of Lynn when they play the Song of Happiness will start to feel more relaxed, calm, and happy until Lynn stops playing the song.

Song of Encouragement: Anyone of hearing range of Lynn choosing will feel fully energized, encouraged, and will be healed of any flesh wounds and pain while Lynn plays the song of Encouragement.​
Sex-shifting
Can adopt any combination of masculine or feminine sexual characteristics at will.

Mythical Shifting
Lynn is able to partially shift into a few mythical creatures.
​
Dragon: Lynn can partially shift into a dragon. When Lynn shifts; They can grow horns, a tail, and other dragon parts at will. While in their partial dragon form, Lynn becomes stronger and faster. They are able to lift a ton and are fast enough to dodge bullets. Their scales and skin become durable enough to withstand more blunt force damage and their claws, horns, and teeth are sharp enough to rip through flesh. Lynn’s ability to see and smell also increases enough to track people's scent or animals. Lynn can breath white fire and is immune to heat in this form.

Pegasustaur: Lynn can somewhat shapeshift into a pegasus. From waist down, their lower half is replaced with the body of an all white horse. Their lower half is as strong as a normal full grown healthy horse. Lynn’s wings are replaced with pegasus wings which allows them to be a better flyer as well as to allow to fly faster. They easily adapt to high and low air pressure, can leap to great heights, as well as having a lighter body.

Merfolk: Lynn’s legs turn into a long and beautiful scaled tail that allows them to swim better and faster when in water. They also grow gills that allow them to breathe underwater. Lynn can only turn into this while in water.

Lamia/Naga: Lynn’s lower half is replaced with a long snake tail. Their eyes become reptilian, they grow fangs that can secrete a mild fast acting paralysis venom that last for twenty minutes. Their tongue also becomes long and forked like a snake and allows them to have an enhanced sense of smell. Scales also cover some parts of their body. Lynn becomes cold blooded.​
​
Passive Abilities:​
Child of Loki
Lynn is a child of Loki, The Trickster God. Lynn has a silver tongue like Loki and their words are easily believed because of this. Lynn’s lies are masked by magic and are almost always believable no matter how outrageous they seem. Because he is a child of Loki, Lynn is also immune to any Fae debts.
Lynn will also be marked as Divine to all Fae and Gods

Elf of Ebonyridge
Lynn can perfectly understand bugs and animals as they can understand them. They can talk to animals and bugs. Since Lynn is half Fae and Half Demigod, he actually ages differently than a regular human. It has been confirmed that he his body possibly ages twenty times slower than humans and will likely appear to be young for a very long time. So twenty human years is one year for him.

Iron
Since Lynn is half fae, he is highly allergic to iron. It isn’t as bad as what full blooded fae would experience but it is still bad. Lynn will rash up and begin to itch if he comes into physical contact with iron. He will also sneeze and get sick if he is around (or surrounded) by a lot of iron. Being trapped in a iron cage would give him Flu like symptoms.
​
Common Magical Items:
​
Human Shape Charm
While wearing this charm, the character appears human. They lose access to any abilities they had as a result of any non-human physical characteristics of their original body. For example, a character who uses wings to fly will be unable to fly while using a human shape charm. Characters wearing this charm always have a single set human form, which resembles their non-human form.

Aura Warning Bracelet: While not actually magical, Manta Carlos distributes customized bracelets for those with auras. Depending on the shape and color, people can tell at a glance the approximate range and nature of the aura of the wearer.

Lynn works at Morning Glory as a Musician​
HISTORY​
Lynn was born in Underhill but was immediately taken away by his father Loki. Loki had is own little reasoning for why he did this though he wasn’t keen on sharing why to anyone.
So Lynn lived and grew up in Asgard all thanks to his dad.

Lynn wasn’t treated as royalty. In fact he was treated like most of the demigods that resided in Asgard. He was important but not entirely important enough.

Asgard became...boring after many many years of just being there. So Lynn asked his father if he could visit the realm known as Midgard. Loki agreed and just enrolled him into Starlight Academy.​

Physical Quirks: Always carries their flute! And sometimes has butterflies following around them….

Reputation: Lynn is most known for their musically talent around the school.

Misc Information: Can speak old norse and other nordic languages.

Lynn can turn into a dragon.

Lynn can talk to animals now.

Lynn got a revamp.