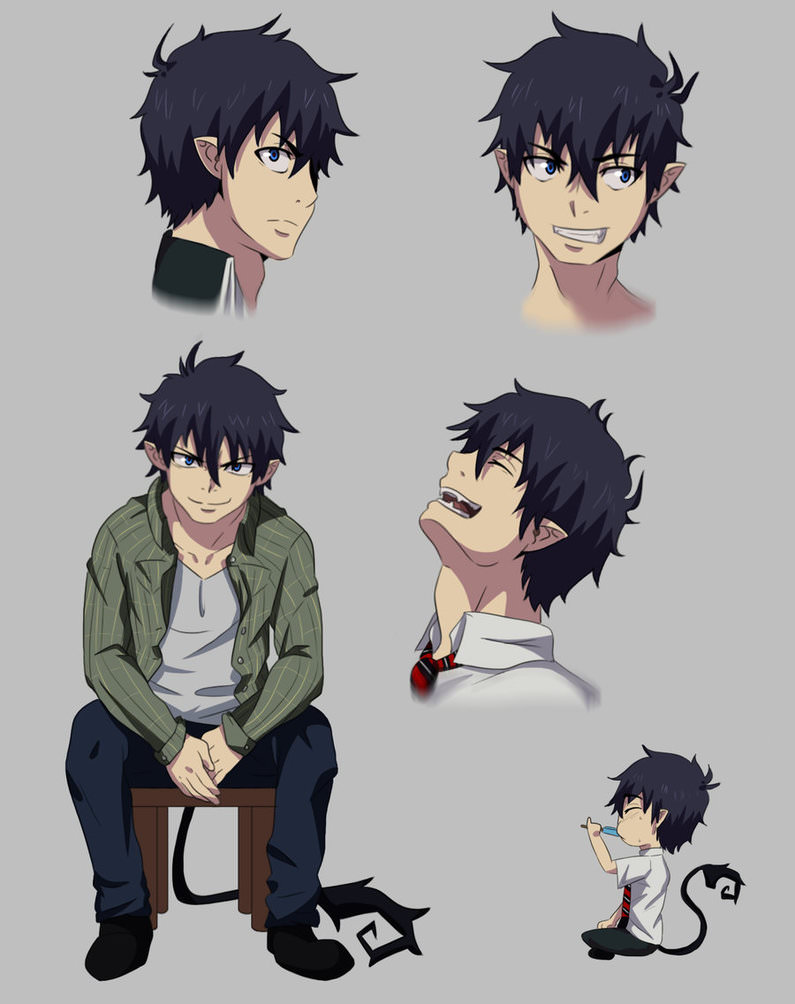 Image is Okumura Rin from Blue Exorcist, art by Crescenti-C 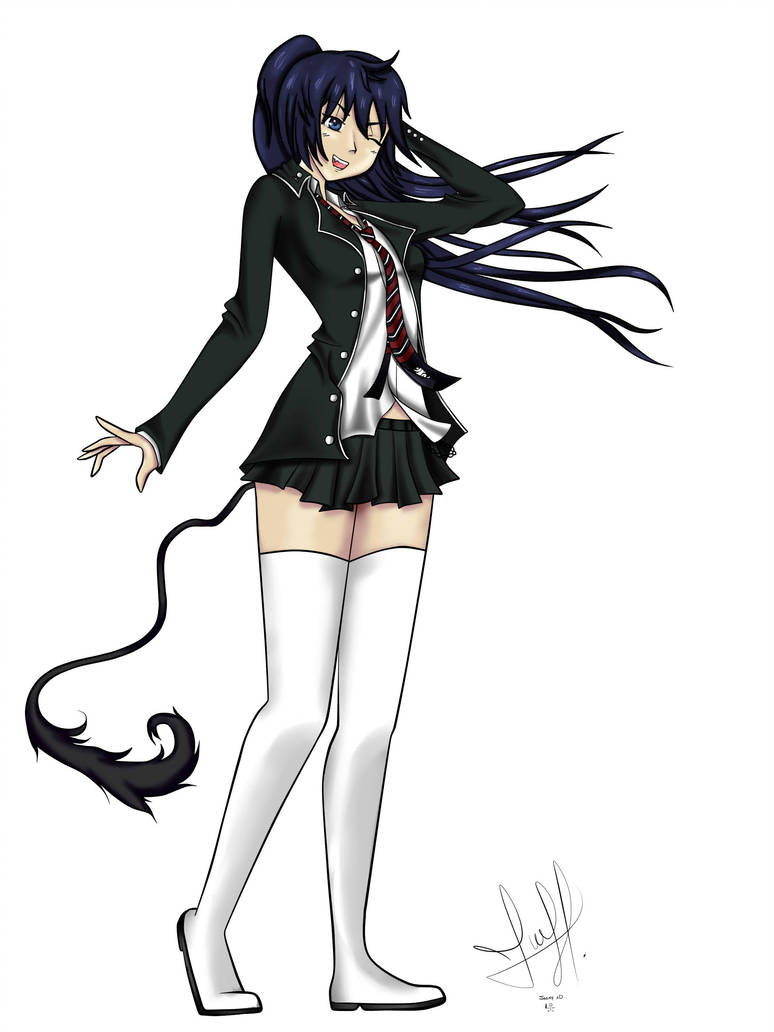 Lucan is overall a social and friendly person, they spent their first year on MC keeping a low profile, but they've begun being social again as it's something they've very much missed. They're the kind of person who will always greet you with a smile and a friendly hello. They has a good sense of loyalty once you've earned it, as they have a few trust issues brought on by their past, being used to being on their own they're quite self sufficient, they have their routines with their dorm kept neat and clean with little school involvement needed to ensure he does well on his own. He has a bit of a mischievous side, something leftover from their younger days, they enjoy teasing any friends they have and occasionally take part in pranks. People might be surprised to learn that they're catholic albeit a troubled one, the revelation that he's a half demon has overall troubled them in numerous ways including its affect on his faith, leaving him to question a lot of things about themselves and what they believe, that said, they're continuing on, holding onto his faith the best he can, with him viewing other demons with a combination of suspicion and curiosity.

Active:
•Teleportation: He can teleport to any location up to a mile away as long as they've been to the location before, can see it, or have a good picture of it to look at.

•Teleport Bolts: He's able to fire bolts of telporting energy, upon striking an object/person they'll/it'll be teleported up to half a mile away, if he's been to a location within that distance he can send it/them there or to a location he can physically see, otherwise it's random.

•Time Travel: He's able to instantly travel to any time period on Earth, as well as any location in that time period, with any futures he visits only be potential futures, with them not assured to happen, however he cannot visit events dealing with his life. He is unable to change the past, any alterations he causes will be undone upon his return. He can pull animals from the time periods he visitis, however this doesn't change the timeline and he's completely unable to return them. He's also able to take items, though these items must be minor, they cannot hold significant historical value and cannot be money gems or jewelry, magical items also cannot be taken. They must be able to easily carry the item, size wise it needs to be able to fit into an average backpack. He can do a time trip once every five days, to the past/future and back again. While in the other time period he still ages and can still be harmed, if killed him and anything on him will vanish to ensure their presence doesn't alter anything. He can only stay in the time period twenty-four hours before automatically returning to the present. He is able to bring one other person with him on his trip, said person has all the same limits as him. The person he takes with him must stay within one hundred feet of him or they automatically return to the present, and always returns when he does.

•Time Stop: He's able to halt time for five minutes, he's able to do this four times a day, with thirty minutes between each one. While time is frozen he is limited to the immediate 5 foot area around him, he's also unable to directly harm or move anyone, however he can move inanimate objects around.

•Water Scrying: He's able to look into the future through any water. He can do this in one of two ways, one; he can touch the water and be given a vision, or two; he can touch the water and the vision appears on its surface allowing others to watch. These visions are potential events and aren't necessarily ensured to happen, the visions' lengths are largely unpredictable, when he's seeing the vision in his head only a few minutes will pass but if he shows someone the vision said vision can actually be up to thirty minutes long. What the vision shows depending on what he attempts to see and how far into the future he tries to look, he can also go in random and get a random potential future event.

Passive:
•Enhanced Physicality: He's very fast, agile and flexible, can jump 20 feet, with his body overall being similar to that of a world class gymnast, fast, agile and flexible, with him being able to lift an average sized person with ease.
•Demonic Features: He has demonic features that he can make vanish and appear as needed, this includes a tail that can lift his weight plus one other person, pointed ears, as well as claws and fangs.
•Immortality: He'll stop aging in his twenties and live forever if not killed and is immune to most diseases even being unable to be carrier, he'll also survive exposure to any non magical poisons/toxins without long term damage.
•Music Mastery: He's able to play any instrument and any song perfectly without training. The moment he touches an instrument he'll be able to use use it masterfully and he only needs to hear a song once to know how to play it. His voice always sounds beautiful when he sings to whoever is listening, he's like an incredibly talented singer. His voice is also able to adapt to any type of music he's singing to.

Common Magical Items:
•Sex Swap Charm: While wearing this charm, the characters sex is swapped. They still look like themselves, and have a consistent other form that they'll take when wearing the charm. As a safety precaution, this charm also works as birth control for the one wearing it.

Lucan lives with his guardian in a house, he supports him, and he gets money from a part time job.

•There was a woman named Maria, she was a prostitute, a lady of the night, someone who brought pleasure in exchange for cash. She met Mephisto while he was wandering England in human form one day, he purchased her services several times over the course of a month and grew fond of her.

•So the demon stuck around for a while, of course he had many lovers, while Maria was ignorant of his demonic nature at first she didn't expect monogamy from a client, it was work and nothing else.

•Eventually Mephisto revealed who and what he was to Maria, offering her a place as one of his many ongoing lovers in exchange for immortality, she was tempted but turned it down, despite her current occupation she still had certain beliefs regarding deals with demons. While disappointed an immortal demon saw no point in trying to convince her, they're were other lovers for him, it was easy for him to move on, so he did just that.

•Then Maria discovered something unexpected, she was pregnant, needless to say the idea of having a half demon child scared her. Eventually she gave birth to her child, and named them Lucan.

•Despite her worries, Maria loved her child, she did her best to raise them, save money for them so they could have a better life. Unfortunately Lucin only had their mother for five years, she died of a sickness.

•Lucan was taken in by an orphanage run by nuns and priests, so he grew up there. They had troubles as any child would, needless to say being the orphaned child of a prostitute made people view him a bit differently, caused them trouble.

•At age thirteen things changed, hid inhuman abilities emerged while outside one day, and obviously the nuns and priests didn't react well. In the end Lucan went on the run, living on the streets for the next few years, stealing to survive.

•Then one day he tried to pickpockets wealthy looking man, to his surprise the man was his father. The demon looked his son over with minor interest but made it clear that he had no intention of raising him or taking any fatherly responsibility of any kind. So the two went their separate ways.

•While Mephisto mostly kept to what he said, he did tip the MC government off on Lucan's existence and location, allowing scouts to locate him and bring him to the school.

•They've been on the island for a while now, they've kept a mostly low profile, hiding their demon nature at first, though they're slowly become more public about it.

•Plays the harmonica.
•Has a locket with a picture of their mother, as well as a crucifix she once owned.
•Has picked up various pick-pocketing and slight of hand tricks while on the streets.
Last edited: Mar 5, 2019 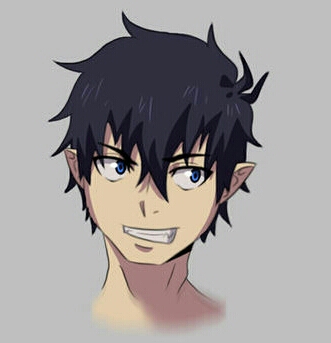 Abilities Summary: Enhanced agility and strength is slightly enhanced. Can teleport and can teleport other things via "teleportation bolts. Can make his demonic, tail, fangs and claws vanish when he wants. Has inherent musical mastery. Can time stop. Can scry through water. Can time travel.

Reputation: Has been on the island for about six months, kept a low profile, a few small rumors say he's keeping his true species a secret.

Misc Information: Always carries a small locket with him, usually in his pocket.
Last edited: Mar 5, 2019

Lucan is a music master.

Lucan can scry through puddles. And water, you know.

Deleted the common magical item section and moved the charm to active abilities
Click to expand...