Hello! Now that I've returned with a cast of two, I'd like to start up some threads. I'm not completely sure what I'm looking for, but I have some ideas. There are no limits to any role.

Sela: Sela has only been on the island for 3 months. They're a... weird creature. They're an unknown species and have powers mainly revolving around dreams and imagination. Their personality is a little inconsistent, but overall they're naive, curious, and child-like. With an inconsistent personality comes an inconsistent form for a shape-shifter. Sometimes they're an adult, child, or animal. They change based on the environment they're in and the people they're speaking to.
Konpeitō Hatsu: My most well-established character out of the two. He is an arena commentator for Acinaces Arena, a body donor, a regular on Bleedr, and the leader of The Welcome and Organization Society, and boyfriend to Vladimir Wolfstein. Suffice to say, he's a busy man. 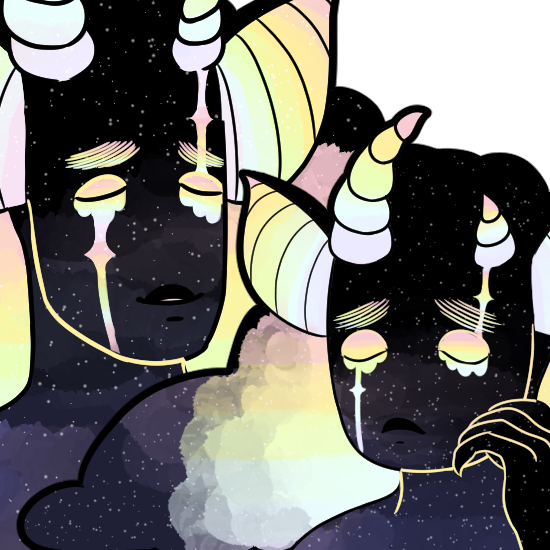 Serena and Soosei could be super friendly to Kon...
Neon's son, Symlink, could interest him too...

@GrimRPer I'd like to give Sela more attention since they're not as developed. Got any ideas on what characters specifically would fit well with them? We can take things to Discord too if you'd like.
Konpeitō Hatsu

My child Delaney would love to meet Sela! Delaney would especially love to hear how Sela would describe themself to her and hear more bout them in general. They're both dorm kids so meeting up there would be simple.

@Fox Tarts That sounds lovely! They could meet each other in the student lounge. Sela would certainly take notice of her style... or... well... really her dog, but her style too!
Konpeitō Hatsu

Delaney loves her dog, and likes people who know her dog is the bomb lol. The student lounge sounds perfect! Delaney is new to the school and she could be familiarizing herself with the lounge, which would give Sela the perfect chance to interact c:

@Fox Tarts Oops, I didn't get a notification. I can start up a thread then!
Konpeitō Hatsu

@GrimRPer That sounds good! Since Symlink is in elementary school, it could be that Sela has seen him around a few times? Maybe interacted with him on the playground? Or we could start with them meeting on the playground. I'm up for other ideas too.
Konpeitō Hatsu

He would probably be kind of new on the playground, Neon keeps a good eye on Symlink most of the time and takes him to a variety of places.
Basté "Bastet" Rose Bywan - Cold-Blooded, Warm-Hearted Huntress
Neon Moth "Neon" - Fox Yokai From A Digital Urban Legend
Ília Seirín, "Serena" - Phoenix Of The Gentlest Sunrays
Sumi no Ookami "Kuro" - Creative Living Ink Yokai Boy
Symlink - The Living Program
Soosei "Gemini", Hakushoku - Luck-Bringer Youkai Deity
You must log in or register to reply here.
Share:
Link