APPEARANCE​
Kalik is a short man that stands at 5’6”. He has long shimmering light blue hair, dark blue skin with little specks of white scattered around, white eye markings and body markings, and purple horns.

Kalik ears are pointed at the ends and he has darkened scleras with yellow eyes.

Kalik doesn’t wear any clothes that would them too baggy or thick. In fact he wears as little clothes as possible when he can. He still dresses reasonable well in public, just very thin and flimsy like clothing.

While wearing his human shape charm, Kalik appears to be a normal dark skinned man with short black slicked back hair. He looks like Jafar + Kofi
​ 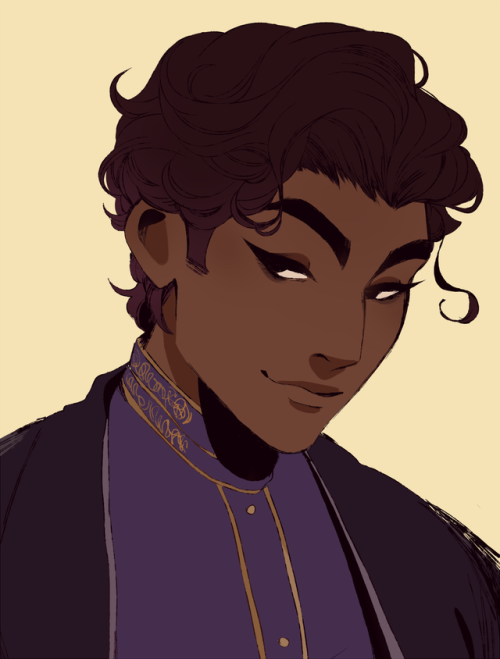 PERSONALITY​
Kalik is a very peculiar individual. He is to say, a very sly and tactical thinking person who likes to just stay ahead of the game of life and not fall to far behind and get fucked over again.

Kalik can be playful when he wants to be, he does like having people’s attention but at the same time considers it bad if he has too much attention on him. Too much attention and he won’t be able to get away with certain things here and there.​

Lasso of Light
Kalik is able to create a lasso of pure light that is 5ft long, the lasso is just solidified pure light. When the Lasso is successfully around a person they will be drained off all their strength and will not be able to use any active powers they have.


Soul Link
Kalik is able to link his soul with another person’s which allows him to experience the other person’s emotions, thoughts, memories, and even pain. And vice versa, whoever Kalik is linked to will experience his emotions, memories, thoughts, and pain. While Link Kalik is able to communicate telepathically to the person he is linked to and can also visit them in their dreams.
Can only link to one person at a time.
Linking requires intimate physical contact.

The link itself takes on a physical form of a matching tattoos that forms on both Kalik and the other linked person. It is the main indicator that the two are linked.


The Perfect Match
Kalik’s body and personality are extremely influenced by the people he has linked with. His entire body from genetic make up, skin complexion, sex, and even his species will adjust itself to closely align with the person he is linked to. The changes start out small and simple but become more drastic and major the longer and the stronger the link is.
​
Passive Abilities:​
Enhanced Body
Kalik’s body is stronger, faster, and more durable than any normal human. He is strong enough to lift 300 pounds with ease, runs twice as fast as a normal human, and has enhanced endurance and stamina. Kalik’s body can also receive a great deal of blunt force trauma before taking any severe or noticeable injuries.
Kalik’s body is also immune to extreme temperatures, he doesn’t get cold or too hot.
He can also survive floating in space up until he needs food or water.


Body of Magic
Kalik’s body houses a lot of magic, so much magic that it seems to just leak out of him. The magic is just there and is easily detectable. While it doesn’t really do anything for Kalik, everyone around Kalik in a 20ft radius will have their powers be doubled in strength.


​
Weaknesses:​
Corrupted Soul
To anyone that can sense it, Kalik’s soul is corrupted, tarnished, black. It doesn’t seem fixable even in the slightest. Something is just off.

​
Common Magical Items​
Aura Warning Bracelet
Kalik wears a aura warning bracelet to alert others that he has a power enhancing aura with a 20 ft radius.

Human Shape Charm: While wearing this charm, the character appears human. They lose access to any abilities they had as a result of any non-human physical characteristics of their original body. For example, a character who uses wings to fly will be unable to fly while using a human shape charm. Characters wearing this charm always have a single set human form, which resembles their non-human form.
​
Resources:​
Owner of Club Empyria and former bounty hunter. Also owns a very fancy spaceship docked on the spacestation

HISTORY​
Kalik’s life up until this point has been a sad tale from being a child stripped of most of his rights and almost being executed from multiple attempts of trying to break away, to being a loyal servant to a Goddess who so happened to spare his life on a simple whim.

To be honest, life was never really life. Everytime he tried to take control of his life things happened to just simply take it away. In fact he was literally taken away and was tortured, drugged, and raped for two months. He was saved again by the Goddess once more but he still wasn’t fully saved.

Anger and emotions on high, he just left. He wanted to take his life back and he went to chase down the one person who caused the most recent problems.

There was a lot of hiccups and problems and a lot of things he had to do to get what he wanted….what did he want?
Kalik eventually did get something after giving up a lot but even after he still felt empty.
Kalik then remembered he still had someone there was still one more person left who needed to be punished. 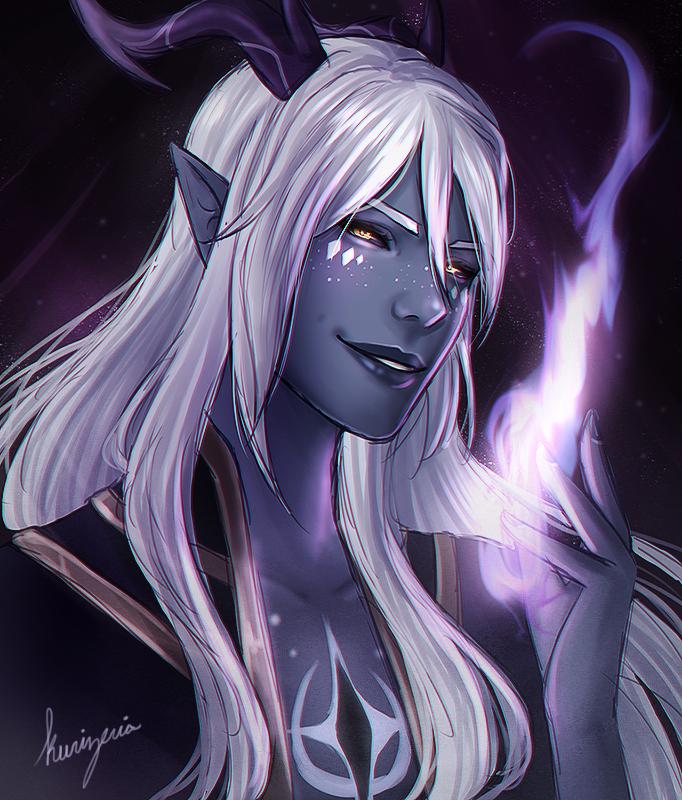 Physical Quirks:
His hair shimmers in the light

Power Summary:
Can create a magic lasso that drains strength and negates powers
Can link his soul with people
He becomes like the person who soul he is linked too
Enhanced strength, speed, stamina, durability and immune to extreme tempatures.
Power boosting aura
Optional human shape charm.

Reputation: All space have heard of the spoopy tales of Bounty Hunter Kalik someway or another.

I did some revisions, clarifications, and updates on Kalik's abilities.