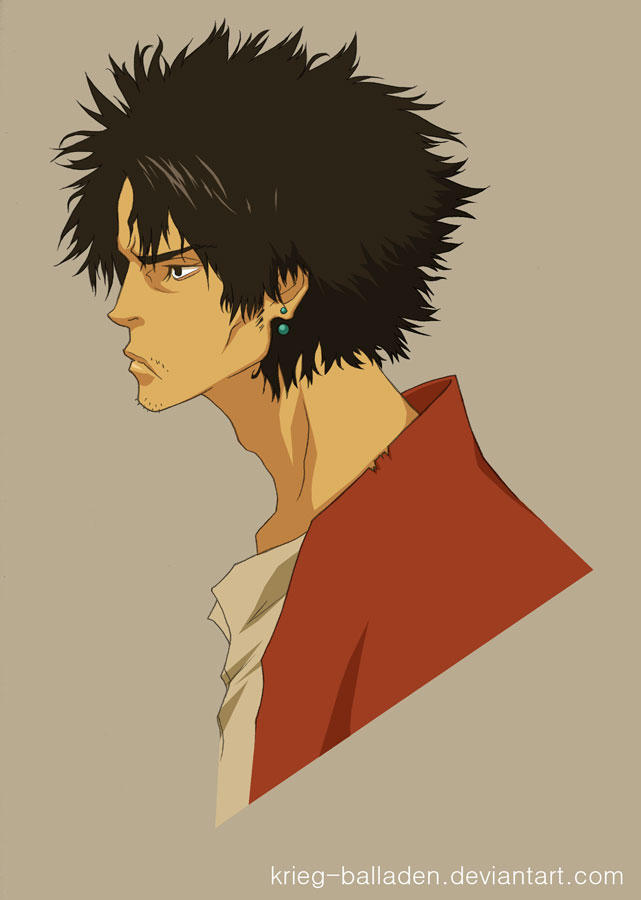 Image is Mugen from Samurai Champloo by Krieg-Balladen


He's a handsome young man of middle eastern decent, standing at 5'7, with black slightly messy black hair, dark eyes and tanned skin. His clothing is usually very casual with jeans and t-shirts, along with his favorite red jacket and a pair of boots, with both of his ears pierced, he has "fear nothing" tattooed on his back in Arabic.

Kadir doesn't come as particularly pleasant upon initially meeting him, he's honestly a bit of a grumpy ass and is very blunt, he tells people the truth even if it hurts and is generally willing to speak his mind even if knows someone won't like what he says. All things considered you'd expect him to have a short fuse, but he's actually more patient that what most would realize, it takes a lot to get him angry, said anger is usually calm and cold though if pushed to the edge he can in fact snap though it's very rare. He can be pretty cynical, life was hard for him and it's left it's mark, he doesn't expect much from people in general, yet surprisingly he does expect a lot from himself, he likes helping people though that can be hard to believe all things considered and so can be quite surprising, and he's not the brute some might mistake him to be, he's intelligent and enjoys reading and learning most subjects though he isn't used to attending any type of school. When it comes to religion he has a somewhat neutral and uninterested view on it all, his mother was a devoted Muslim, but he himself sees little point in following any god as such ideas of faith have always failed him, it's just something he no longer views as a part of his life. Overall he's a rather odd individual, initial meetings tend to vary from neutral to unpleasant depending on circumstances, but if one was to put in the time they'd find a complex individual.

Active:
•Element Manipulation: He's able to manipulate the elements, currently he's able to manipulate lightning.
-Lightning: He's able to conjure and manipulate electrocuting lightning, it needs to stay within seeing distance for him to maintain control though he doesn't have to be actually looking at it.
•Enchanted Sword: A sword, it's metal is as strong as the finest steel, any damage it sustains self-repairs in twenty-four hours, but restoration from complete destruction would take a weeks.
•Mist Form: He's able to shift into a cloud of mist, this cloud is as big as his normal body, while in this form he's able to fly. While in this form he's able to push through any small gaps, such as under doors or cracked windows, however he cannot use this form to enter private homes.

Passive:
•Elemental Immunity: He's immune to any element he can create.
•Enhanced Physicality: He can lift a ton and he's also bit more durable than the average human with physical blows needing above human strength to cause any real harm with decently sharp blades being able to pierce him and firearms being able to harm him about as easily as it would a full human, he'll stop aging in his twenties allowing him to live forever unless killed.
•Language Learning: He instantly learns to speak/read/write a new language upon seeing a person who speaks it, and he always remembers the languages he learns.
•Environmental Awareness: He has a sort of sixth sense, meaning he always knows what's happening around him in a ten foot radius.

•Kadir currently resides in the dorms living off a school scholarship.

•Kadir was conceived during a fling between his mother and mid level power jinn. The jinn having seduced her and for one evening take her to his hidden home in the desert, returning her to her city in Egypt upon the relation's end.
•Soon then woman found that she was pregnant with the jinn's child. With her parents long passed and no other family to aide her she attempted to find the jinn to no success. So she gave birth to Kadir, facing scrutiny from some of the people around her for having an illegitimate child, but she'd try to raise him none the less.
•The child of a single parent, growing up wasn't easy for Kadir, even as time past people looked down on him and his mother, they were complete social pariahs. This became more and more of an issue as he grew older, with the adults' views starting to bleed into their children, Kadir faced bullies on a daily basis.
•Growing up in these conditions had a great affect on Kadir, entering teenage years he developed anger issues and slowly developed a layer of bitterness in his personality. Unfortunately his hardships would only get worse.
•At age fourteen he came to his mom dead, a man standing over her, she'd been attempting to pay their bills via prostitution and it'd gone horrible wrong. The man panicked and tried to kill Kadir, pinning him and attempting to strangle him. At that moment Kadir's jinn side emerged, he shifted into his mist form and fled, hiding in an abandoned building.
•The man who'd killed his mother set their house on fire, and started to spread rumors that she'd been a witch, with Kadir being accused of being the same. Given his newly discovered abilities Kadir wondered if it was true. With no where else to go, he shifted into mist and fled his city.
•He'd spend the next year wandering town to town, village to village, stealing to survive, never staying in one place for to long out of fear of what happened. Then one day he was walking through the market of one of the towns when a man approached him. This mysterious man claimed to be a traveling merchant of sorts, and to Kadir's surprise, he gave him a gift, a surprising gift, a locket with a picture of his mother and told him to go home.
•Intrigued by what the man had said, he returned to his home city, what he found was disturbing, the man who'd killed his mother had gone unpunished
•Kadir was disgusted and decided to take matters into his own hands. In the dark of the night, using his mist form to get close, he killed the man to ensure he never hurt anyone else again.
•After that he'd return to wandering, he kept to himself for most of it, but did find himself drawn into human contact at times. He'd occasionally find some corrupt person, usually a criminal that he put down, and occasionally enjoyed the company of someone but he largely kept to himself.
•Eventually he'd settle in a little village for a few months, living in an empty shack and helping an old man run a shop, until a scout found him. He told Kadir of the island, a place of second chances and new beginnings, a place where he could start over. Kadir was skeptical, but intrigued, so he agreed to accompany the scout to the island and enroll in the academy.

•Kadir currently speaks Arabic and English as his main two languages but knows several others.
•Kadir's father is a trickster jinn who wanders among humans, he actually keeps an eye on Kadir but has only directly spoken him once and never identified himself.
Last edited: Feb 22, 2019

Notable Features: Clothing is simple, wears tough leather books, has an Arabic word tattooed on his back.

Abilities Summary: Lightning conjuring and control, enhanced strength, can turn into mist, has an enchanted sword.

Reputation: None, he's quite new

Misc Information: Icon is fanart of Mugen from Samurai Champloo by Krieg-Balladen
Last edited: Feb 22, 2019
You must log in or register to reply here.
Share:
Link