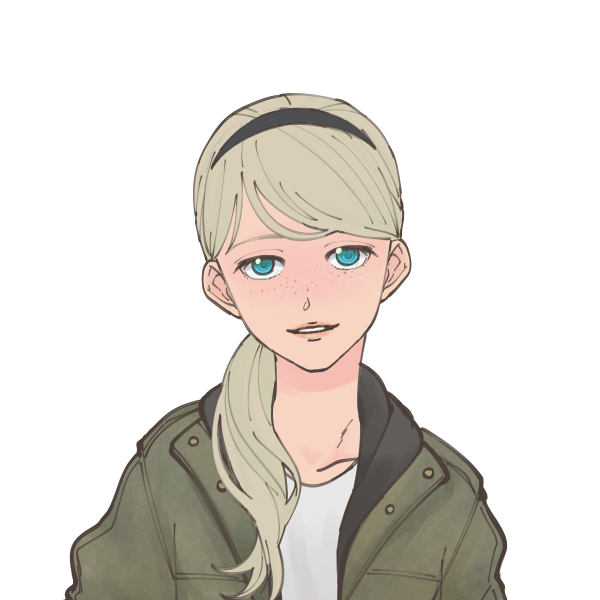 Image Reference made using this maker by 真ん中のゆちんこちん on Twitter.

She almost always has a camping backpack on her with all sorts of tools and camping gear in it. She is also rarely seen without her voice recorder, which she is constantly dictate notes and ideas to, or her journal that she catalogs the supernatural stuff she’s encountered in.
personality
Jazz is, in both a figurative and literal sense, the Boy Scout of her friend group. Or Eagle Scout, as she is fond of reminding people. The only female Eagle Scout to come out of Raven’s Grove ever, she is more than proud to add. So yeah, she’s smart and driven and maybe just a little prideful. She’s spent her whole childhood knowing that she was gunning for first female president. She was gonna make Daddy proud.

Then she got tangled up in all this supernatural stuff. And a group of misfits and weirdos she wouldn’t have really noticed otherwise became some of her best friends. And it’s given Jazz a whole new outlook on life. She loves the supernatural, you might even call her a fangirl. She has an intense fascination with supernatural creatures that she assures everyone is ninety-six percent scientific curiosity. She won’t say what the other four percent is.

She suffers a bit from Imposter Syndrome, the result of years of pressure to constantly exceed expectations. Understandably, she keeps this close to her chest because it's hard enough feeling this way. She doesn't think she could handle letting others know how much of a fraud she thinks she is. But at the end of the day, Jazz is a leader. She’s grounded and seemingly fearless and decisive when it counts.
abilities
Active

Passive
Fortuna Eruditis Favet or; “I told you we’d need this!”
Jasmine is lucky. Like really lucky. But this luck isn’t general or broad: it manifests in very specific ways. Outside of mundane routine (i.e. regular teenager stuff), anything that Jasmine carries on her person will be necessary. If she brings a flashlight on an adventure, that guarantees that she will end up in the dark at some point before the danger/action is over. Likewise, if she doesn't bring a flashlight darkness will never be an issue. Jazz is unaware that she has this ability.

Beginner’s Luck or; “I swear I've never done this before.”
Jasmine is lucky. Like really lucky. But this luck isn’t general or broad: it manifests in very specific ways. When she uses a skill that she has never tried before, her success at this first attempt is almost guaranteed. Any given skill only gets this benefit once. After that, she has to learn the skill normally just as anyone else would. Jazz is unaware that she has this ability.

Protection or; “That was a close one, huh guys?”
Jasmine is lucky. Like really lucky. But this luck isn’t general or broad: it manifests in very specific ways. Jazz has been in too many close calls to count, but she’s always made it out alive (if not unharmed). Wounds that she would suffer seem to bend or curve slightly away from her. Fatal wounds become critical, critical wounds become severe, etc. If a dangerous situation would merely graze Jazz, it misses her by inches instead. Jazz is unaware that she has this ability.

”It’s All Skill, Baby.”
Jazz's luck, as much as it seems so, isn't really supernatural. It's preternatural, on the edge of being beyond human but not quite. As such her luck abilities cannot be read, stolen, copied, or tampered with using abilities that do so.

”The Void Stared Back.”
Jasmine's trip through the portal that landed her on this version of Earth gave her a glimpse into what she can only describe as the infinite. The result of this glimpse is that her mind cannot be read or altered by abilities they do so. Likewise she cannot be harmed by the “unknowable” such as Eldritch creatures, the true forms of Angels, or seeing the Cycle.


biography
It's really hard being the Sheriff's kid. Like really hard. It's even harder being the only girl in your Boy Scout Troop, especially when you have more merit badges than the boys. It's hard being a straight A student, ahead of your peers in just about every subject. There's a lot of pressure from adults on all sides and your peers seem to hate you for just doing your best. Some days you just want to curl up and stop trying. But that's worse, because part of you knows that all the praise and attention you get is only because of how well you do.

That was Jasmine Kennedy's life up to the point she became an Eagle Scout at the age of thirteen. Her only anchor during that time was her father, who amazingly showed her all the support she needed despite also being the sheriff of Raven's Grove.

Things turned around for her when the weird, supernatural stuff came crashing into her life. Suddenly she felt like everything she was doing had an immediate, tangible purpose. She had a group of people she felt like she could genuinely call her friends. Dad didn't like her going out late at night, but she had always been responsible before so she found that she could sway him most of the time.

She had a lot of adventures with her friends, growing close to them and actually enjoying her life for once. But things got dangerous. June, a dear friend, sacrificed herself to save them all. And even after that there was more to deal with. Zombies, of all things. Or something like them. They needed to save June and stop this madness once and for all.

Only the portal thing didn't go so well. The gang got separated and Jazz ended up somewhere in West Virginia. Only, not her world's West Virginia. An alternate universe West Virginia, one that made little sense to her. It didn't take long for the "crazy homeless conspiracy theorist girl's" wildly accurate descriptions of supernatural phenomenon to get the Scouts to go have a look-see. She was brought to Manta Carlos where she hopes to reunite with her friends and plan their next move.

Jazz has had a lot of nothing happen to her since she got to Manta Carlos. She reunited with the other Enigmas and confessed her feelings to Eric (he likes her back and thy're dating now). But she also had a falling out with Risky that ended in a big talk that left Jasmine feeling pretty low about herself.
Resources
She lives on campus and does the stipend thing.
additional info
Last edited: Aug 15, 2019
Primary and Supporting Characters || Named NPCS

Abilities Summary: Almost guaranteed success on her first try with a skill. Objects she brings on adventures will be needed. Objects she doesn't bring won't be. Wounds she suffers are less severe. The above powers cannot be detected, stolen, copied, or modified. Immune to mind affecting powers and can "know the unknowable" without ill effects.

Reputation: New girl. Member of the Enigmas, for those who know about them.

Misc Information: GRAPPLING HOOK!
Art is from this maker by 真ん中のゆちんこちん on Twitter.