Jackal's appearance is clearly demonic in nature, with red eyes, sharp teeth, and a massive black tail. Standing seven feet tall, with tanned skin and dark blue hair that he pulls into a ponytail that falls to his lower back, Jackal is an imposing figure, heavily muscular with broad shoulders.

His tail is eight feet long, made of hard black keratin plates with red flesh barely visible between teh plates. His tail has four sets of insectoid legs near the base, each of which ends in a sharp point. The underside of his tail is concave closer to his body, allowing it to test closer to his body.
PERSONALITY
Despite Jackal's appearance and his reputation as a big of a jerk, he's a surprisingly nice person once you get down on it. He's mellowed in his time on the island, gained a new perspective, and tends to roll with the punches no matter how weird things are.

He still tends to be quick to judge on moral issues, with a very strong sense of right and wrong.

Despite his scary appearance, Jackal is very popular with children, no doubt because he'll put up with almost anything. He's fine with children climbing all over him, and has no issues talking with them all the time. He has a good sense of boundaries, and among kids he likes he even makes an attempt to moderate his language. Oddly enough, he seems nervous around babies and toddlers.
PASSIVE ABILITIES
Immortal: If Jackal dies, he'll recover fully after about a week in hell and be returned to earth.

Physical Attributes: Jackal's senses and physical capabilities are just over peak human. He's slightly faster then an Olympic athlete, and slightly stronger than a trained weightlifter.

Tail: Jackal possesses a large eight foot long tail. The tail has thick plates of black keratin as armor, and as a result has reduced sensation compared to the rest of the body. He can't feel light touches, but if someone were to hit it he'd be able to feel that.

Near the base of Jackal's tail are four pairs of double jointed insectoid legs, each ending in a sharp point. Those closer to the base of the tail are larger, about as thick as his forearm, while the set farthest away is only as wide as his wrist at the largest.

Jackal's tail is well muscled, and could easily hold Jackal's entire weight if it wasn't so oddly placed. Each of the legs is about as strong as Jackal's arm, but obviously less dexterous due to a lack of hands.

The underside of Jackal's tail close to his body is concave, providing a dent that lets his tail rest closer to his body. In aquatic or aerial combat, where legs are useless, Jackal could rest his legs in the dent, using his tail's legs to hold them there and letting him use his tail for movement in their place.

Much like a lizard, Jackal can tighten the muscles in his tail, causing the tail itself to widen and flare out. This makes it a bit better for swimming, but it's nothing close to a mermaid's tail.

Omnilingual: Jackal can speak any earthly language, and understands them when he hears them.

Adaptation: When confronted with a non-combat physical situation that he can't manage, his body will adapt over the course of a minute to be able to handle it. If the room he's in is on fire, he'll adapt to be fireproof. If he struggles to lift something, after a minute he'll be able to. Five minutes after it stops being relevant, the effect fades and he returns to normal.

Sense Murderer: Jackal has an extra sense which allows him to identity whether or not someone is a murderer. This is a primarily visual sense, displaying as a white or black tinted aura. For murderers, the aura's size changes based on the number of murders committed. In situations where Jackal can't see, he can still tell roughly where people are, and their innocent or guilt, but won't have any idea of the scale he's dealing with.


Jackal's sense only counts true murders. Accidental murders do not count, nor do cases of true self defense (or defense of others) where there was no other option but killing the assailant. In the case of ordered murder, the guilt falls on both the killer and the person who ordered the killing. Murders committed outside of the killers control (possessed, berserk, etc) generally do not count, assuming that they could not have reasonably prevented it.

In the event of reincarnation, memories are what counts. Someone who does not remember their past lives would not have the murders count against them, while someone with partial memories would.

Jackal can only read the auras of sapient life, and only the murder of sapient life counts. Whether or not someone is alive or undead does not count, but when it comes to immortals, it's what happens after they die that counts. Killing someone who regenerates does not count as murder, while killing someone (like him) who respawns in the afterlife would count as murder.
Punish the Wicked: Jackal is nearly omnipotent against murderers. His abilities adapt with the intention of overcoming the abilities of the guilty, allowing Jackal to more effectively torment them. Mental invasions, auras, and similar effects by the guilty do not work on Jackal, leaving him oblivious to any such attempts.

Any point that Jackal is in combat with someone (whether an attack has started, he's been surprise attacked, or he's just about to attack someone), he will develop new abilities in order to defeat them. The scale of his abilities will change depending on how guilty they are. Against someone who has killed only a single person, Jackal will have to put effort into winning, and it will be a struggle, if a lopsided one. Against someone who has killed millions or even billions, Jackal will be an all-powerful god, capable of doing almost anything so long as it torments his target. While Jackal has no actual control over what abilities he develops, he does have a clear understanding of how they work. His abilities tend to develop in a way to humiliate his opponents. Against someone with fire powers, he wouldn't likely get water powers--instead he'd get even stronger fire powers, allowing him to beat them at their own game.

Jackal loses all advantages he gains thirty seconds after he stops fighting his opponent, stopping any effects he might have put into place. When fighting multiple opponents, the powers only remain as long as he is focused on that single person.

Jackal cannot harm the innocent. He will never gain an ability that would cause collateral damage. In the event his opponent takes an innocent hostage, Jackal's abilities would adjust to accommodate for that, allowing him to fight without harming them.

ACTIVE ABILITIES
Redemption: Jackal is capable of absolving people of the sin of murder, with some restrictions. In order to be redeemed, the person must be repentant and have taken actions to absolve each sin they wish to clear. However, this redemption cannot be tricked. Even if Jackal believes they are being truthful, the redemption won't work if the one being redeemed is not truly repentant.

Saqr: A gold-and-silver sword with the motif of a falcon on the handle, attacks with Saqr are treated as if they are being inflicted by an enemies weakness. For demons, it might be a holy weapon. For werewolves, silver. When not being wielded, Saqr appears as a falcon tattoo on Jackal's forearm,allowing him to summon and desummon the sword at will.
WEAKNESSES
Punishment of the Innocent: As strong as Jackal is against the guilty, against the innocent he's powerless. The punch from an innocent person will send him flying. Abilities used against him will hurt far more. The moment an innocent person chooses to fight Jackal, he's already lost.

Intention matters, however. A playful smack on the back won't throw him around, but a sucker punch definitely will. Toddlers and babies tend to be extremely dangerous to Jackal, as they aren't trying to hold themselves back from hurting him.
BIOGRAPHY
Jackal was created at the dawn of time, a nameless zabaniyya whose duties made him a torturer in hell. That was his life, and he was perfectly happy with it, although lacking much of a sense of self. Over the course of years, he became more of what most people would consider a person.

His exact reasons for arriving on Manta Carlos are unclear, and Jackal keeps them close to his chest. He will claim he's there for a visit, but refuses to say any more. He's currently unemployed and is little more than a public nuisance.
RESOURCES
Jackal works at the House of Volkov as a bartender, but after two separate off-world expeditions on Malara's behalf, he's got plenty of savings. He shares a small apartment with Tengu.
EXTRA INFO
Jackal is a zabaniyya, which might be an angel or might be a demon, depending on your particular interpretation. Either way, he was originally a resident of hell, entrusted with the task of torturing murderers.

Jackal is primarily carnivorous, but can digest vegetables.

February's Gift: A beach towel that never gets sand stuck in it.

Art Credits: Jackal's original design is by me, based on Cu Alter from Fate/Grand Order. His main reference image is commissioned art by Cloverinblue, with a second piece by NanoColors. Banner and ICC Images by CircleJourney.
Last edited: Oct 25, 2019 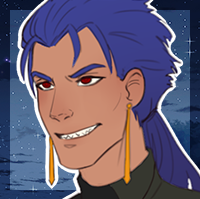 Physical Quirks: Omnilingual. Understands all earthly languages, and often gets confused when languages change. Frequently picks at teeth when bored.

Power Summary: Effectively a holy-aligned demon servant of God. Immortal. Physically above peak human. Extremely strong tail. Omnilingual. Adapts to physical situations after a minute. Can sense murderers. Wins every fight possible against murderers. Can redeem murderers. Has a tattoo that turns into a sword, which is treated as a characters weakness. Always loses in fights against the innocent.

Reputation: Best friends with Malara Tor and Thanniturge. Supposedly killed a god. Close with the Drakenhardt family. Works at the House of Volkov.

Misc Information: Omnilingual for all earthly languages. Has a religious pendant under his clothes.

Art Credits: Jackal's original design is by me, based on Cu Alter from Fate/Grand Order. His main reference image is commissioned art by Cloverinblue, with a second piece by NanoColors. Banner and ICC Images by CircleJourney.

Jackal's back to murdering murderers. Also he traded his spear in for a sword.
Primary and Supporting Characters || Named NPCS

Jackal's avatar has been updated, thread and relationship trackers have been added, and the format for everything has been changed.
Click to expand...

Jackal has new commissioned art by Pixel-Latte, and his art credits and reference images have been updated accordingly.
Click to expand...