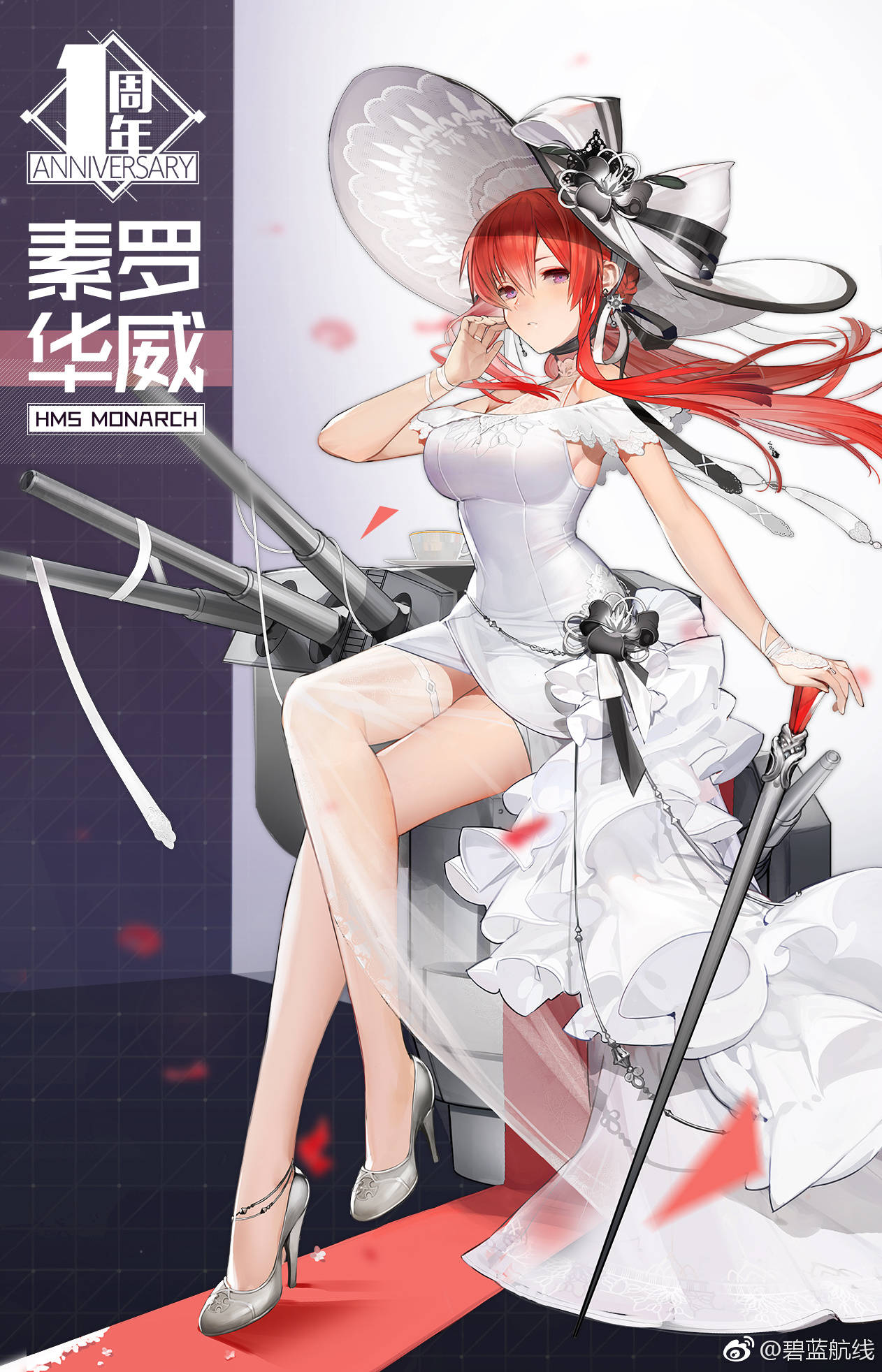 Here enters the intense-looking redhead, standing at 6'4" and likely sporting stiletto heels. Her red hair trails past her butt; her burning, red eyes sport a narrow shape. Ivanka's skin is pale and smooth. She's curvy but lacks visible muscle; this gives the false impression that she's not physically strong. Beyond the height, there isn't any real indicator that she lifts. Her body composition is mostly legs and lower body. As far as anyone can tell in her human form, she's normal. Her draconic features generally don't leak into her appearance.

Ivanka sports a fairly diverse wardrobe. She's learned of modern fashion and has adapted well. Her city attire leans on the dressier side with pretty dresses, high heels, and fancy hats. Her athletic attire brings in sports bras, leggings, and sweatpants. When mulling about in bars and clubs, she adopts a motorcycle street punk style complete with leather, denim, and high-heeled boots. Date nights introduce evening dresses, shimmery fabrics, and cute bolero jackets. 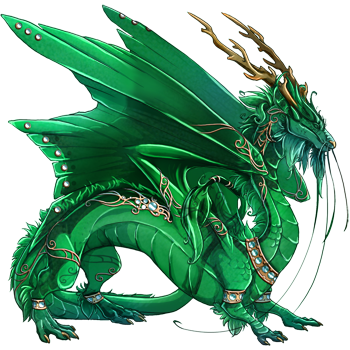 Playby: The Jeweled Talisman skin for the Imperial Dragons from Flight Rising.

Her dragon form is a giant beast with shiny, green-colored scales that leads to people mistaking her as being based off an emerald. She's about the size of a mansion and gains weight when her curse kicks in (Though not visibly). Golden antler-like horns stick out of her head and compliment the little touches of adornments on her body. She has large wings and can most certainly fly with them. ...in most scenarios at least. Overall, she gives off the appearance of a regal dragon despite being clanless.

Personality Description: Ivanka was once a raging beast of a princess; she is considerably more relaxed now. Cold, blunt, but not unfriendly. Her icy glares and sarcastic quips can turn people off. She also has a dark sense of humor, occasionally using bits of her past transgressions as sources for jokes. She recognizes what she's done is wrong but refuses to dwell in regret. She prefers to keep people at arm's length and gets uncomfortable with touchiness. The dragon possesses a certain social awareness and can at least pick up when bad vibes are lingering. Her temper, though harder to activate, still very much exists. Poke at her too much, and you may regret it. She still harbors a level of distrust towards fae and is against joining dragon clans. Currently, she is much happier as a loner.


Long ago during the medieval era, there was a lord who lost his wife. He married a fair lady of his social class and watched her perish to childbirth. His despair was undercut by the cute daughter he ended up with. Though she could not inherit his title on her own, she was precious in the sense that she was a piece of his past beloved. Thus this little girl would be spoiled to the core. Whatever she wanted, she would get. Ivanka was his little princess.

A terribly bratty princess she would become.

Greed consumed the girl who had it all, leading her to never being satisfied with what she had. Always wanting more. Wanting something new. Wanting something better. And the lord would indulge her avarice. Each and every time. But if he taught her any discipline, then perhaps they would've been saved from their fates.

Growing on the outskirts of the territory was an incredible forest. It reeked of strange energy and seemingly appeared overnight. Everyone had a bad feeling about it; no one wanted to get near it. After all, that place seemed like it was out of those fables parents told their kids. Too bad the lord never told Ivanka any of them. The moment she spotted this fantastic place, she spouted several very familiar words to her father:

For once, he felt conflicted. He thought it was an atrocious idea. Who knows what was in that forest? What if the inhabitants came out and harmed the people? Thus he, for the first time, denied her request. This only served to make her cry. She cried and cried, the bratty teenager. Accusations of his dwindling love flew out; complaints of past transgressions were brought up. It would not take long for the father to crumble and give in to his princess' demands. At her behest, soldiers were sent to claim the forest in the name of the kingdom.

...too bad that was the home of the fae.

In retaliation, they forced the invaders out, stormed the castle, and kidnapped the brat from her comfortable abode. To pour salt into the wound, the lord was cursed with impotence. Thus he could not birth another child. This left him scrambling to find his daughter, only for him to die without ever finding a trace of her. The lack of a heir led to the political structure collapsing and the territory getting taken over by foreign powers.

Meanwhile the fae spitefully transformed Ivanka into a beast that reflected her nature the best: a green, greedy gem dragon. Realizing the power the curse gave her, she was immediately shipped off to be forcefully coupled with a clan heir. Thus she would bear several children with Frederick Valdur, the heir of an elite dragon clan that was dying out at the time. She never loved him and wanted nothing more than to go home. She refused to even directly care for her children. This bothered the clan, but Freddy refused to do anything about it.

So she did something about him. Him and the entirety of the main family. (Minus the children; they were simply abandoned.)

In an eventual rampage, she learned how to utilize her newfound talents by killing them. Out of bitterness and spite over her century of misery, she began to freely hunt down fae and dragons. With each scruffle and encounter, her fighting skills improved. Thus gone was the lord's daughter; no more was Mrs. Valdur. She became the notorious Blood Emerald. Those within the right communities telling stories of a rage-filled emerald dragon mercilessly hunting down people without care. Do not wander near caves alone less you risk her wrath.

Ivanka almost dived off of the slippery slope when she kidnapped a bunch of young fae children. She had terrible intentions for the minors. However, just before she laid the fatal blow to the first child, she noticed the fear in his eyes. The tears flowing down his face. The odd level of acceptance he held. This was his end, and he could do nothing about it. It was through his eyes she realized her selfish ways. For the first time, she shifted back into her human form. Unkempt and remorseful, she turned away from her would-be victims.

Moments later, she was captured. Turns out she intercepted a convoy of children heading to a mysterious island to learn magic. The Manta Carlos officials immediately searched for the missing children. While mostly intending to question her, the hunter admitted to her crimes and asked to be taken away. She went through rehabilitation and therapy mixed with some classes on cultural sensitivity and power training. Through diligent study, she learned to adapt to the modern world and worked out some of her past issues.

She earned her way into having a normal life as a fitness trainer on the island. Her fighting skills as a hunter translated well into arena fighting (albeit with less deadly intent).

Resources: Being she has the mundane thing known as a job, she is able to afford a studio apartment with a few minor luxuries. All of her resources come from herself.

Notable Features: Tends to look like she's glaring at everything intensely, even when she's relaxed. Probably the red eyes.

Abilities Summary: Cursed into being a dragon. Can make green tourmaline constructs and sniff out people's races in a broad sense. Turns draconic, loses speed, and becomes heavier when showcasing greed.

Reputation: Common townspeople would maybe know her from the ring or the gym she works at. Dragons and fae, particularly those apart of clans/families, would realize she fits the bill for "Blood Emerald", a notorious monster hunter. Possible rumors about islets, but most wouldn't have the full story.