[Official art of Lawrence Nickwell from Metal Waltz/Panzer Waltz]​
Helmut has a pale complexion, blue eyes and white hair. He stands at a flat 6ft and has an average build. He often carries himself with dignity but at the same time he paints his face with a kind look and humor, but his eyes are sharp.

Personality Description: Helmut is carefree around pleasant company, but he becomes much more professional and business-oriented when it comes to work and serious topics, however rarely losing his calm features. Despite how he might carry himself, he lacks empathy for people who are against him. Those who he sees is on his side, or at the very least useful to him, will find him to be pleasant and helpful company.

He is often distracted however and a bit clumsy at times, accidentally dropping things and knocking things over as if he forgot they were there in the first place. However there is always one thing that he never drops or handles carelessly, and that is his engraved Radom pistol which he always carries around with him. Should he leave the weapon behind, it always comes back to him, sometimes as if he never left it at all, or that he summons it back.

Helmut appreciates works of art, be it paintings and sculptures. Abstract paintings however are a hit or a miss with him, and he isn't afraid to be snide about it though he will outright verbally attack the piece or the person who made it, often calling one or both pretentious among other things. Snobbish as it may seem, he does go out of his way to soften blows if the situation calls for it, such as dealing with children. He's no heartless monster after all.

Biography: Helmut has a muddy past, but in short, he lived in Germany before the war. When the second world war erupted, he was drafted as a Hitler youth. He performed well and was chosen to be a guinea pig on some experiments he was not in a position to decline. He wasn't the only one, and he and those who survived were made into a squad. All child experiments. He didn't stand out all that much. Compared to the others, he was mostly just a simple soldier who was just tougher and couldn't feel pain. He was no better than a bullet sponge. A later experiment made it so he could move much faster.

That is until one mission where he was to steal an artifact. He found it and something happened. Something spoke to his mind. He couldn't recall what it said but when he regained (most of) his senses, he was in a room full of dead allied soldiers.

Slowly he found that he could move things with his mind, and then absorbed a soldier's knowledge after touching them with his hands ungloved. This made him great for interrogating people, even though it nearly makes him a vegetable every time he uses this power.

Sometime later, the squad agreed to escape this life as mere pawns. They had their own reasons, but Helmut's own reason was this: His new power revealed intentions of what his superiors would do to him. They wanted to know what the artifact did to him, and as soon as his usefulness was deemed replaceable, he would be put to new experiments. Ones he was sure he would never survive. And so when the time came, he left and parted ways.

It was after the war when he heard the voice talking to him in his sleep. This being wanted knowledge, it didn't say what it wanted or needed, but Helmut guessed it wanted to learn everything. If he helped this being, it would make his life much more convenient. And so for a time, he went to people who knew things he didn't and stole what they knew for this being, learning new things for himself as well.

It just so happened some people... knew more than any human should, and this lead him to the island of Manta Carlos. He was amazed at this place, and eventually found employment as a scout. But with how many people that could read minds, the being gave him another gift, one that would hurt people if they so much as try to make any mental connection with its pawn. It wanted knowledge, but it wasn't willing to share it.

Resources: A large house with two stories, fully furnished with all modern luxuries, including an indoor swimming pool that could fit 12 people, a den, five rooms, two of which belong to the maid and butler, a personal library, and a balcony on the second floor. This was ill-gotten property, won through a high-stakes wager that unknown to his opponent was tilted to Helmut's favor. Has a decent amount of money in banks both in Manta Carlos and the narrow reality. Has a number of personal contacts that he uses to get information on what's happening around the world, including those of the supernatural variety. 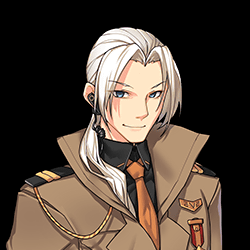 Helmut gets a new arm

Helmut now has a new prosthetic arm to replace the one he lost because of Aranea's doppelganger during the reappearance of DCA
Click to expand...