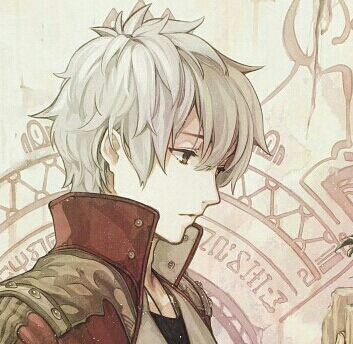 Image is official art of Logix Fiscario from Atelier Escha and Logy: Alchemist of the Dusk Sky


Stands 6' tall, with messy dusty white hair and glowing gold eyes. Clothing includes a black shirt with a reddish-brown coat over it, gray brown pants and white boots, it all has a military feel to it. A pair of grey wings that are slowly turning black.

Hadrian is generally a little quiet and shy, with a calm and cute smile almost always on his face, with a big warm heart. Having grown up in an isolated military outpost for angels meant he was largely isolated from the rest of the supernatural community, he grew up with military discipline and training and so was expected to grow up be an angelic angel and one day an archangel. This left him with little to no time for a personal life, his older sister was his only steady friend and so the two have a strong bond, but he craves relationships in general, he wants to meet and befriend people. Having never dated or had any sort of romantic encounters has left him easily embarrassed by such things, flirting with him will cause him to quickly blush. His isolated upbringing has left him with a strong sense of curiosity, he craves knowledge and experiences, this can be good thing and allow him to learn but also lead him into trouble, via him poking his nose into things he shouldn't. Though he's never spoken about it, he has mixed feelings about his parents, he misses them but he's also angry at them, and still at times feels like a disappointment. The loss of his home and future has left him feeling lost and purposeless, he craves direction, a new purpose to follow. Overall, he's a kind and shy young man, who hopes to gain new experiences in his new life.

His time on the island has lead to some interesting developments, he's begun rebelling against his upbringing, dying his hair, drinking and generally acting like a teenager, this experience binge has been overwhelming at times, increasing his feeling of being lost and he's unsure who he is anymore.

An enchanted blade, as strong as the finest steel. Any damage done to it will self repair in twenty-four hours. Can be summoned when needed. The sword has other abilities, but as it's current wielder is inexperienced in its use they are all locked away.
•Power Bracelet: He has a power bracelet that shuts off all his powers and abilities when worn.
•Weakness: It causes him to be twice as affected by auras.

Passive:
•Emotional Beacon: He has a sight based aura that makes people who feel lost or alone drawn to him. They will feel the affects when they look at him, and being around him will grant them a sense of belonging and companionship.
Beacon Aura Expansion: His aura will now have a more profound affect. It'll make people feel very calm around him, as well as draws the truth from them, meaning they'll feel more compelled to be open to him on their thoughts and emotions. It's still sight based, and still only affects those who feel like outsiders.
•Immortality: Will stop aging in his twenties. If killed will respawn in limbo (instead of heaven as he started to fall from grace) and spend a week there healing before returning to Earth. Can be permanently killed with weapons forged to harm divine beings, or by high ranking archangels or demon lords.
•Desease/Toxins: He cannot die from deseases, poisons or toxins. He will feel their affects but they won't cause physical damage and he'll always recover from the affects.
•Enhanced Strength: Can lift and carry two tons.
•Flight: Has a pair of black angel wings that grant flight. Can make them appear and vanish as needed.
•Shadow Magic Vulnerability: As a being of light, he's very vulnerable to shadow magic. It can easily harm him and being exposed to it can cut his strength in half.
Empathy: He's able to sense the emotions people are a feeling, via looking at them and focusing. He's able to sort through the emotions and it's many variations, for example, he's able to tell platonic love from romantic love. He's also able to sense who or what the emotion is directed at if they are nearby.
Minor Demonic Ping: If a being is able to sense demons Hadrian will ping for this. But it'll be slightly different, the being will be able to tell that Hadrian is somehow different. This is because he wasn't born with demonic heritage and because he's still capable of regaining his angelic grace.

•He's living off a school scholarship and the money he gets from a part time job.

•There was an angelic outpost, a small military city of sorts, floating above Earth, magically hidden among the clouds. The angels and archangels there watched over mankind, secretly defending it against negative demonic influence.
•Two of these archangels had children, a boy and his older sister. The boy named Hadrian was raised to one day be a soldier and then eventually an archangel. While he took to the combat training well enough he overall grew up a rather quiet and shy boy, not someone one would expect to be an archangel one day.
•So growing up he was maybe viewed as a disappointment by many of the archangels, including his parents, he just wasn't living up to their expectations. Given all this he had little time for much of a social life, he had his sister, with whom he had a strong bond with, but he didn't have many friends, and he wasn't very close to the few he had.
•Then one day, the outpost was attacked, by a group of demons and other supernatural beings. The battle was long and terrible and the siblings had to defend themselves at times. In the end their parents were killed and the city destroyed. They barely escaped as the city fell apart, their wings allowing them to fly down to Earth.
•Unfortunately, they were unable to make it to land and ended up in the ocean. Together they survived, and washed up on the shores of Manta Carlos.
•The new freedom the island has granted him has lead him to go one something of an experience binge, leading to conflict and regrets. He's still dealing with things.
•Upon arriving on the island he was astounded by his new home and the freedom it granted him. Unfortunately it proved to much for the young people, he ended up being used by several people who'd taken advantage of his naivety. In the end he started to fall.
•His sister despite being very close to him couldn't handle the idea of her brother becoming fallen. Disowning him she'd take passage to the heavens, leaving him alone on the island.
•He'd spend the next months in a deep depression, attending classes but largely cutting himself out of social interactions. Recently he's started to try and rejoin social life though he's still quite lost.

•The emotional beacon power is new and will be discovered in threads.
•Was trained in combat by his parents.
Last edited: Jan 14, 2019

Notable Features:
Eyes are a bright slightly glowing gold, hair is white, clothing seems almost military like, has a pair of grey angel wings he can make vanish and appear as needed.

Physical Quirks:
He's very curious, wants to learn everything about the island, lots of reading and general looking at things, eyes tend to zip about studying things. A bit shy, with a cute smile, always bows in greeting. Wings twitch when nervous or stressed.

Power Summary:
Species: Immortality, flight via wings, enhanced strength, cannot die from disease or toxins. Vulnerable to shadow magic. Pings as a not-quite-demon.
Enchanted Sword: Can be summoned as needed.
Emotional Beacon: He has a sight based aura that makes people who feel lost or alone drawn to him. They will feel the affects when they look at him, and being around him will grant them a sense of belonging and companionship. They feel more calm, and are more compelled to open up to him.
Empathy: Can tell the emotions being felt around him to a fine degree by looking at people. Can sense who the emotions are being felt towards.
Power Bracelet: Has a general power bracelet that shuts all his powers and abilities off but makes him twice as affected by auras.

Reputation:
He's the cute new student, a little shy but very friendly with a heartwarming smile. Hes incresibly close to his older sister. Besides that not much is known, it's rumored he's a refuge of some sort.
Recently he's gotten a reputation as a sweet kid that's gotten lost in the madness of teenage life, he's seemingly overwhelmed himself and it's rumored he's actually becoming a fallen angel.

Misc Information:
Height often makes people think he's older.
Always wears a beaded bracelet to show he has an aura.
Currently looks a bit off and disheveled, as if he's emotionally drained.
Wings are grey with a few black feathers.​
Last edited: Jan 14, 2019

Hadrian's emotional beacon is stronger, and he now has empathy.