Description: 1.82 meters, about average weight for her height, lean build, possesses a slight tan, looks almost 20 years younger than she really is. Her red eyes and long red hair are the most striking features. She's often serious and calm, although she can sound cold to people who really gets on her nerves, and nobody dare dishonor her or her family in her presence. Often wears suit.

Abilities Summary: Despite being just a human, she possesses the ability to strike fear in the people who glares deep into her eyes, and in fact her colleagues notes that when she's angrier it looks almost like her irises turns completely red, and some people she interrogated said they had nightmares after being just stared into their eyes by none other than Samantha herself. Her investigative and deduction skills are also impressive, certainly above what you'd expect for a prosecutor.

Reputation: Japanese Prosecutor famed to be "the nightmare of every criminal", Samantha the Red. Has some reputation around big shots outside Japan.

Misc Information: Mother of Bastet and her siblings, has contacts with a few mafia groups that leans greatly towards a vigilante-like activity, but that is to make sure they don't go getting themselves in trouble. Back at the school days she was a troublemaker until she joined the martial arts club and climbed to the highest ranks since.

Description: Both are remarkably shorter than their big sister, almost 1.5 meters. Anubis is a little bit on the chubby side, while Maris is slim. Their hair is almost golden, their eyes are of a light brown, and while he has an actual tan from beach activities, she is more towards pale. Another distinctive trait is that they both wear light clothes on top and dark on bottom, so expect black shoes and pants and white shirt, for example.

Abilities Summary: Neither have any unnatural powers, however Anubis is a judo practitioner and Maris is in the track & field. That's all.

Reputation: In their school, Anubis has the reputation of Nurikabe because of how hard it is to get him down, while Maris is known as the Kamaitachi for being one of the top runners.

Misc Information: Children of Samantha and younger siblings of Bastet, they both love to see their big sis flex her muscles and show her powers and shares some interest in Tokusatsu (Live Action) with her.

Description: 2.03 meters, slightly above average weight for his height, lean build, fair skin tone, looks like he's in his late teens (one would mistake him for 17 or 18), red-brown eyes, and short black hair slicked back with two short locks pointing out like "horns". His calm and friendly demeanor cannot be mistaken for one of a weakling, as deep inside lies a hot-blooded tough guy.

Abilities Summary: Although he is a human, he possesses unusually high spiritual power as a consequence of his training in martial arts and can control that spiritual power really well, which results in him being capable of packing quite the punch, but he keeps that in check since the accident in the match that ended his fighting career.

Reputation: "Demon Fist Honda", from his boxing days, "Silver Lance Shu" once he became a Mangaka.

Misc Information: Considers Sumi his little brother, used to be in the boxing club at the school until he accidentally broke an opponent's arm in two with his "Tonbogiri Jab" technique. After becoming a Mangaka he made works such as "Our Beloved Demon King" (A Manga focusing on a demon king that is nice to his minions and nowhere as evil as humans believe he is) and "Ogre Savior" (Short series about a Red Oni who beats sense on some punks to protect a human neightborhood). Moved to Manta Carlos recently and has a small studio that also serves as residence for him and Sumi.. 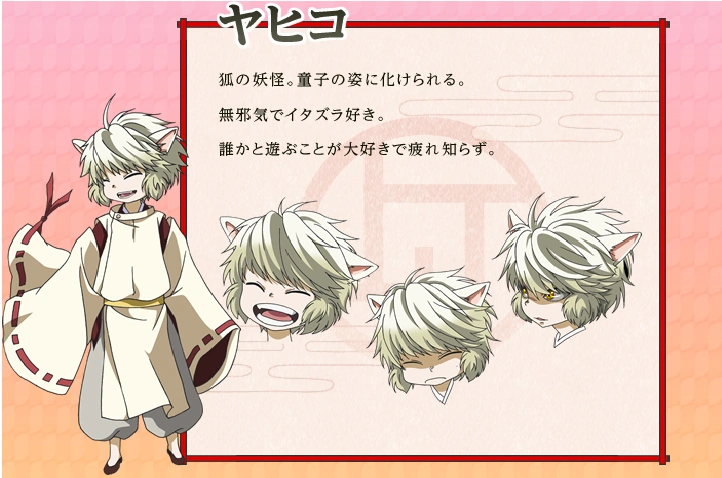 Description: Around 140 cm tall in his human form, about 127 cm in kitsune form and no taller than an ordinary adult red fox in, well, fox form, Touyou bears a slightly pale complexion, slim build with matching size-weight ratio across all forms, and golden eyes, choosing to dress in a more traditional Shinto style as a kitsune, and extremely casual as a human, his hair white in both kitsune and fox form while his human form has a blonde hair. Around most people he acts like he's between 12 and 14 years old, but around divine figures he leans more towards a 16 to 18 years old.

Abilities Summary: Basic shapeshifting, rarely strays from three forms and when he does it's no bigger or heavier than a healthy 14 years old. Knows some low level self-healing spells and can only make fox-fire up to a baseball in size. He reports to Inari through a white and red notebook, where the messages appears and disappears magically.

Reputation: Those who have known him since his creation either calls him "Inari's Lapdog" or "Little Inari" (In a gentle tone).

Misc Information: He wasn't born, he was an Inari's Fox statue that Inari breathed life upon and ordered to keep tabs on Umiko Mikadzuki. Ever since he has been the Celestial Fox's apprentice as a cover up for his real duties. Even though he keeps the act, Touyou doesn't tolerate insults towards Umiko. Shares residence with Umiko, sleeping right next to his face in fox form. Likes being called "Toh" to keep things simple.

Description: Elpizo has a body structure similar to a Greater Bird-of-Paradise, including feather structure and tail, however he is larger than one (86 cm, from base of the tail to tip of the beak, with a wingspan of 170 cm), feathers naturally bright orange to bright yellow, rarely on fire while not flying. Has quite a feisty personality when Serena isn't around, and otherwise is quite a jolly fellow with quite some pride. Always displays concern towards Serena due to a shared connection.

Abilities Summary: Heals unnaturally faster from any kind of harm, turns to ashes on death and rises back to life from it. While immune to most poisons, he can still fall ill and even die for some. Cursing Elpizo will prove to be bad for whoever attempts to, as the curse may rebound (albeit with reduced efficacy) on the caster, but beneficial spells can be cast upon him without repercursions. His blood can be used to heal any living or unliving being, being able to act even beyond curses. Because of blood ties with Serena, he can feel whatever she is feeling regardless of distance.

Reputation: Within the Narrow Reality he had numerous names, most notable one being "Old Pierrot", the Greater Bird-of-Paradise that outlived the expectations by a couple years (32, when they normally live up to 30)

Misc Information: Elpizo is one of Serena's "Blood Father", in that his blood was used in the process used to create her in a manner similar to genetic manipulation or cloning. The blood was drawn by the other "Blood Father", Dr Gestalt Chìhóng, who gave it to Serena's mother, Selena, as part of a deal. Dr Gestalt also applied on him a special spell to disguise him as an ordinary Greater Bird-of-Paradise in an European Zoo and periodically went to ensure the secret was well-maintained, including camouflaging Elpizo's death and rebirth.

After being acquired by Serena, he was considered her pet but is let to be as free as he wanted within Manta Carlos, and she even treats him with proper respect and care he deserves.

NPC Status: Only me RPing this one.

Description: Dr Gestalt is a devout practitioner of medicine who disguises himself as a German-Chinese Eurasian, almost 2.3 meters tall with blond hair and vivid teal eyes, seemingly 40 years old. Disguise aside, he's a red pheasant wreathed in flames that is about as large private jet with a tail almost twice as long as his body. He's usually serious and calm, but is specially fond of people who puts saving others' lives over their own, which led him to meeting Selena and later contacting Serena. Deeply he really wants to live with her, but his patients needs him more.

Abilities Summary: Aside of his vast knowledge of medicine, Dr Gestalt is proficient in a multitude of spells from before his birth to today, having never stopped studying them and even camouflaging magical presence. Along with his magical knowledge, Dr Gestalt possesses immunity to poisons and curses, can heal nearly instantaneously from any harm and live for countless centuries. Despite all that, he practices conventional medicine and favors the taking normal means of transportation, only using his bird form (however with a shrinking spell added) when he needs to urgently move around, and being extra cautious about it.

Reputation: Mister Lifeblood in online communities. Outside of that he doesn't have a huge reputation outside Europe and it's a spotless reputation too.

Misc Information: Dr Gestalt is the other of Serena's "Blood Father", having supplied her mother with the blood of a phoenix (Elpizo) as well as his own blood. Initially his idea was to create a new being via Selena's medicine technique that would be able to bring people who recently passed away back to life and carry on her desire to heal. After Selena passed away, he distanced from Athens, having believed their research to be a failure, unaware of Serena's existence for many, many years. For that long, he only kept caring for his patients and checking on Elpizo to make sure he was well and safe, but eventually learned of Serena and started to make frequent contact with her. Despite his nature and connection to Serena and Elpizo, he prefers to live in Europe rather than move to Manta Carlos.

NPC Status: Only me RPing this one.