Getting to know Foxi Roxi

With the growing popularity of a certain individual, Roxi Smoak was becoming the highlight to some people's days.For others it was becoming a nightmare. Roxi is in every case of the word, attractive, to most intelligent sapiens. Long legs, a killer tan, eyes to die for and a bust that would make most women envious. She was athletic, a dancer, a cheerleader, and while her grades were not phenomenal, her school spirit was second to none. Roxi might have the prettiest smile in the school, but god was she a bitch. She was part of the top five, meaning her popularity was more important than most of the mundane dregs that walked about the Academy. She cared little for the opinions of others who were beneath her stature, and she was quite verbal with people who pissed her off. With how popular she was, you'd think she would be a nice woman at heart. That could not have been farther from the truth. Being an ambitious woman, sometimes you needed a Bitch to get the job done, and that was her mentality and her mindset. Screw everyone else, so long as she was doing what she needed to do, everyone else could be damned.

And she would prove this day to day, her language as colorful as the pastels that wrapped around her body in fashions that were compared to high class snobbery. The woman drank deep from the fountain of beauty and she would never look less than her best in public. Striving to be something more than just a cheerleader, her ambitions to be a model or an actress on the Big Screen were enough to keep her in check during her teen years. She had to make the best of what she had going, and having a killer body now was great for the road of success. Under a golden sun, the woman sat on the bleachers outside in the vicinity the Sports Field. She was just finishing up her routine with the others and went to grab a cold drink of water from her bag. Pom poms at her side, the woman lifted one leg over the other as she stared down at her phone and tilted her head. The long tendrils of rose and pink hair fluttered aimlessly off her shoulders from a passing breeze as her short skirt ruffled from the lingering movement of the wind. Pink eyes shifted and she looked up for the moment as person just stared at her. She didn't say a word, but her eyes were quite verbal.

"Ew. What the hell do you want, Loser?"
"Oh Roxi! I just wanted to say how awesome you looked today and your routine was really goo---"
"Thanks, you can leave me alone now. That's enough of...whatever that is going on with your mouth. The talking thing..."

She would shoo him away with her fingers as her attention was once again averted to her cellphone.Roxi would make mild noises of disgust or annoyance as she sped through her texts and typed as her nails clicked across the surface of her phone.

Once more she was interrupted, her dark brows furrowed and her nose scrunched and her nostrils flared.A rapid succession of words came rolling from her mouth of the most...unlady like of ways as the boy who had such admiration for her could not simply take the hint. The woman looked at him, his smile was large and he seemed to hold a pen and paper in his hand as he looked at her with a goofy grin on his face.

"Ok! What the actual Hell do you want?"
"Hey Roxi! Do you think I can get an autograph or something? My friends wont believe I actually talked to you unless I had some kind of proof or something. You think you could just make it out to Charles?" He seemed like a freshman kid, no doubt he probably saw her walking down the hall or something and caught whiff of her growing popularity. The woman nearly sent ice daggers into his soul, but he seemed unmoving by her Bitchy nature, or just oblivious of it all together. She gave up, "Fine! If I do this for you, will you leave me alone then? I don't want to see you again. Like, ever!"

"Oh! Thank you, Roxi! You have no idea what this means to me!"
"Whatevs!" The woman yanked both the pen and the paper from his hand, caring little if she ended up pricking him from the point of the writing tool or the sharpness of her nails. With a quick scribble of the name Roxi adorned with a heart as the dotted 'i' in her name, the woman kissed the paper as a little something extra for him to brag about. Her pink lipstick covered the page over the name "Charles" which may or may not have been spelled correctly. She didn't care.
"There, now GTFO."

He thanked her again and stared at the paper long and hard, "Thanks, Roxi! Now maybe they will stop picking on me about the wet dreams I have been having with you!" The phrase alone almost made Roxi want to vomit. She swallowed hard as the boy left with a hurry. She sighed and placed her hand over her forehead, a rather melodramatic pose as the woman sat there and picked up her phone once more to resume her speed texting. With the sun so high in the afternoon, she had to squint from it all.

Digging through her bag, the busty pinkette grabbed two things. A pair of designer sunglasses and a strawberry lollipop. Roxi was known for her killer legs, but also known for being highly suggestive when she went on and on sucking on her lollipops, she was a fiend when it came to those things. Always something in her mouth when she was around. She ended up leaning back, allowing her long legs to unful away from her body, resting one over the other. The golden sun looking down straight at her as the bronze color of her tan was highlighted by the tones curves of her body as she moved to sit comfortably. Roxi tossed her phone into her bag and swept the long hairs away from her shoulder and cheerleader outfit, eyes closed as she leaned back and allowing the sun to dress her in the warmth. Finally, some peace and quiet after a long routine. Now...if it would only stay like that.
Last edited: Oct 10, 2018
The Young, The Bold, The Restless Roxi Smoak! 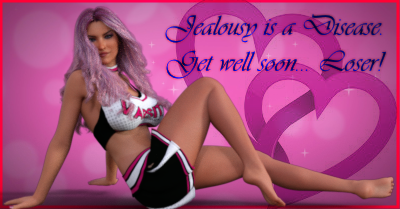 Elisa watched Roxi from a few rows away, wishing she had the bow she learnt to use with Liliana. Not that she would actually use it. Her aim was still horrible, and being the treasurer on the council mean she had to act more responsible than someone like Roxi, who definitely suited the American trope of "Rich Bitch".

Elisa was bi, and when she was Eli, she might have actually have been aroused by Roxi's display, but currently, it looked to be nothing but a messy way to eat.

Watching the boy with the autograph leave, she almost felt sorry for him. Almost. He was a creep, but he didn't have to be treated that rudely for an autograph, sure he made it weird, but still, rude.

Sighing, she moved across the three rows to sit behind her. "You don't have to be so rude you know."

Now that she was in the range of her senses, she could tell Roxi was not a good person internally either. The Rich bitch Facade was actually true.
Dead <-> Alive​

Nope. Couldn't have lasted more than five minutes until some meandering piece of trash had to talk, not only that, but get up right behind the woman. Roxi remained still, her eyes blinking behind the large, dark frames of her sunglasses. The only movement that was made was the scrunch of her brows as they came closely together in an expression of confusion. Was someone actually talking to her? Again? When she was trying to relax?

The woman leaned forward, her waist turning ever so slightly as she dipped her sunglasses down to draw upon the person who had spoken to her. Light brown hair accompanied by large blue sparkling eyes. She didn't know the face well, but there was talk of someone with the same bewitching set of eyes on the Student Council that Roxi may have heard about from the others. She took the lollipop from her mouth and held it in her hand daintily as she looked at the other female.

"I was not being rude. What is rude is interrupting someone who is trying to rest from a long workout. If you want an autograph too, you'll just have to come see me again another time. One is enough for the day."

The stick of her lollipop rolled corner to corner of her pink glossy lips as she plunged it back into her mouth. The cheerleader didn't acknowledge the person any more than that since they didn't bother to introduce themselves, even if Roxi already had somewhat of an idea of who it might be. But that was irrelevant, because if they were said person, it didn't make much difference. They were a Loser. And Roxi most definitely didn't spend her valuable time with the loser crowd. The feisty woman than turned, grabbed her bag and moved several inches to the left and once more rolled one tanned leg over the other, leaned back and allowed her head to drift backwards as she let the warm settling sun to glaze her body once more.

She no longer thought of the suspicious person who had crept up behind her and began to assume such things like being 'rude.' She rolled her eyes from the conversation, the little pipsqueak didn't even even look like a proper chick; no bust, short brown hair, no makeup, completely Plain Jane. Roxi lifted her hands and arms above her head to stretch the muscles in her shoulders. The small pops from her joints were a great release as she sighed, allowing one leg to bounce freely over her knee as she continued sucking on her strawberry lollipop. The fragrant woman heard her phone going off from within her bag once more, the tone causing her to lurch forward and dig through it as she once more was in a blitzkrieg of sending speedy text messages.
The Young, The Bold, The Restless Roxi Smoak!

Elisa watched as the Girl moved as if what she said didn't even matter. In this worlds, many afterlives, how many would consider her good?

"I may not be a cheerleader, but I know about your resting. It's cooling down the muscles used in strenuous activity, and unless your mind gets tired from such movements, you should be fine for a conversation."

The bluntness of the statement startled her. It wasn't intended to be so rude. But Elisa didn't mind. It had to be said.

When Roxi moved over to the side, Elisa put her elbows on her knees, fully aware she was being judged. "Not everyone was blessed by puberty. I can be pretty when I want the attention."
Dead <-> Alive​