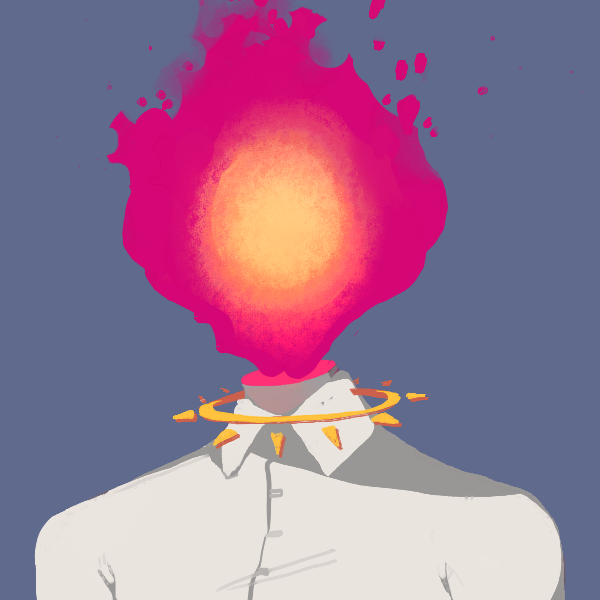 
APPEARANCE​
We all know Francisco is hot, like literally hot but also still sexy hot. God damn, just look at that beautiful floating flame of a head he has! Francisco also has a golden halo floating around his neck.

In his human form, Francisco has red flowing hair that just looks further beyond fabulous, And those eyes, those gorgeous sexy eyes he has. 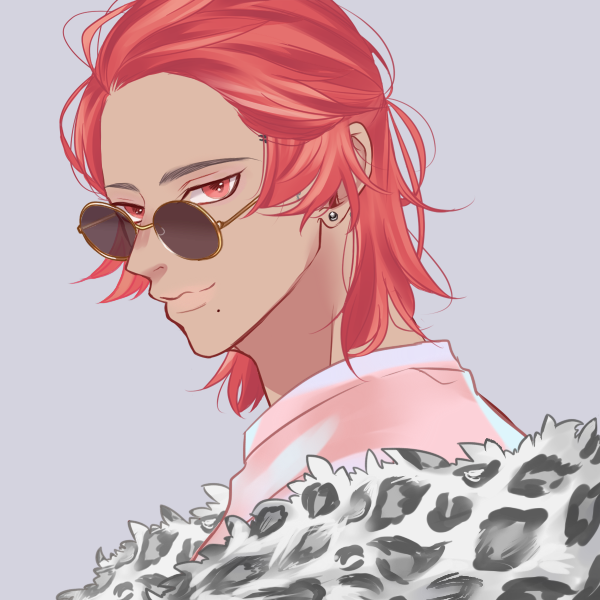 Made in Character Maker by moro
He is average in build size, just right in the perfect balance of a fit and fabulous sexy body amigos. He is 5’10” and he has brown (almost bronze in complexion) silky smooth skin that has little flames that appear and dance around his body.

Francisco is a very stylish man who wears the most expensive name brand things he can buy that also makes him standout. He is all about looking good fashion wise. He is reaaaally clean and good at looking fabulous and hot as heck. All his clothes are fireproof.
​

Four words that Francisco will use to describe himself. Well the last four words anyway, if Francisco had to describe himself he would start by saying he is the most good looking person in the room and anyone else is just a bit below him on the charts. He would also go as far to say that anyone with magically or non magically enhanced looks is a fuckin’ cheater and won't even be acknowledged.

Taking a step back from admiring his charming good looks, Francisco is….Francisco.

He's a wildcard, unpredictable. He does what he wants and most of the time what he does seems to have no logic behind them. Well there is logic but you would either have to be Francisco to understand it or….well...just be Francisco.

When he speaks he insteads purposely speaks spanish from time to time and also his own “Spanglish” and usually adds accents to words that does not have accents or rolls his Rs.
​

Active Abilities:​
Spanish Heat
With a few snaps of his fingers, Francisco can send out quick bursts of flames on varying degrees of intensity, brightness, and heat.
He can snap up a simple harmless flame, a bright blinding flash of light, to a very destructive burning flames of p a s s i o n that consumes aaaaall!. It burns hot like the soul amigos.
Snapping his fingers just act as ignition to light a flame from his fingers or ten feet away from him. The bursts of fire happen as fast as the snap and usually last as long as a few seconds. If Francisco puts more concentration and focus into his snapping he can easily cause things to light on fire and burn in a instant. He can control the heat of the flames to also create a everlasting "slowburn" type effect.
Slowburns last as long as he continues to focus on his target

Flash Fire
In a sudden burst of painless and non-burning flames, Francisco appears on the scene. It is just simple fancy fire teleportation. Francisco is able to pretty much teleport anywhere he wants as long as he has a clear mental image of the location.
​
Passive Abilities:​
Body of Flames
Francisco is practically immune to all physical damage unless it is enhanced with magic. He is immune to any form of fire or heat and also is unaffected by any smoke. Francisco’s body also can absorb any heat and fire and can generate its own fire. He can heat himself up or emit a small wave of heat to warm up the area or other people.


Lantern of Life
Francisco has a main source of flame that actually keeps him burning hot and alive as long as it never goes out. If his body was to “die” he will simply respawn from the lantern in a matter of hours.
Francisco can pretty much live on forever as long as the Lantern’s flame never burns out. He also doesn't seem to age a day.

If by chance his flame die out, there is a very specific and special way for someone to revive him by relighting his lantern.


​
Weaknesses:​
Water
Water is a tricky matter for Francisco. He is completely fine with taking baths, showers, and standing in the rain. Large bodies of water is a pain in the ass and good looks. If he isn’t able to easily get out or get caught too deep Francisco’s flame will just naturally “die” out.


Fueling The Soul
Francisco must eat something to keep himself aflame every now and then. So he has to eat things like coal or anything that just fuels fire.

Lantern of Life
If some cruel and evil spiteful ex-lover (or anyone) puts out the main flame in his lantern, Francisco will die. Putting out the flame in the lantern isn’t easy. It is magic fire that won’t be put out by simple and mundane ways. It is a persistent and pesky little flame.

Francisco can also come into servitude to someone if they were to obtain his lantern and perform a fancy dancy ritual.
​
Common Magical Items:​
Human Shape Charm
While wearing this charm, the character appears human. They lose access to any abilities they had as a result of any non-human physical characteristics of their original body. For example, a character who uses wings to fly will be unable to fly while using a human shape charm. Characters wearing this charm always have a single set human form, which resembles their non-human form.

​
Resources:​
Dance Instructor at Starlight Academy, lives in a studio apartment downtown
​
HISTORY​
Does it really matter how Francisco came to be? Well it most likely involved a lot of bumping in the sheets and maybe even a little magic tossed in somewhere but that’s all on a need to know basis.


Frito lived almost a normal life in out in the world of normies. He had to hide what he really was from his friends for a loooong time. He kinda fell into a life of crime by conning people here and there for money around the world, somehow joined some type of modern day ragtag group of thieves and feel in love with the art of dance

Life was great…up until he “died”. A con gone wrong and he ended up presumably drowning never to be seen again. A damn shame. Well he did die but was brought back by his mom after a scolding and she had him move to the island and since he couldn't exactly go back to his old life. Soooo he took his dancing talents to the school and became a teacher and all that jazz.​

Notable Features: True form wise? Literally a ball of fire for a head...and a lil halo around the neck

Physical Quirks: A lot of dancing

Power Summary: Immortal fire guy who can teleport using fire and snap up a few flames all flashy like.
Also immune to pretty much all physical damage if there is no magic packing behind it
Fire body, fire body, can heat up the area and absorb some heat
Human shape charm!

Notable Features: True form wise? Literally a ball of fire for a head...and a lil halo around the neck

Physical Quirks: A lot of dancing

Power Summary: Immortal fire guy who can teleport using fire and snap up a few flames all flashy like.
Also immune to pretty much all physical damage if there is no magic packing behind it
Fire body, fire body, can heat up the area and absorb some heat
Human shape charm!