Appearance Description: Short black hair, kept in a sort of attractive carefree messy style. Pale pink skin and pointed ears. Facial and body tattoos of special holy symbols to contain the demonic encroachment inside him. His left eye is a brilliant light blue but his right eye has a black sclera and fiery orange iris around a cats-eye pupil. His right arm is night black with bands of orange and small diamond shaped protrusions like ornaments. The demonic influence on his form fully encompasses that arm from shoulder joint down to the tips of his demonic claws. The black skin reaches out in strands from the joint across his chest and back. Several hard orange ridges can be seen on the right side of his ribcage and protruding slightly from his spine. Felen likes to dress in robes and fancy attire, having brought a decent amount in his bag when he arrived.

Art by DespairMode and adopted by me
Personality Description: He was a well-trained elven soldier before being demon-touched. He mostly retains his calm and relaxed manner, though at times the demon in hims draws forth with anger or bizarre desires. Like needing to collect a pile of left shoes. Felen is smart enough to know when to hold his tongue and let idiots make fools of themselves. He does lack a calling here though and unconsciously needs direction from someone or something to feel fulfilled.

Resources: He is living in a small apartment and works as a bodyguard for Zoraida Del Bosque. Retains a few outfits of fine elven clothing from his home along with an extremely well crafted mithril sword and dagger he brought with him. He also brought the remains of a magic-powered energy pistol but it is completely broken and unusable. 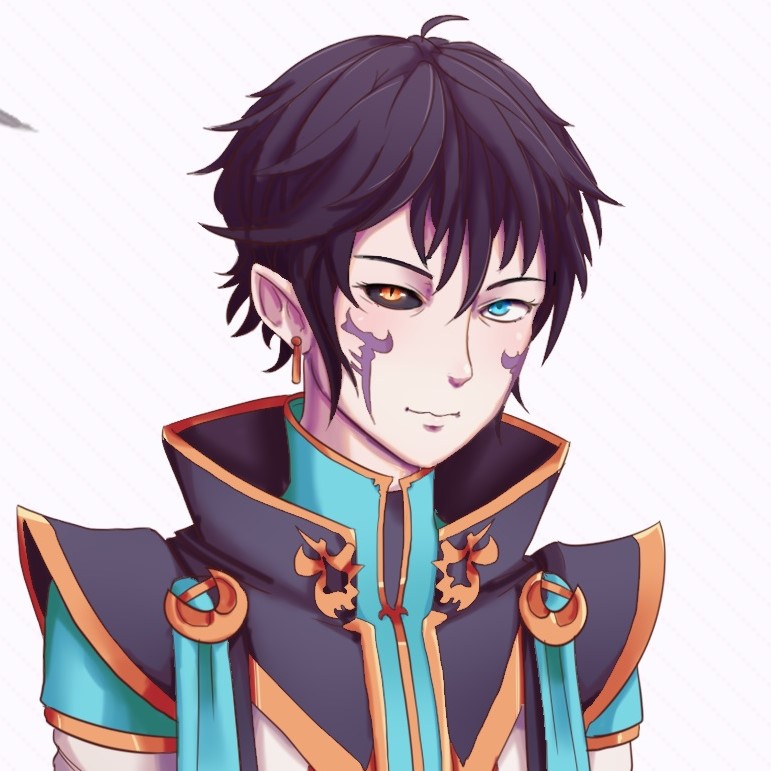 Notable Features: Black sclera with an orange pupiled cat's eye on the right side and light blue eye in the left. Right arm is black with claws and orange ornamentation. Usually wearing very fine elven clothes/robes.

Physical Quirks: He has a very smooth, beautiful manner of speaking. Refuses to shake hands with his right and tends to stand with his right side towards people, openly displaying the demon hand.

Abilities Summary: Very agile, athletic and flexible. Can see in the dark Demon arm that can stretch and grab at a distance. Shadow teleporting. Can summon a demon familiar. Omnilingual. Arm cant harm gods or holy items. Weak to all mental/emotional reading/manipulation abilities.

Reputation: Made a bit of a commotion when he appeared in a storage room on the Station several months back. New to the island.

Misc Information: Is usually carrying a fine mithril sword, dagger, and or a handgun sheathed on him where legal.
Art by DespairMode and adopted by me