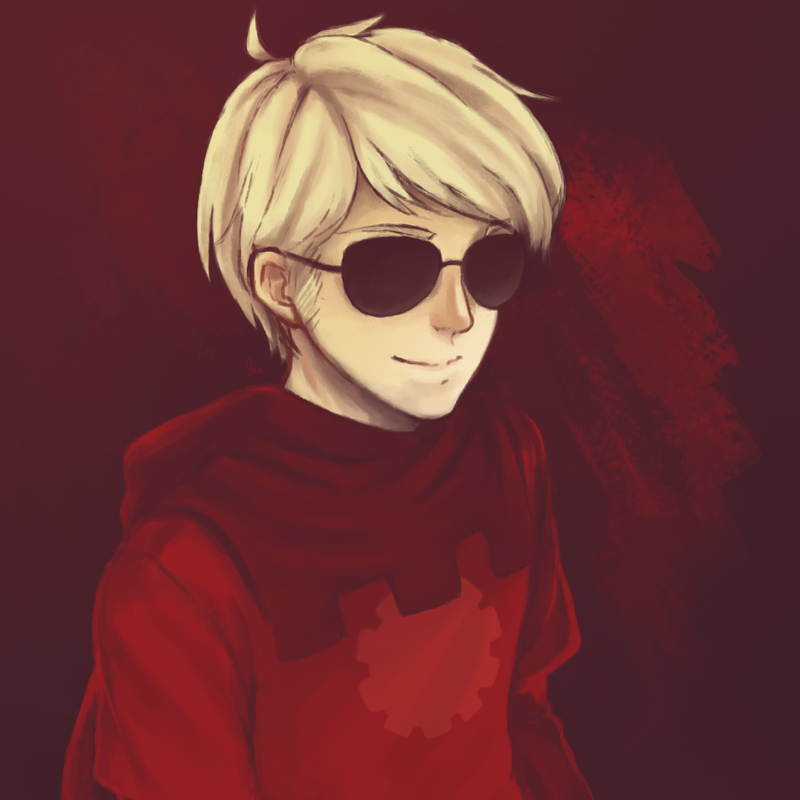 Image is Dave Strider from Homestuck, art by PandaleonSaa

•Stands at 5'5, blonde hair and somewhat pale skin, his eyes are red but always hidden behind a pair of sunglasses. His clothing is very casual, jeans and t-shirts along with his favorite red hoodie.
•Stands at 5'3, medium length blonde hair, pale skin and red eyes. Always wears sunglasses, clothing is usually simple, t-shirts, jeans and occasionally skirts.

•Zeke is a bit of an odd one, having few connections with people he can be a bit distant, he's been largely an outsider his whole life, emotionally shunned by family and potential friends. Because of this he's a little bitter, this cones out as occasional sarcasm and snark, though he does his best to frame it all in a playful manner people might possibly get small glimpses into him if they pay attention to the things he says. When not being playfully snarky he's a bit quiet and borderline shy, he likes being social and is trying to talk to people more now that he knows about his ability and how to block it, but he isn't quite sure how to make friends. He's particularly shy with girls he finds attractive, he's never dated, never truly been flirted with and past attempts of flirting on his part has ended badly thanks to his eyes. When not at school he tries to avoid going home until absolutely necessary, his rather poor relationship with his parents have of course affected him negatively, he's largely starved of any love and affection and so will be surprised by any he ends up receiving from people.

Common Magical Items
•Sex Swap Charm: While wearing this charm, the characters sex is swapped. They still look like themselves, and have a consistent other form that they'll take when wearing the charm. As a safety precaution, this charm also works as birth control for the one wearing it.

Active
•Dream Visiting: He can purposely enter a person's dream, in order to do this he must have met the person irl before hand. In order to initiate the dream visit he must focus on the person and then sleep. He has has full control of this dream and can alter it as he pleases. The dreamer never realizes that their visitor is anything but a part of the dream unless he reveals it. The dreamer can wake up normally, thus ending the dream.

Passive
•Terror Eyes: His induce a feeling of fear to those who look into them, they just immediately feel afraid of him and feel that they need to get away from him. This affect is cancelled by the use of sunglasses as being unable to see his eyes obviously means people won't feel the ability's affects, it also doesn't affect people who see him over video, like a video chat.
•Dream Roaming: When he sleeps there's only a fifty percent chance that he'll experience his own dream, the other half of the time he unintentionally visits other people's dreams. While visiting under these circumstances he cannot alter the dream, he's just along for the ride. The person having the dream won't realize he's a person and will just think he's just a part of the dream. He always remembers the dreams he roams into.
•Empathy: As an empath he's able to sense the emotions of the people around him, all they have to do is be within ten feet and he can sense what they're feeling.

Weaknesses
•Emotion Overload: Strong emotions can be painful to him, intense anger in particular causes bad migraines and stress when he senses it. Being in large crowds can have a similar affect as he'll be picking up many emotions at once. Overexposure to either will cause extended head pains and he'll eventually pass out.

•Zeke lives with his parents, both of which work and support him. He also receives a bit of money from his grandparents every month.

•There was married couple in London, one who'd married quickly and found that they didn't love each other as much as they thought. The marriage quickly turned sour but neither were willing to divorce.
•Driven by her unhappiness the wife secretly sought comfort in other partners. Unknown to her one of said partners wasn't human, they were a nightmare based being.
•The affair was short, the nightmare pretending to be human quickly left and the woman soon found herself pregnant. While she knew the child likely wasn't her husband's she kept this information secret and eventually gave birth to a son who she named Ezekiel, or Zeke for short.
•Growing up people often found something off about Zeke, something about his eyes were unnerving. It made it hard for him to make friends and develop connections. His parents became distant and emotionally abusive, with them feeling little connection to him. Unknown to anyone this was early manifestations of his terror eyes.
•When Zeke was twelve his father discovered the truth about his wife's unfaithfulness and that their son wasn't his. It was then that he became physically abusive of Zeke, with beatings becoming common though he did it in a way that made sure it wasn't noticed.
•Shortly before his sixteenth birthday his fear inducing eyes reached their full strength while at school, scaring many of the students and drawing the attention of scouts. After this him and his family move to Manta Carlos, allowing Zeke to enroll in the academy.

•Has a prized collection of comics that he keeps in his room.
•Has a pocket knife that he often carries with him.
•Female icon was made using this dollmaker.
Last edited: Sep 13, 2019

Physical Quirks: Has an English accent, refuses to take his sunglasses off.

The common magical item section has been deleted, Zeke's sex swap item has been moved down to active abilities.
Click to expand...