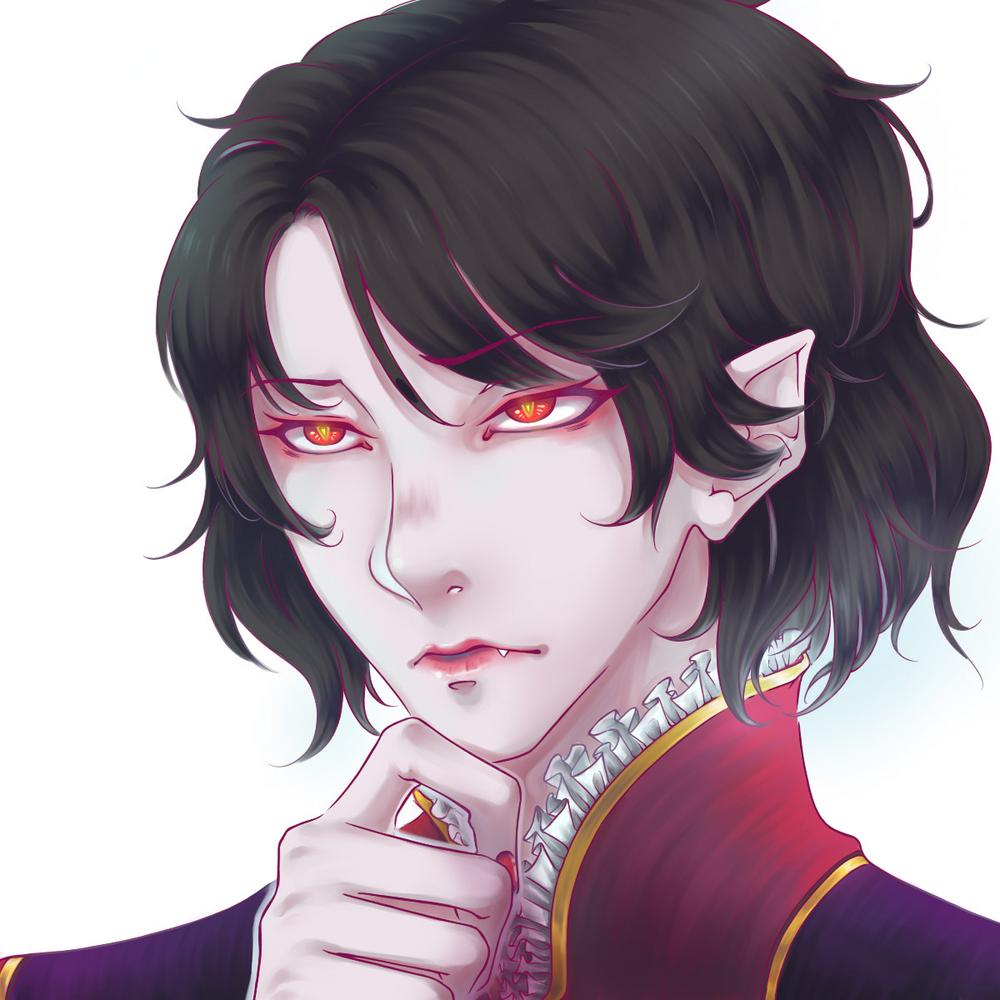 
Personality Description:
Dark sense of humour
Bored with life at times
Pessimistic
Sarcastic
Creative
Overly-dramatic at times
Eye for talent, can be encouraging when the mood strikes
Intelligent
Cynical
Perfectionist
Surprisingly patient with others
Good at teaching
Respectful
Moody
Artistic

Edwin can make faithful copies or replicas of any type of artwork he sees for a few minutes. He can also amuse himself by bringing these replicas (and other artwork) to life for a short time (30 minutes max) with a few drops of his blood.

During these moments of "life", the object/painting is not sentient. It might be able to sing, move or dance or even hold a short conversation, but the awareness would be comparable to the awareness of a wind-up doll or computer program. The subjects brought to life would maintain their art scale.

Example: a life-size horse statue would be life-sized, but a miniature figurine would stay the size it is when brought to life.

Edwin is immortal. But that doesn't mean he can't be killed or die if his head is removed and both his body and his head are set aflame and his ashes scattered.

He is also immune to any poisons and heals from most minor wounds almost immediately, though a major wound would take time (and an extra daily intake(s) of blood) to recover from entirely.

He also has enhanced strength and senses. He can lift three times what is normal for a human. His hearing is on par with a cat's, his vision is like that of a hawk and his sense of smell in on par with a bloodhound's.

Edwin also moves soundlessly and will often startle those around him for 'suddenly' appearing out of nowhere when the truth is as a vampire he has no footfall and therefore makes no noise when he walks.

Silver:
Edwin has a severe weakness to silver. He can hold or wear it for a short time, but the longer he holds it against his bare skin, the more it will cause his skin to burn or blister.

Sun:
Sunlight does not seriously hurt him. Although, he is definitely less active during the day, feeling lethargic and even a bit headachy at times if he is outside as it bothers his eyes and makes them water - with blood tears.

Blood:
Edwin needs about 2 liters a day to survive adequately. The more blood he has, the better he is all around.

Edwin is cursed. As a human, he angered a very famous painter he was studying under at the time, a painter who happened to also be a spiteful and envious witch. And as punishment for "outshining his master", he was therefore cursed to forever be able to copy and emulate the greatest painters and artists in existence. However, despite his ability, he would never become famous, nor his work recognized, remembered or celebrated. All his art, which there is a good number of in the world, is often seen as created or painted by an unknown artist.

- Edwin was born sometime during the Renaissance period in Florence. As a child, and later as a teenager, he was seen to have a budding talent for artistic endeavors and was sent to live and train under the patronage of one of the popular Florentine families at the time. There he learned the art of painting, sculpting, drawing, weaving of tapestries, and music. He was also given an education where he excelled at science and math.

During his time with said family, Edwin (then known as Stefano San Aubino) flourished and he grew in popularity and confidence, even receiving private commissions of family portraits and the odd fresco in one of the many churches, nunneries, and monasteries that littered the Florentine region and countryside.

Unfortunately, this budding popularity also brought with it quiet, and not so quiet, envies, and one rival, a painter he was studying under at the time, was deeply affronted by Edwin when he copied a painting of his, and improved on it, outshining the painter he was studying from at the time. Insulted by this, the painter (who also dabbled in the dark arts) put a curse on him so he would never succeed as an artist no matter how good he was.

Shortly after this unfortunate encounter, Edwin was hired to finish a mural at one of the wealthier houses
in Florence, and there he met the ageless Signora Bellaluna, who it turns out was a vampire and decided that she wanted Edwin for herself as one of her live-in lovers.

From this moment till sometime during the early 1800s, Edwin lived and followed Bellaluna faithfully as her lover, advisor, and companion. He also Anglicised his name and became Edwin St. Aubwyn.

During his mistress's many travels, the two of them came to Manta Carlos island when it was still a rather young place and only just starting to thrive. The two did stay for a while, intrigued by the idea of an island hidden from the world for creatures like them. However, in the end, Bellaluna found it somewhat constricting, and just not up to her standards in terms of culture, and so both her and Edwin moved on.

Fast-forward eight or nine decades, Edwin and Bellaluna had a very bad falling out - a simple disagreement at first had turned into a full-blown argument which led eventually to them actually breaking up - all because Bellaluna refused to believe or acknowledge that a breathtaking 16th century mural could have been painted by Edwin - something which, until then, had never really bothered the artist.

After that, Edwin decided to visit his old works of art, murals, portraits, statues and found that each and every one of them had been acredited to an unknown artist or source. A fact that hit Edwin hard. Nobody knew, not even his great love and person closest to him, Bellaluna, that he was a great artist and could produce masterpieces.

This sudden awareness of what the age-old curse had actually meant, set Edwin on a downward spiral of depression, drinking, and cynicism. And after a few decades of wallowing in his sorrows, he finally made his way back to Manta Carlos where he found the island had changed drastically from when he had last visited.

Realising then that MC was one of the last places he had been truly happy, Edwin decided to stay on the island, eventually getting a job at the school as an art teacher.


Resources: Edwin has money saved up as well as a nice stone mansion type house on the island. A house that actually he and Bellaluna had purchased, and still belonged to them.

You may now start roleplaying with your character. If your character has a business or organization, remember to post in the relevant forum and do claims for their business.

To get started with roleplaying, you can check out the Plots forum and reach out to other players, or see if you can fulfill any connections in the wanted ads forum. You can also find open threads (or post your own) on the open topic listing. Have fun!
Primary and Supporting Characters || Named NPCS