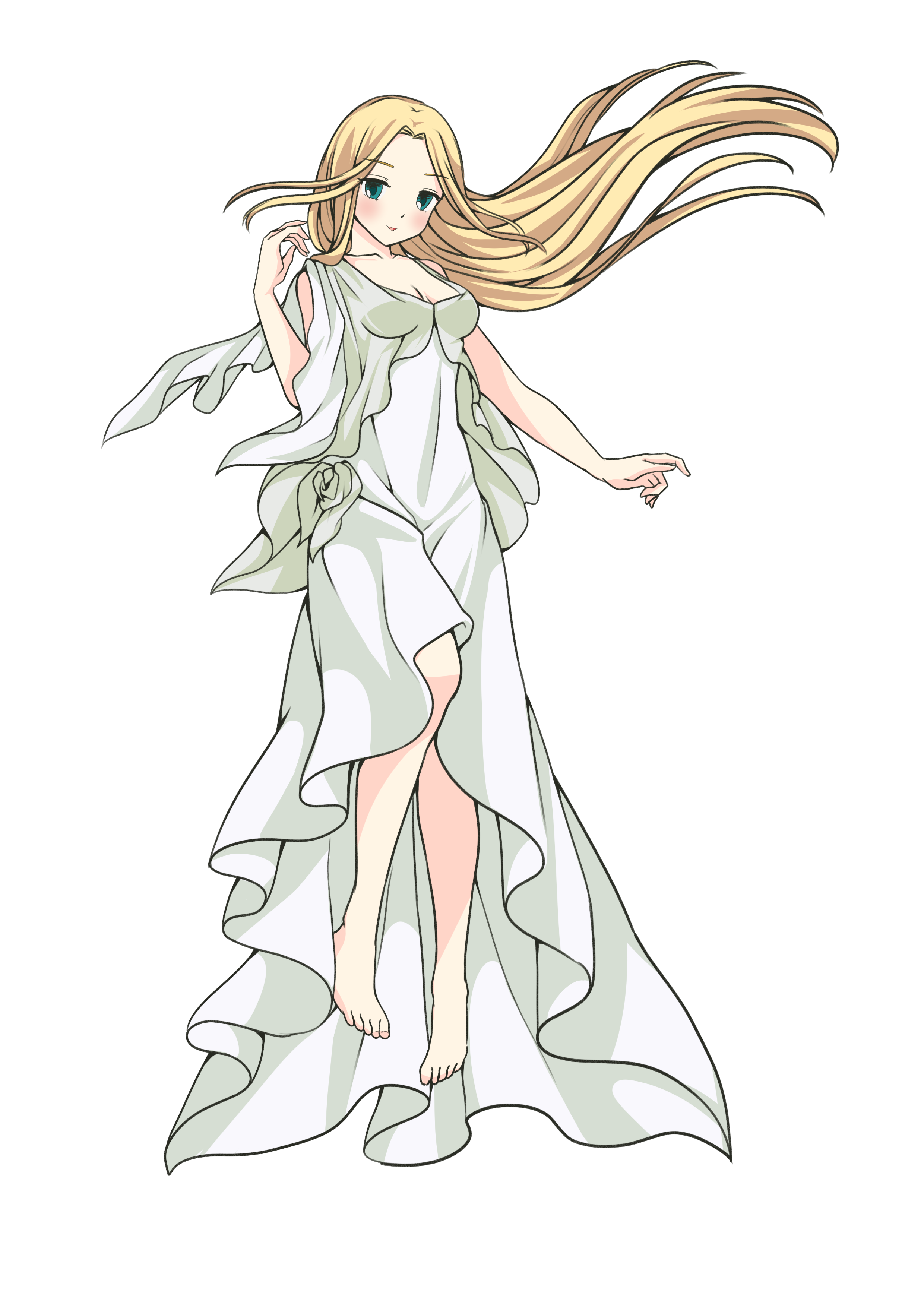 Commission done for me by: https://artistsnclients.com/people/Majolicha

Ecta has many forms, but only one that she can utilize to interact with three-dimensional beings. This form appears human at first glance, but has many unsettling differences that place her firmly within the Uncanny Valley upon closer inspection.

Her 'human' form resembles a young adult woman of a pale, slender build with straight blonde hair that falls very nearly to her ankles. This hair seems to consistently blow at a 121° angle to whichever direction the wind is blowing. Likewise, her unrealistically blue eyes seem to be segmented when viewed closely, and the sclera/Iris/pupil coloration is only for show. Most notably though, if one breaks her skin in any way, instead of blood and organs inside her body is a vast nebula that does not also match any known star system. She also does not walk, and seems instead to float or teleport places without the hem of her dress ever touching the ground. Whether or not she has feet or even legs is up for debate.

Her clothes are technically a part of her as well, though this is not obvious at a distance further than arm's length. She seems to prefer dresses that hang loosely from her body, giving her a flowy, almost ethereal appearance.

Personality Description:
Ecta is one who prizes knowledge above all else. She finds anything she does not know fascinating and will not grow bored learning about these things no matter how mundane they may seem. She loathes the notion of destroying knowledge and becomes morose or angry when she discovers that she is unable to learn of something due to its destruction.

Personal space is an issue that she does not seem to grasp. If the fancy strikes her to learn about it, she can and will even lick objects or people she wishes to learn about.

Like her general appearance, Ecta's emotional responses are slightly off. Most of the time she does not show enough emotion, but when in a situation where she sees others reacting with a particular emotion, she corrects. Or rather, she overcorrects. When she should laugh, she cackles incessantly and when she should be sad she weeps inconsolably. These swings in emotion leave as quickly as they onset.

Active Abilities:
Fourth Dimensional Movement - Ecta does not interact with the universe in the same way that most do. She perceived everything in four dimensions. She can move through solid objects as she wishes and moves along any axis she wishes, even vertically. In this way, she can fly or travel to any location more quickly than others since she does not have to interact with physical obstacles.

Fourth Dimensional Senses - Ecta can see across the fourth dimension, allowing her to perceived things in ways that no three dimensional being can within a one hundred foot area around her body. The easiest way of explaining it would be like looking down at a blueprint or a map from above and being able to see beyond a line (i.e. a wall) that the fewer dimensioned creatures cannot. In this way, Ecta can perceive anything and everything within her sphere, but nothing beyond it.

Consumptive Education - By ingesting any whole object, which does not harm her body to do, Ecta can begin processing it down into it's constituent parts and learn it's composition and how it works. In this way she could, for example, learn how to build a bicycle from scratch by ingesting a bicycle. This learning method does not work for more abstract knowledge, such as philosophy, art, or computer programming.

Passive Abilities:
Unknowable Mind - Ecta's mind is an unrecognizable starscape that is not easily navigated. Attempts to read her mind result in hearing and seeing nonsense patterns. Entering her mind is an even more dangerous prospect, and those who do might find themselves lost or irreparably insane.

Unknowable Anatomy - Ecta's anatomy does not work like anything anyone has seen. To this end, she effectively has no 'vital' organs that can be used to critically or lethally injure her. To kill her requires doing significant damage to over forty percent of her body.

Fourth Dimensional - Ecta is technically not on Earth. The form she uses to interact with third-dimensional beings is but an appendage. If this appendage is killed, it will disintegrate. It will take her time to reform a new body on Earth, minimum a week, because she does immediately recognize the loss of such a small part.

Eldritch Mind - Ecta's mind is vast and capable of understanding things that no three-dimensional being could even hope to comprehend. As such she cannot be rendered insane or harmed by such knowledge.

Weaknesses:
The Elder Sign - physical depictions of the Elder Sign disrupt Ecta's connection to her main body. When such a sign is visibly displayed to her she is effectively cut off, becoming human for the duration. On top of this, her form becomes weak and sickly, barely able to move until the symbol is removed. Closing her eyes once she has seen the symbol does not help, as she can still sense its presence once she had been made aware of it.

Biography:
Ectybr'ru has always existed since the end of non-existence. Her purpose has always been the cataloging and preservation of knowledge, in order to better understand the Dream of Azathoth.

During her eternity, she found herself embroiled with enmity with a different Outer Being, Altizica. Due to his unending hunger, he destroyed valuable knowledge that she had not yet been able to catalog. This provided within her a secondary purpose: determining if it was possible to extract the lost knowledge from Altizica and other beings like him, and doing so even if that course of action resulted in their destruction.

In this journey, she learned that Altizica came to reside on a planet called Earth, on an island known as Manta Carlos. She sought this place out, as such a concentration of occult knowledge and Altizica himself provided too much of a lure for Ecta.

Resources:
Lives in an apartment provided by the Manta Carlos government and lives on welfare assistance currently.

Additional Information:
This character application was made by @Kada for exclusive use by @Zora.
Last edited: Jul 7, 2019

Your character has been approved
Asta Ortega
Evie Everson
Natalie Kurono
Sareth Oranahr
Wednesday
You must log in or register to reply here.
Share:
Link