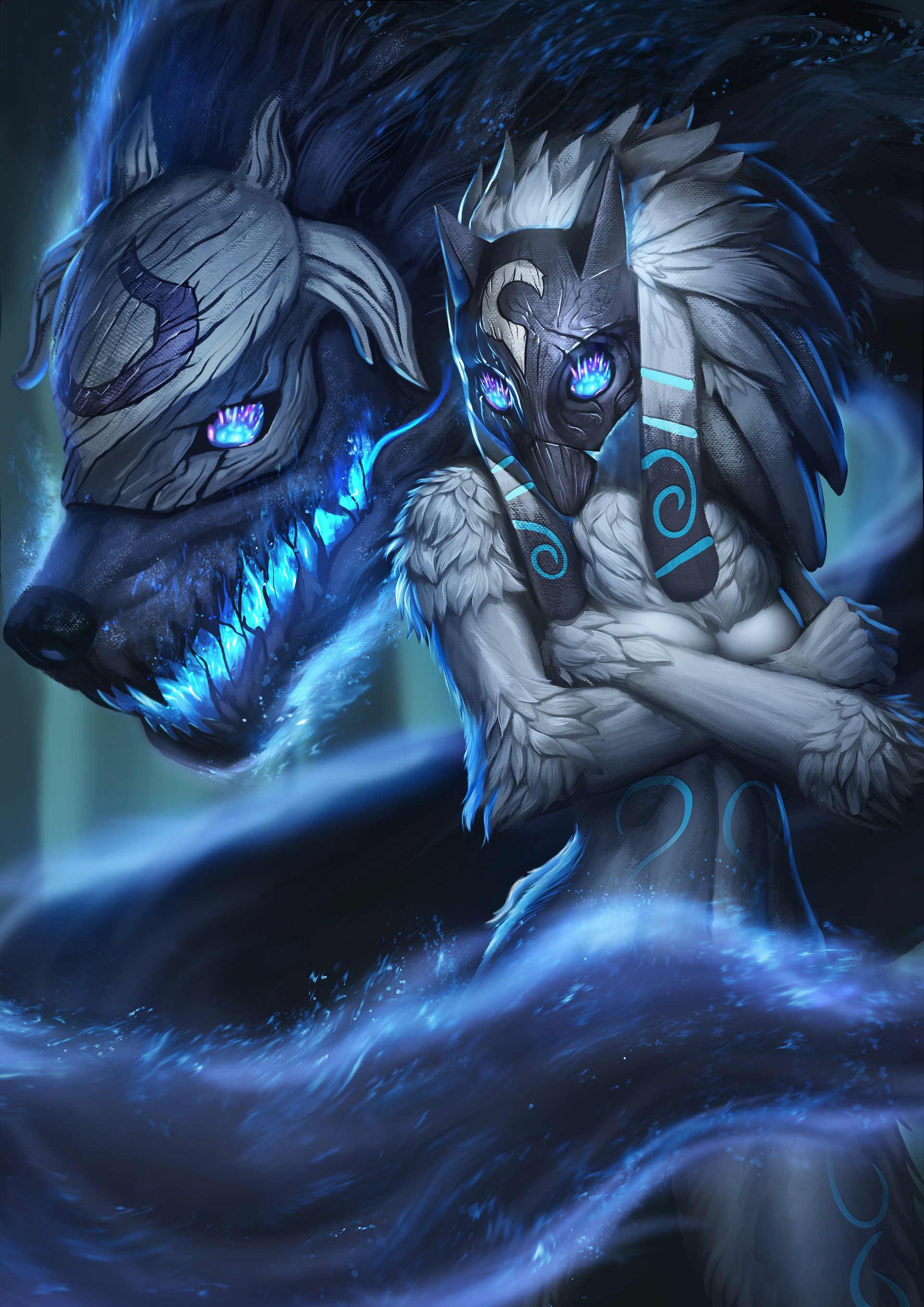 •She stands at 5'2 with a thin and agile build with some muscles. Snow white skin and hair, she has fur on her wrists, elbows and her lower legs, she usually wears minimum clothing but what she wears usually has fur integrated into it. Has sheep like hooves for feet, only has three fingers on each hand plus thumbs. Almost always wears a dark wooden mask, except when alone and with those she's close with. Face is round and human-like with glowing blue and purple eyes eyes and pure white hair. Has blue tattoos on various parts of her body. Has a scar across her throat that she keeps hidden with clothing.
•Stands at 6'2, large and muscular, covered in black-blue fur. Bipedal, standing on two strong legs, with two strong arms that have slashing claws. Jaws are filled with sharp fangs, always wear a white wooden mask unless alone or with someone he's close to, has glowing blue and purple eyes.

Corvian is an unusual individual. They come off as calm and very curious but also oddly innocent. They've had very little contact with modern society and the few instances of contact had been negative for them, despite this they'll often be found exploring and poking at new things to learn. Despite this curiosity they're slow to trust, with them quietly distrusting people until they've earned their trust. They have a deep love of nature and spends almost all their free time in the forest, though their curiosity does draw them to the city at times. They're a very affectionate person once you get through the trust issues, loving hugs and such. While their wolf form is biologically male they identify as female.

Because of their two very different forms, the humanoid wolf and lamb forms each form adds different aspects while the form is in use.
•Lamb: While in this form their innocence is much more apparent. They're a bit more skittish, less forward with what they want. They're still willing to defend themselves but lean more towards escape than direct fighting.
•Wolf: While in this form they're much more forward with themselves, more willing to poke at what they're curious about. They're also more fighty and will stand their ground when defending themselves.

•Cywirdeb: An enchanted bow, any damage to it self repairs in twenty-four hours. Arrows automatically appear in it as the user fires. It can be summoned as needed and will adjust in size to match it's wielder.
•Tywyll and Golau: Twin enchanted daggers, as strong as steel, with damage to it self repairing in twenty-four hours. Can be summoned as needed and will adjust size to match the size of the wielder.
•Shifting: They're able to shift between their female/sheep form and male/wolf form at will.
•Mask: A simple wooden mask that has some minor magic. It self repairs all damage sustained in twenty-fours hours, it changes size and color to match it's wearer, and can be summoned as needed.
•Animal Senses: Their sense of smell, sight and hearing are all enhanced. They can smell at the level of the best hunting animals, hear whispers and very quiet sounds and see perfectly in the dark. They have these senses in both forms.
•Wolf Form: This form is very durable and strong. It can lift two tons and can take a 9mm bullet with only bruising.
•Sheep Form: This form is very agile and fast. It can run thirty miles an hour and jump twenty feet.
•Eternal Life: They'll stop aging in their twenties and live forever unless killed.
•Iron: As with many fae they have a vulnerability to iron. It burns upon contact and disrupts all their abilities.
•Animal Manipulation: Since both forms have animal aspects they're always vulnerable to magics that manipulate animals. They always have about half the strength it would have on actual animals but they'll still be affected.

•Resides in the dorms, living on a school scholarship, receives an allowance.

•Corvian was born into a tribe of forest dwelling fae hidden within Wales. These fae lived deep within a forest, in a village hidden from man with magic. The community largely hunted and gathered to survive, with some trade from other fae and supernatural communities.
•So the young fae grew up among the innocence of nature, taking from nature what they and they're people needed and nothing more. It was a good and quiet life for them, unfortunately it wouldn't last.
•Corvian's father was the head of their tribe, in charge of relations with the other fae groups. Because of the nature of the fae courts this was often difficult, minor conflicts happened but peace was always restored.
•Then one of the fae tricked the courts, framing the tribe for cheating them in their trade deals. The court attacked the tribe and laid waste to the village. During the attack Corvian was confronted by the lying fae who cut her throat, and threw her into a river, but not before the liar told them what he'd done.
•Corvian survived, found by a friendly witch who healed their injuries but could not restore their voice. The witch cast a spell upon the young fae to a place where they could be safe. Corvian woke up in the forest of Manta Carlos, their memories blurry, no idea where they were.

•Image is Kindred from League of Legends by Chris Koh.
•They're omnivorous in both forms, eating both vegetables and meat.
•Because of damage to their throat they're mute and unable to speak.
•Knows how to read and write English.
Last edited: Apr 23, 2019

Notable Features: Sheep form has fur on her elbows, wrists, and legs, has sheep hover for feet, generally wears only small amounts of clothing, usually handmade, has several swirling blue tattoos.
Wolf form is large and covered in black fur, wears no clothing. Always wears a mask in both forms.

Abilities Summary: Can shift between wolf and sheep form. Wolf form has enhanced strength and endurance, sheep form has enhanced agility and speed. Has two enchanted daggers and a bow they can summon. Mask has minot enchantments allowing it to change size when they shift. Has enhanced senses. Weak to iron and animal manipulating magics.