Appearance Description: Almost always well dressed in high quality clothing. Red eyes and horns and tail that are colored with a black and orange striped pattern. His tail is actually soft, being covered in velvety fur. Orange hair swooping across his face with stripes or highlights of black hair. 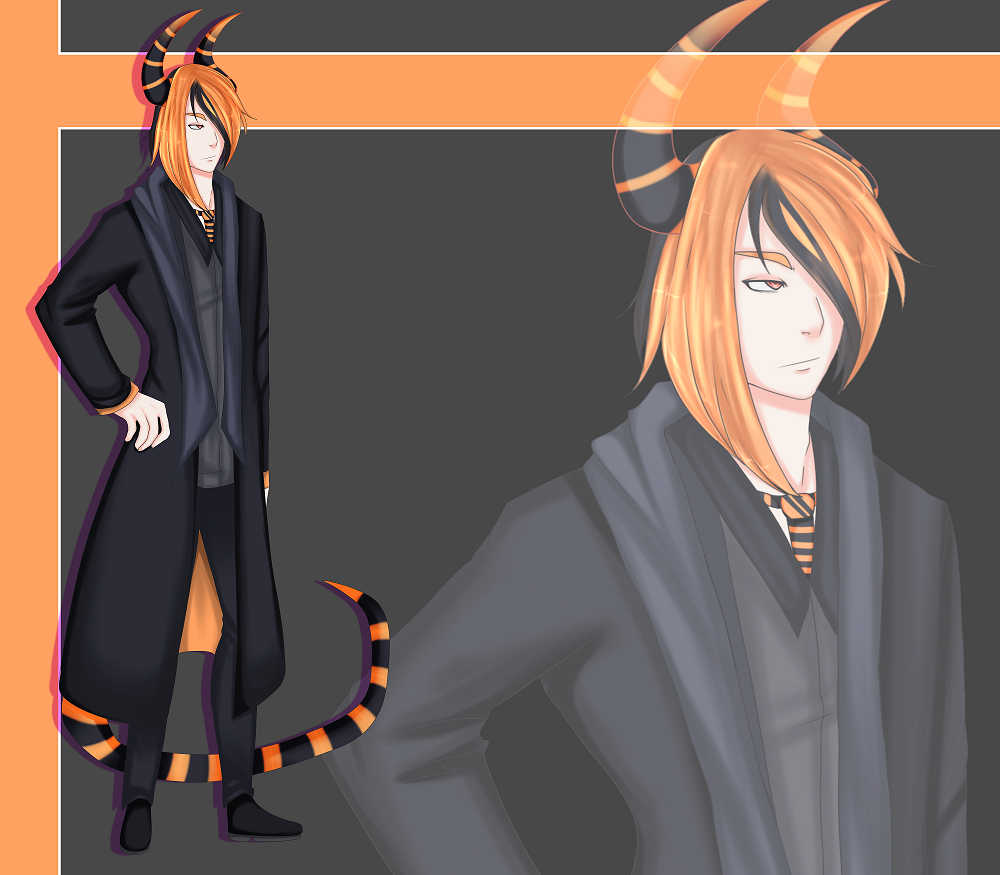 Art created by ViciousViking and adopted by me. I removed the color palette.

Personality Description: He's rich and has a bunch of fans of his work (even if many don't exactly know he's a demon) and it shows. He is very confident but he knows his capabilities and shortcomings well. He thinks extremely highly of himself and he's proud of his demonic heritage. His main drive in life is to be admired and loved for what he is and does.

Resources: Most of his considerable wealth comes from the estate and investments left to him by his mother and step father and from several well-received young adult novels. Lives in the Grovefire Manor in an upscale neighborhood of the city with a handful of well-paid housekeepers and other servants.

His two most successful books are part of the Moonfire Trilogy. Book one: Lunar Glow and Book Two: Radiance in Shadow. In them humanity has split into Terran and Lunar subspecies, with the Lunars developing magic and involves teen romance between them because of course it does.
Last edited: Jun 30, 2019 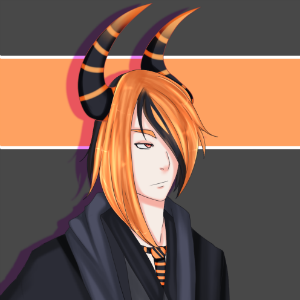 Physical Quirks: Generally keeps great posture. If he deliberately makes contact with his tail it means he likes you.

Abilities Summary: Immune to all mental/emotional manipulation effects. Only his name, species and age can be read by supernatural means. All other info is blocked. Attempts to read or influence him that get blocked instead just cause a person to feel inferior to him. Physicality is always better than his foes. Summonable handgun. Weak to holy water. Removing his tail can paralyze/kill him.

Reputation: Very wealthy. Owns the Grovefire Manor in the rich area of the city. Had written several popular fantasy novels for young adults. Was off island in the narrow reality but recently returned. Demons seeking aid are usually welcome at Grovefire.

Misc Information: "Henri Kivelä" is Colten's Finnish human alias that he writes under for the narrow reality
Fluent in English, Finnish, French, Spanish, Italian and demonic languages
Art created by ViciousViking and adopted by me. I removed the color palette.

His two most successful books are part of the Moonfire Trilogy. Book one: Lunar Glow and Book Two: Radiance in Shadow.
Last edited: Jan 2, 2019

Deleted the CMI section and the now-defunct human shape charm
Click to expand...