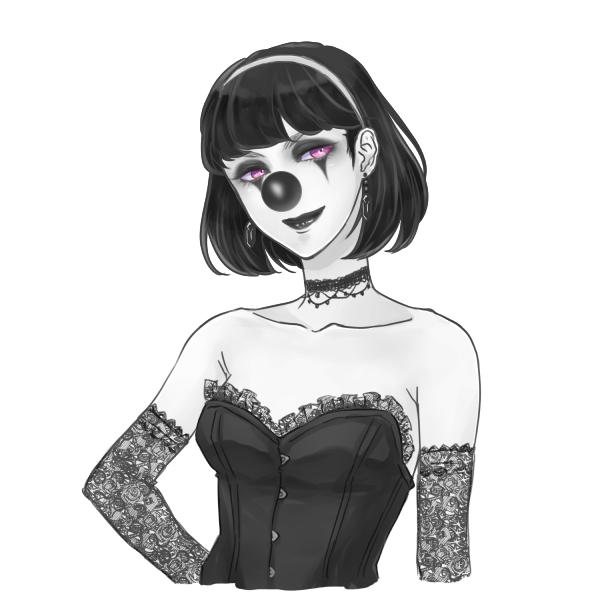 Image made using this Maker by はち夫 on Twitter.

Chiffon looks in many ways like a girl in grayscale. Her skin is porcelain white and her hair is coal black, and her taste in clothes tends to match this aesthetic. One could almost call her gothic, but her clothes bear the lightest hints of whimsy in them. She stands at a fairly average 5'7" tall with a lithe, slightly pear-shaped build. Oh and her face has permanent black markings akin to clown makeup, and her nose is large and round like a ball, and shiny black. If her nose is squeezed, it makes a sound like an old time car horn. The only thing colorful about her are her bright, almost neon pink eyes.
personality
Chiffon wouldn't call herself jaded so much as she would call herself a realist. She realized long ago, due to how she was treated back home, that all life's a joke. But it's one that gets a subdued, breathy chuckle rather than the raucous laughter the Clowns in the government want. Or the Clowns behind the cash register, for that matter. She's used to keeping up walls to keep herself from getting hurt, but she's taking her time away from home to try and expand her horizons.
abilities
Active
Rubber Hose
Chiffon's body is much like rubber. She can stretch herself out to about five times her normal length or compress herself to a third of her usual size. She can inflate herself like a balloon or deflate to become flat. Her body can twist and bend in and direction, ignoring her skeletal structure entirely. In any way she contorts, she maintains full control over her body and can still move perfectly well. This has the added benefit of making her effectively immune to blunt force trauma. She is still susceptible to other forms of harm however. Chiffon cannot maintain any stretch or major contortion on her own for more than a minute or so, but can remain stretched if she is held that way. Once released, she snaps back to her usual shape like a rubber band.

A Bicycle Built for Two
Chiffon is not a very good Mime. All she can actually manage to perform is an invisible bicycle that she summons by miming getting on it. This functions as a normal bicycle, but can accommodate a second rider if she wants.

Passive
Don't Touch the Nose
Chiffon's nose, when squeezed, makes a noise like an old time car horn. While not incredibly loud, it is still fairly alarming if one isn't expecting it.


biography
Chiffon is the result of an affair between an artisanal juggling pin carver and a displaced Mime living in New Perriot City. The monochrome clown child was unwanted, and so ended up bounced around the foster care system until she could fend for herself. From there it was a life of working jobs no one else wanted, and no matter how funny she might have been, no one wanted to laugh for a colorless clown.

When the city started the initiative to send citizens over to Manta Carlos to bridge the gap between the two worlds, someone in the mayor's office had the brilliant idea to send a few undesirables along with more upstanding citizens. Clowns that no one would miss if they never came back. Clowns like Chiffon, who made their beautiful city a little less vibrant.

Chiffon wasn't incredibly jazzed to be sent away like that, but she also didn't have much of a choice. So she packed up her things, hopped on her invisible bike, and headed out. Now that she's here, she realizes that she's probably better off anyway.
Resources
Currently living on government assistance, including her housing.
additional info
Part of Batty's Clown World.
Last edited: Sep 12, 2019
Primary and Supporting Characters || Named NPCS

Physical Quirks: Nose sounds like an old time 'awooga' car horn if squeezed. Generally looks mildly amused. Usually has a candy stick of some kind in her mouth/hands.

Abilities Summary: Can stretch/contort/inflate/deflate like a rubber cartoon character, with limits. Can 'Mime' an invisible bicycle that can accommodate a passenger. Her nose honks like a car horn when squeezed.

Reputation: Well, she's a goth clown so probably some folks think she's creepy. Otherwise she's fairly new and hasn't made a name for herself yet.

Misc Information: ICC image made using this Maker by はち夫 on Twitter.