Well, I didn't tell anyone, but a bird flew by
Saw what I'd done, he set up a nest outside
And he sang about what I'd become

That was how Shay found one of the patients on Saturday. Beneath a pool of their own blood, that delirious look in their eye that came from a loss of worldly sensations.

It was lucky Shay's quick-wit came when it was time to protect them, rather than murder them. Who would have thunk it? Her, a savior. Some weird anti-fucking-hero put here in the first place for covering up a murder. Self-defense. Sure.

She'd stripped off her shirt, panic drowning her while she pushed it down on the wounds. There was already so much blood, and she screamed bloody murder until guards came to help the poor sod.

Watching him get wheeled off to the infirmary, his blood coating her. It was a terribly cold feeling.

It was the kind of moment that looking back one day and writing a memoir; Shay would say it changed the course of her life. It didn't right then, or even on Tuesday when Shay went to visit the face without a name, but it would later.

They had him strapped down by the arms on the bed, his wrists freshly sewn up and bandaged. Shay was sure beneath the sterile white cloth the wounds must have looked red and angry, even with a good stitching job.

"Hey," she said, once she realized he was awake.
@Kadakism 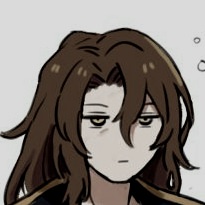 Hella stared blankly up at the ceiling in the medical ward of the correctional facility. Her arm throbbed, not so much because of the pain but because of the reminder of what she had done. Or rather failed to do. She had told everyone. She would rather die than look like this again. And now she was stuck. She was free from Ebonyridge. She could feel it. But stuck.

A voice broke her introspection. Her eyes traveled over to the visitor. She didn't recognize her, not at first. Oh wait, she was the one who sometimes ate dinner with the Drakenhardts. Something that started with an S.
She tried to speak, her voice coming out as a harsh growl at first. She coughed and tried again, straining to lilt her voice upwards.

Welp. Shay was somewhat used to getting yelled at, and maybe it was a good start to have someone she didn't know yell at her. Obviously, this person didn't remember that she was the one who'd stopped them from bleeding out.

Suicide wasn't illegal on the island, but it seemed they took a special care with patients.

She pointed to herself before grabbing a chair, scooting it close, and plopping down in it. "I'm the one who stopped you from bleeding out," she told him. "I'm Shay."
@Kadakism

Shay. That was her name. And Shay didn't recognize her? It took Hella a second to realize that of course she didn't. She looked nothing like how she looked back the few times they had casually met

Tears welled up in Hella's eyes and it took all of her strength not to break out bawling right there. "I-I know you... you're friends with Kenrick, right?"

She squeezed her eyes shut tight. Don't cry, she repeated over and over in her head. Don't. Cry. Finally she managed to mumble, "I'm Hella. Virgil's g-girlfr..."
She trailed off. What would Virgil think of her now? She was hideous, inside and out.

"Yeah," Shay said, voice still gentle. She knew that scrunched up face look, the tension in someone's body when they fought off tears. Shay was dealing with a lot of tears lately.

She looked around, but they were basically alone. Or as alone as someone here could be. She leaned forward a bit and put her hand on the edge of the bed.

"Hey," she said to draw Hella's attention to her, "it's gonna be alright."

She remembered the name. This was a very different Hella, but that didn't slow Shay down. Someone was crying, and they had tried to kill themselves not three days ago. Her mouth was dry.

"Why did you do it Hella?" Maybe not the question most people would have gone with, but seeing as Hella was in no immediate danger of herself anymore and she didn't so much seem spitting angry as sobbing sad, Shay figured it was a good metaphorical jumping off point.

She undid the straps that held Hella down by the arms.
@Kadakism

Why? Hella felt her face screw up into some mixture of a scowl and a frown. There was no holding back the floodgates now . She began to sob.

"I hate looking like this. I'd rather be dead..." She recoiled from the hand on her arm, the touch making the throbbing under her bandages flare up.

"Hey, woah. Don't pull back; I'm just trying to take off the restraints," Shay said, pulling her hand back and waiting for Hella to calm down before she went to work on them again.

She listened to the other girl as she cried and spoke through the tears. Shay didn't understand the way someone else with a similar problem could have, and this might have been the first time she truly felt out of her league when it came to any sort of advice giving.

Maybe there was nothing to be said about it.

"It's a pretty fixable thing, Hella," she said gently. "I guess you weren't using a charm before? But there are other types of magic to help with your appearance."
@Kadakism

Her tears streamed down her contorted face. Ugly crying was one of those things that Hella had always been chided for by her father. It was unbecoming of a man to show such emotion. She let out a bitter laugh that got mangled by her tears. "No, no charm. But it's still fake isn't it?" she admitted her feelings. Nothing, not even magic could make her what she really was underneath.

"Da was right..." the words hurt to say, and deep down she didn't really believe them. But saying them and hurting felt good in a way. Giving up felt good.
"I'm not really a girl and nothing can... change that."

"Sounds like a great guy," Shay said, words seeped in sarcasm. Hella was distracted enough that Shay managed to unbuckle her from the straps that held her to the bed. There, it should feel more comfortable for her.

"Look, just because you don't look like something doesn't make you not that thing." Shay tried to come up with a better way to explain it. "Magic is just belief anyway. Manifested into actual form. When your hit with a fireball, that's real right? So why would you be less real?"

Shay stood and looked around the room until she could come up with some tissues, a small trash can, and a glass of water to bring back to Hella's bedside.

"Ain't no reason to go giving up yet. You're way too pretty to die young, anyway."
@Kadakism

Hella couldn't form an argument against Shay so she just shrugged and turned her face away. She didn't know what was real or fake anymore and she didn't want to think about it too hard.

"I'm not pretty. I'm handsome. And I hate it more than anything. I enslaved myself to fucking Elves to be pretty. I let them..."
There was a laundry list of terrible things that they had done to her on her most recent trips to Ebonyridge. Hella tensed up at the thought of it.