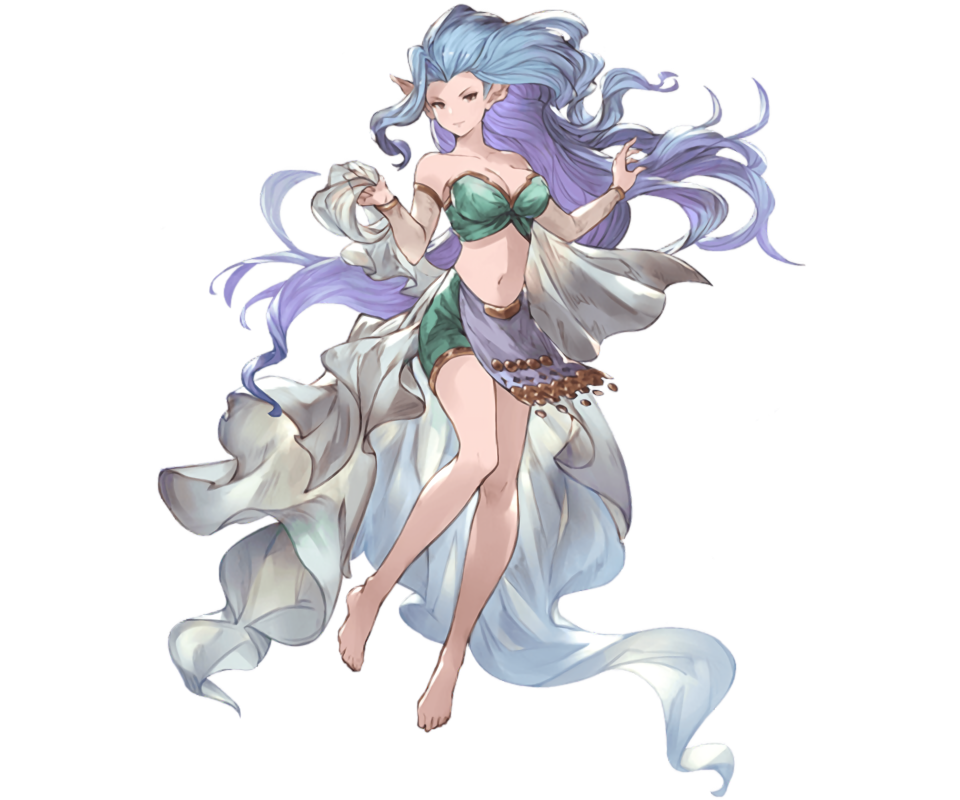 Character is Tiamat from GranBlue Fantasy. The artwork is official.

Azlin's species resemble humans in many respects and she is no different. She stands at an average 5'4" tall with a slender, dancer-like build and pale skin. Here the aesthetic similarities tend to stop however. Her ears are long, coming to broad points several inches from the sides of her head. Her ears have small ridges along their lower side, giving an almost fin-like appearance. Her hair, which is long and voluminous, is a bright silver-blue color and seems to undulate gently even with no wind present.

She dresses simply, often preferring the simple spun clothes that she wore on CES-V-13. She also tends to carry a large sheet-like robe around to better cover herself in harsher weather. Her shoes of choice, when she chooses to wear them at all, are similarly simple sandals.

Azlin is a product of the world she was born on, one where death is the least punishment for showing too much weakness. Things such as compassion and genuine affection are commodities, and as such they cannot be given out freely. Playing hard to get and being charmingly stand-offish are much more finessable weapons.

That isn't to say that Azlin isn't personable or friendly. She can very easily ingratiate herself to others, make herself seem useful or generally good to keep around. This was how she survived on CES-V-13 for so long; finding powerful individuals and making herself available to them as a valued resource. A treasure to be protected and kept.

She has a number of walls built up around herself to protect her from the harm of others. There are ways through these walls, but getting there can be a difficult task and until you break through you'll never really know. To those she opens up to, she tends to be much more vulnerable and loyal to.

Points of Contact
Azlin's people can create psychic links between themselves and other people in proximity to them. She can create, at most, a dozen such links and can stack multiple links on a single person.

To create a link, Azlin must be in proximity to the person. Creating a link without physical contact takes upwards of an hour while skin to skin contact drastically reduces this time to ten minutes. Subsequent links on an already linked individual take half this initial time.

If she has reached her maximum limit of links, she must first break one to make another. Breaking a link requires the same proximity but no more than a minute.

Once a person is linked to Azlin, when in their presence she can adjust their perception of the world around them. With a single link, this can do things like subtly shift the perceived tone that another person's words have to the subject. If a subject has ten or more links attached to them, Azlin can create full sensory effects including perfect visual, auditory, and tactile illusions.

Picture of Passivity
Azlin's species are shapeshifters by nature, but their ability to shift is neither dramatic nor conscious. Their features shift in response to general psychic feedback around them; changing in small ways to appear in a way that causes others to see them as more approachable and trustworthy.

This effect is slightly more dramatic when Azlin is alone with another person. The more people there are nearby, the more subtle and diffused the effect is as it is being filtered through many different people.

Mind Shielded
Due to her species' nature, Azlin finds that she is highly resistant to effects that alter her behavior and perception. Stronger abilities can still affect her, but she will be distinctly aware of where the influence is coming from to allow her to try and escape it.

Biography:
CES-V-13 is Azlin's Homeworld, but it was not her parents'. They were part of the ruling class of their home planet, a kingdom built on subterfuge and illusion.

But as the populace of the lower classes grew and became increasingly dissatisfied with their position, it became harder and harder for Azlin's people to maintain their grip. A revolt broke out leading to a civil war of unprecedented size. When the dust settled and the last bodies dropped, cooler heads prevailed.

Or more accurately, cooler heads influenced by the remnants of the psychic race prevailed. Exile instead of execution. Only too late did they realize that the alliances their former servant class had made gave a uniquely cruel option for said exile. Planet CES-V-13.

Azlin was born on this hell world, a child being punished for her parents' and her peoples' misdeeds. She grew up detached from the lost lost glory that her parents remembered. From a young age she learned to ingratiate herself to those stronger than her. Survive by putting the biggest, strongest musclebound idiot between her and the hordes of crazed madmen and killers.

Her life seemed to be on a set trajectory to become the wife of some clan leader and live in relative apocalyptic luxury until she died. Until she got swept up with a group of clanless individuals who were dead set on leaving their prison or die trying.

She didn't think they could make it, but anything was better than this. Over the long time it took the crew to refurbish their ship and get supplies, she found that she actually kind of liked these people. They were genuinely kind to her, in their own ways.

Their ship got hired to return an abducted human to Earth, so they made their way there before being stopped at Starlight Observation Station.

Resources:
Has her own room on the Catch-22 as well as whatever supplies the ship itself has on it.

Additional Information:
This character application was made by @Kada for exclusive use by @Zora.
Last edited by a moderator: Sep 24, 2019

Notable Features:
Her ears are long and have a fin-like appearance. Her hair, which is long and voluminous, is a bright silver-blue color and appears to undulate gently even with no wind present. She dresses simply in robes and sandals.

Abilities Summary: Azlin can create psychic links with people near her. She is also a kind of shapeshifter. Her features basically shift in small ways to appear more approachable and trustworthy based on how each person sees her. Finally, she is highly resistant to any effects (i.e. auras or similar) that alter her behavior and perception.

Reputation: None. She s new to the island.

Misc Information: She was born on the prison planet and has escaped along with Camibrissa, Nero, Xeros, and Ianthe. (Will add more later as plot progresses)