Private Finished Art There And There, Art Everywhere 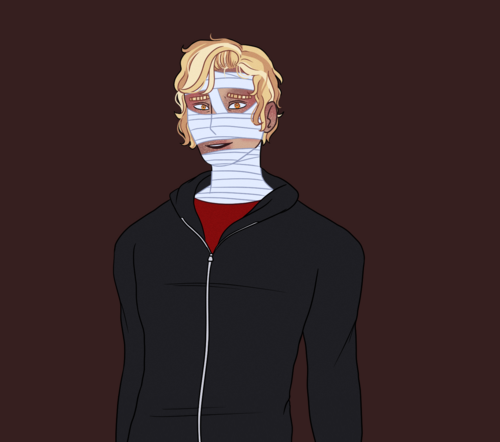 "Yeah," he'd grin "swapping sounds great." It was the perfect way to end their painting experiment. "Let's get pictures of them too."

He'd watch her. "What are you doing?" then of course his odd demon friend pressed her face against the canvas. He'd laugh a little, "that going to be the way you sign your work?"

Rowan would grab a rag and get it damp, bringing it to her once she'd finished. "Now, its official a Mal painting," he'd say with a smile.

"I wanted another way to make it permanent." She replied with a laugh, pulling out her phone again to take a picture of her work. In the end it was... well, it wasn't totally clear what it was meant to be, but the canvas had a multicoloured imprint of her face surrounded by a rainbow of different figures in a ring.​
​
What she'd actually made was what she wanted.​
​
She took the rag and thanked him, starting to wipe off the paint on her face but missing a good amount without a mirror.​

Chuckling he'd take the rag, gently wiping off the paint she'd miss. "Well, it looks beautiful, you did right good," he was honestly really surprised at how much fun this had been.

He'd try wiping the paint from his own face, like Mal he missed quite a bit. "So.....I'd been doing a lot of thinking," he'd clear his throat, "about my situation....and the options I have."

She took a deep breath at that. She wasn't expecting it now, but... well, she was happy that he decided to trust her enough to do it and that he didn't go to someone less safe. She gave him a thumbs up and, in a puff of flame, she was holding a parchment contract and a pen.​
​
"So, I've been working on something for this and I think I know what to do." She said, holding the lease out to him as she explained it. "Uh, feel free to read it over yourself just to make sure, but the idea is that the magic keeps on working indefinitely to heal you over a course of about two years working on the assumption that you spend at least four hours a week hanging out with me. It'll go a little faster if it's more than that, but not by too much."​

He'd take the parchment, reading it over. "I mean....I like spending time with you," he'd say with a smile, "and...you've shown you can be trusted." It was still a big thing he supposed, signing a magic contract, even if it was with a friend.

"Thank you Mal," he'd take the pen, taking a breath he'd he'd press its tip against the paper, the contract didn't seem like that. In a flash the parchment pulled itself from his hands, and by and an invisible force, it'd rip in half.

"W-what was that?" he'd ask, dropping the pen and looking confused and incredibly worried.

Malicia stared at the torn contract. She knew what that meant. Unfulfillable. There was no way it was unfulfillable, she had exhausted every option short of... no. She would never let herself do that. Not even in this situation.​
​
"It.. Rowan, I-" She didn't know what to say. She had told him she could help him...​
​
"It means that... it means that contract can't be fulfilled." She reached down to pick up one half of the paper, but as soon as she touched it she reeled back and scrambled across the floor, genuine fear on her face.​

"Are you hurt?" he'd glance back at the torn contract.

"Did...did you see something?" she looked scared, but he didn't see anything, just the failed contract.

She shook her head, still looking scared and grabbing his sleeve again for reassurance as she explained herself. "I didn't see anything, b-but I know what's wrong. The thing that's attached to your soul... it... it doesn't want me to help."​

He'd half sit, half collapse there, taking big breaths as he tried to calm him. "Fuck....," he'd breath out as the panic attack stated to pass.

She shook her head, keeping her grip on his sleeve as she looked up at him, her one eye wide. "It's not too late. It can't be. There has to be something we can do."​
​
She couldn't lose him. He was the closest friend she had up here and he helped her feel like she could actually belong. She wasn't going to just let some monster seal his fate while she still had the ability to try and act. No matter how dangerous it was to try, she was going to save Rowan.​
​
"I'll help you. I promise I'll help you."​
You must log in or register to reply here.
Share:
Link
Top Bottom