Many thanks to @Emy for commissioning this for me from Ryno Chalklut on Deviantart
Auburn hair and bright green eyes. Two small stubby black horns peek their way out of her hair on top of her head. She dresses casually in jeans mostly though she prefers to wear an open black jacket with pockets sewn into the interior. She's just as happy displaying her bright green halo as not, though generally it is hidden just for ease's sake. It can be worn above her head or around one of her wrists though it has no actual function.


Personality Description: Aria is very much content with her life. She's confident in social situations though she prefers not to take the spotlight. She likes to go with the flow in any situation. She sees no real reason to lie about most things- she's the kind of person who will tell you exactly how you look in that outfit because there's no reason to lie. In fact people that lie a lot bother her. She's warm and friendly towards new people but she absolutely relishes close connections with people she becomes more familiar with. She won't stand for someone being an ass to a person she cares about but she prefers to help them get out of the situation rather than start a fight if she can help it.

Biography:
Arianell is one of the regalia. A species of guardian spirits that live on a plane separate but near to the normal world. She was born when her parents, Brynn and Sian, decided they wanted a third child. They were moderately wealthy and lived in the home plane of the regalia. Her older brother Rhett and sister Addiena (Addie) were twins and they were just entering their teenage years when baby Aria was born. She was not overly spoiled by her parents and siblings but she was also well taken care of. Many of her things were hand me downs from her sister but they were well kept and she saw it as a connection to her sister instead of living in her shadow.

As a child she would follow her siblings around and try to join in with anything they were doing. Naturally they grew tired of this but every time they tried to make up an excuse to send her away she called them out on their dishonesty. Eventually they broke down and said she was bothering them by always following them around. That upset her greatly and she cried for hours in her room before it went quiet. When her parents checked in on her she was gone. She had accidentally opened a portal to her own private pocket dimension and crawled inside. It was dark and though she could see it was featureless. But it felt like it was hers. She started to be worried she was trapped but then she reached out and traced her finger in the air, opening up a portal back to her room. Her parents were distraught but so happy to see her home and safe.

With more practice Aria's abilities to create portals between locations and dimensional spaces increased. Meanwhile she became old enough to go to school and being surrounded by other people her own age was glorious. She was never the star of anything or the one in the spotlight but she quickly realized that wasn't what she wanted to be anyways. She made friends easily, but the people who lied or were dishonest bothered her. It made her very careful about who she allowed to become very close with her.

It was as she was just entering her teenage years that she began to realize that while boys could be hot and physically attractive sometimes, she didn't feel quite the way many of her friends did about them. No, she found herself being drawn to other girls instead. Her first kiss was with the girl she had been friends with since the first day of school. They sort of dated for a month or so, but it was never really meant to be and they drifted apart eventually. She had a few more relationships with varying lengths but most of them ended amicably.

When she was about the human highschool age mentally and physically she wanted to try going elsewhere to study. Many of the regalia were aware of the human world, with a portion of them living on the Island of Manta Carlos and travelling back and forth frequently. After a long series of discussions her parents allowed her to seek enrollment at Starlight Academy. She joined the academy for her freshman year of highschool and since then she has lived on the island, travelling home to visit or for vacations as she wished. Her portal abilities made that particularly easy.

While going through school she found herself very interested in how the MCPD handled incidents and treated people of all kinds. Their goal was to protect people and help those who broke the law get rehabilitation rather than just punish them. She felt she could do that job very well and when the opportunity to sign up for the Junior Police Cadet program came up after her sophomore year, she took it.

Aria graduated highscool with a solid B average and fortunately became the equivalent of 18 in time to enroll as a Police Cadet. Her parents were extremely proud.

Once the Game of Divine Right began she was found by KirMir and decided she wanted to learn more about them. With more and more time she decided that though they were not great at socializing they were actually pretty nice once you got to know them.

Aria has graduated from the MCPD Academy and is now on the streets for her field training.

Resources: Lives in a small apartment. Receives a salary from the government for being a police officer. Has access to her parents if she really needs help for larger expenditures but is mostly self-sufficient.

Additional Information: Pacted with KirMir in the Game of Divine Right
Her special emerald bracelet (manifestation) is locked safely in her apartment or kept on her wrist.
Likes cooking, not the greatest at it
Last edited: Aug 18, 2019 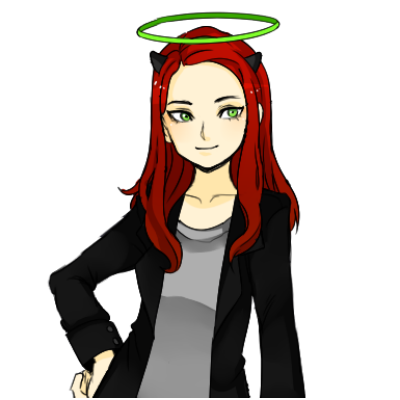 Notable Features: Auburn hair, two small dull black horns, sometimes has a bright green halo floating above her head or around one of her wrists. Usually prefers to wear at least a light jacket if the weather permits and she's not in uniform.

Physical Quirks: She's usually fairly calm, but if she starts keeping one hand in her jacket pocket you'll know she's feeling uneasy. Absently rubs at her horns. Tends to look very unhappy when people repeatedly lie to her.

Abilities Summary: Creates portals, has access to a pocket dimension. Can see in the dark and sees a hazy outline when someone would otherwise be unseen/invisible or has their appearance altered. Has a gut feeling when people are trying to mislead or hide things from her. Omnilingual

Misc Information: Regalia Bonded and friends with KirMir.
Many thanks to @Emy for commissioning this for me from Ryno Chalklut on Deviantart
Last edited: Aug 18, 2019

Arianell was always omnilingual and didn't need to eat. To say otherwise is treason. Treason is punishable by death.
Primary and Supporting Characters || Named NPCS