Angelo, for the most part, looks like an average Caucasian teenage boy. He has short, scruffy blond hair, bright blue eyes, and a relatively muscular build. He stands at 5'11" and wears relatively casual clothes when not in his school uniform. The most obvious physical feature, however, are his left side and left arm.

Angelo's left arm has been replaced with a robotic prosthetic. It's made primarily of grey metal, with patches of black and grey showing beneath the creases. The arm has a fully functioning sense of touch. Large portions of the left side of his body have been replaced with a silvery material. Unlike his more robotic looking arm, this appears to be almost natural looking, the silver meshing nicely with his flesh rather than protruding. The patches are most heavy around his shoulder and down his side, and run down to his hip and up to his cheek, with a few patches visible on his face and neck.

PERSONALITY
Angelo is a boyscout by most possible meanings. He's a good guy at heart who desperately wants to help people, who does his best to always come prepared. He has a tendency to insert himself into others problems with the best of intentions, whether for better or worse. It's a problem he's aware of, and one he's trying to work on.

He has a tendency to idolize authority figures, placing them on a pedestal and doing his best to follow instructions. He tends to trust teachers, cops, and similar as a matter of instinct, and seeks to impress them where he can.

After going through so many awful situations, Angelo has a high tolerance for trauma. Not only is his physical pain tolerance fairly high, but he's seen enough death and destruction to last a lifetime. In a serious, life-or-death situation, he's learned to turn his emotions off, get through the situation, and handle it all later. He's excellent at compartmentalizing, at coming up with plans on the fly in situations where most people are curled up in the fetal position, and since it's practice more than a natural part of who he is, he allows himself to feel proud of it.

Because Angelo is naturally a proud person. He was raised to recognize his own self worth, and he's never one to downplay his own qualities. He expects a lot from both himself and others, and often has to remind himself that not everyone grew up in the same position he did. He's had plenty of advantages, and at times it can be hard to put himself in other people's heads.

Angelo is not a natural genius, being slightly above average at best. However, his experiences and powers have pushed him beyond what is generally possible for a human, and left him with a significant edge over most people. He has a perfect memory, which lets him remember everyone, and he finds it difficult to forgive and forget.

No doubt as a part of this, Angelo absolutely hates being talked down to. He recognizes that he's only a teenager, but is also very aware of his own experiences. Few things enrage him faster than someone treating him like a child, or acting like he couldn't possibly understand something. It's one of the fastest ways to earn his anger. And while Angelo is slow to anger, he has that cold, vicious sort of anger when he finally is.

Angelo is friendly to the majority of people, but tends to keep a small social circle of close friends. He's exceptionally loyal to those he considers his true friends, and he does what he can to stay close to them after losing people in the past.
ACTIVE ABILITIES
Suit Up: Angelo's superhero outfit was built to last, and it covers everything on his body from below the bridge on his nose. It's made of a special carbon-fiber nanoweave, and extremely durable, unable to be cut by a normal knife and capable of withstanding non-supernatural strength. Small caliber bullets will bruise but not penetrate, and the suit is generally resistant to the elements. It'll stand up better than it should to fire, ice, electricity, etc.

Gun Creation: Angelo is capable of instantly summoning a replica of any gun he's ever touched. These guns operate like their normal counterparts, minus any magical effects, but Angelo only needs to mime the motions of reloading in order to reload them properly. When dropped or otherwise separated from Angelo, the guns dissolve almost immediately. Bullets take about thirty seconds to dissolve.

Angelo is capable of imbuing his ammunition with different effects. These effects replace the normal effects of bullets. Currently, Angelo has access to four possible options:
Efficiency: Angelo is capable of performing mastered actions nearly instantly. To master an action, he needs to have performed the action at least once a day for ten days in an identical manner. This action also allows him to speed-read, absorbing all knowledge just by flipping through the book.

Memory Tampering: Angelo is capable of adjusting the memories of himself or other willing participants. He can erase, create, or adjust memories freely. He requires physical contact to do this, and doing so requires several minutes.

Dimensional Storage: Angelo is capable of opening a portal into a pocket dimension, which he can use for item storage. The portal entrance is three feet square, and no living matter can pass through the portal. The actual internal dimensions of the portal are quite large, but Jude only has access to what he can reach.

Enchanting: Angelo is capable of imbuing magical effects onto existing items. The more complex and powerful an effect, the more difficult it is to produce. Permanence is also a factor; Temporary effects are easier to produce than permanent ones. Even a simple, temporary effect takes at least an hour to produce, and doing so is tiring.
PASSIVE ABILITIES
More Than Human: Angelo is always the picture of health, and is completely immune to non-magical illnesses or disease. He does not require sleep, and does not become exhausted by normal physical exertion. His vision is as good as a hawks, and his memory is perfect, with instant recall. Portions of his left side have been replaced with an unearthly metal, making him more durable where the patches are. This metal extends inside his body, is supernatural in nature, and takes the place of portion of his internal organs and bones. These replacements act like what they replace, and are not disabled by anti-magic effects.

Son of Adraxis: Angelo is passively immune to auras that tamper with his emotional state.

Robotic Arm: The majority of Angelo's left arm has been replaced with a robotic prosthetic. The prosthetic has a fully functioning sense of touch, and is considerably more durable then a human arm has any right to be. The arm weighs about the same as a normal arm, and can be tuned to adjust the sizing of the synthetic muscles to match the rest of Jude's body.

I Know All About It: Angelo possesses an extra sense which is directly tuned to information. When someone is within 30 feet of him, he instinctively knows their name (whatever they consider their 'true name'), species, and any powers, weaknesses, or other supernatural capabilities they posses. This does not detect items or magical effects that are currently being applied to them by an outside force.

RESOURCES
Angelo lives with his father, Basilio Genovese, in a small apartment. Angelo has some personal savings from his work at La Bussola, but generally they're on a tight budget as the restaurant gets off the ground.
EXTRA INFO
Angelo finishes his scout training on November 19th.

Compass of First Frost: A small compass with a snowflake motif. The compass always points to the place you'd consider your primary residence. This compass only works for its owner.

Bracelets of First Love: A pair of plain golden bracelets. Touching one bracelet while worn makes the other bracelet feel the touch. These bracelets resize to fit the wearer. Alma has the other half.

March's Gift: A small houseplant, whose flowers bloom a small piece of paper each day. Each paper has a unique riddle on it for you to solve.

Art Credits: Angelo's original design is by me. His main reference image is commissioned art by NanoColors. Current banner art is by Fresmein.
Last edited: Oct 6, 2019 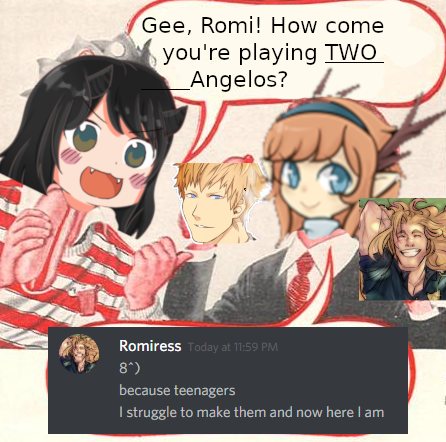 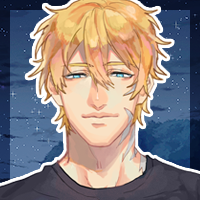 Notable Features: Jude's left arm is a robotic prosthetic. He has silvery patches that run across his left shoulder, extending down his side to his hip and up his neck onto his face and jaw.

Abilities Summary: Can create guns with magical ammo. Cannot get sick, does not require sleep, and does not become exhausted via normal exertion. Has excellent vision and a perfect memory. Extra durable left side where metal patches exist, and these portions are supernatural in nature. Robotic left arm. Can sense the names, species, powers, and weaknesses of anyone within 30 feet. Limited super speed for repeated actions and speed reading. Can modify memories. Immune to emotional auras. Can use dimensional storage. Can enchant items.

Reputation: From Halcyon City. Used to be a superhero. Former student council president. Used to live with Officer Genovese. Has a scary dad.

Misc Information: Scout training during the day. Fills in at La Bussola.

Art Credits: Angelo's original design is by me. His main reference image is commissioned art by NanoColors. Current banner art is by Fresmein.
Last edited: Sep 14, 2019

Jude bonds with his Regalia to get the college student's dream: peak health and not needing to sleep
Primary and Supporting Characters || Named NPCS

Jude simplifies his Omnilingualism, to the surprise of no one.
Primary and Supporting Characters || Named NPCS

Jude can summon guns. Pew pew.
You must log in or register to reply here.
Share:
Link