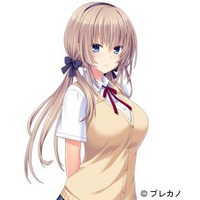 Appearance Description: Amalia is 5'11", and has blonde hair and blue eyes. Her hair rests in two pigtails on either side of her face, covering her ears, and are tied in small bows.

She has a thin body but has a larger than average bust and hips. On her left knee, a large scar can be seen, appearing as if she was cut by three long blades.

Personality Description:
Amalia is a kind person to everyone. She likes to make people feel welcome, even to the point of being a servant. When she meets someone new, she always tells them about her power, asking if they would like her to use it.

She doesn't show anger, despite what is said, instead, she just smiles, and gives them bunny ears. Amalia is fond of family bonds and would like to have many friends.

When around animals though, even shifters, Amalia becomes incredibly fearful and does everything she can to stay away from the creature.

Amalia also likes to use her power often, and can usually be seen with some sort of animal feature.

Ears: Hearing ability is increased.
Nose: Sense of smell is increased. Feels itchy all the time.
Tail: Just a tail.
Gills: For fish transformations, allows the person to breathe underwater
Wings: An additional set of wings is grown out of the person's shoulders. Ability to fly is weak, matching their running speed, Can't really go more than 6ft off the ground.

All transformations are only temporary unless agreed upon by both the target and Amalia. Temporary transformations last up to an hour, though Amalia can dispell them sooner.

Once she adds features, she can't add any other features of a different animal until the previous has been removed.

However, the Being was nothing more than an old greek lady named Circe, who wanted nothing more than to be lefted alone. Despite this, when she saw the child, crying, she decided it was her responsibility to look after this child, naming her Amalia.

Amalia grew quickly, and was more than interested in her mother's magic, being able to turn people into animals and back again. At her daughter's insisting, Circe began to teach her her ways, but after a few accidents involving an bear and at least one camel, Amalia began to have an incurable fear of all animals, regardless of their intelligence.

Circe, enjoying the lessons however, decided to shift things to something Amalia would like. Instead of turning people completely into animals, she now gave them animal features, whether it be paws, Ears, wings or tails.

Additional Information: Is there anything else to take note of?
Last edited: Oct 1, 2018
Dead <-> Alive​

Notable Features: Blonde. Always has some sort of animal attribute

Misc Information: Very Easily controlled. Will use her power whenever someone asks her to. Scared of animals.
Dead <-> Alive​

Amalia's app was editted within 24 hours to allow her to only put features from a single animal, rather than a single feature on a given person.