A Nice Swim to Calm My Nerves

Ain then circled around the highschooler out of the range of the aura, and arrived at his towel and began drying himself off - the whole time he never looked away from him. He pointed at his mouth and shook his head, to at least make clear he couldn't speak to him, but Ain didn't know if that is what came across. 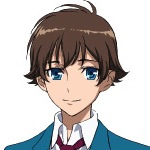 Eli Pelham
For some reason, the man out in the water didn't seem to want to move closer. He didn't lose eye contact though. The movement were a bit strange, pointing at himself and shaking his head. Going over a few possible meanings, Eli came to two possible conclusions: He didn't want to talk. or he couldn't talk.

The second set of movements were a lot clearer, however. He was okay, or at least mostly alright. Eli nodded himself, acknowledging the response.

With the distance being almost constant, Eli realised he had a problem with being close to others. Must be an Aura, He thought. Taking half a dozen steps away from the sea, and in the direction away from the party. He could be able to come ashore now.
Dead <-> Alive​