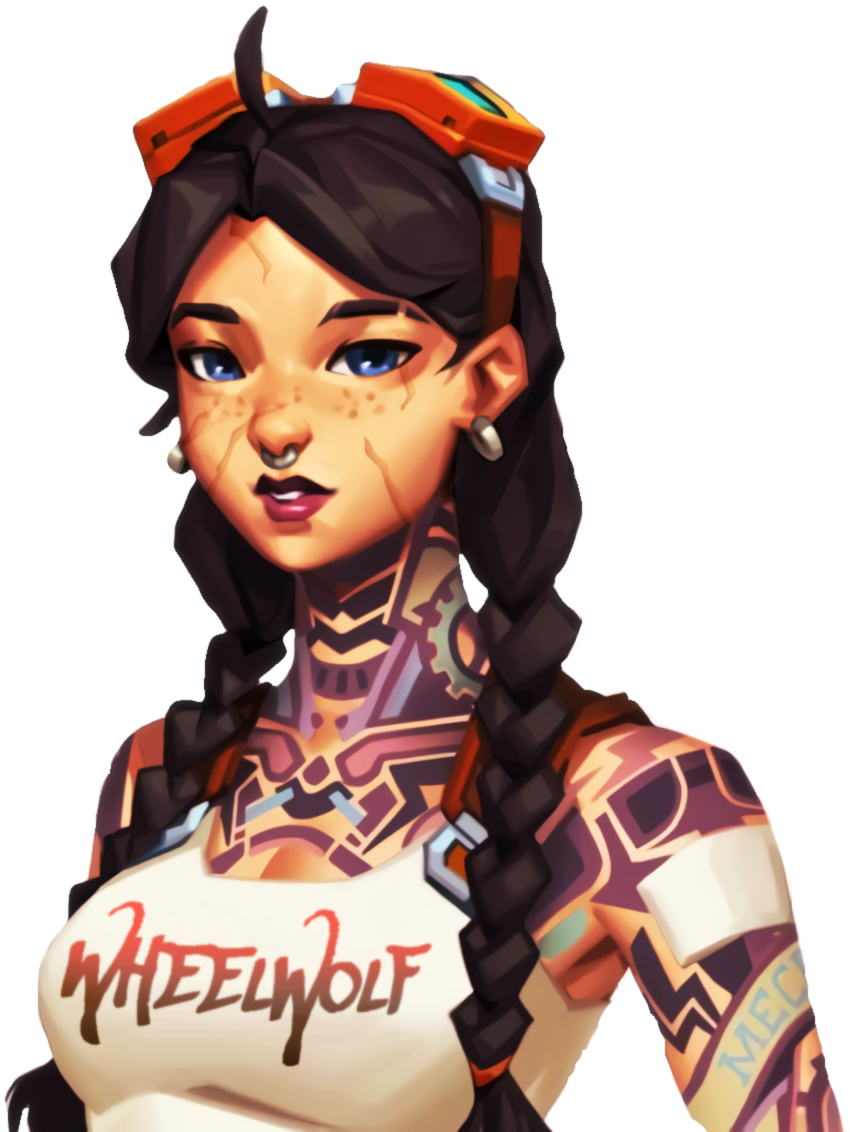 Zoe is in many ways the prototypical all-American girl: tall and curvy with muscular arms that almost don't seem to belong next to her round, heart-shaped face. Black hair frames said face and her big blue eyes, braided carefully into twin pigtails and held back out of her eyes using a pair of welding goggles like a hairband. She dresses in clothes that would put her most at home in a body shop repairing cars, with durable pants and tank top shirts being her go to. She is also almost never seen without a thick pair of heavy gloves for grabbing onto hot or sharp surfaces.

Two of Zoe's most prominent features are her scars and her tattoos, the latter of which she opted to get to cover the former. She is a veritable canvas from the neck down, with significantly more skin inked over with a combination of machinist themes, some callbacks to her home in Louisiana, her Rougarou heritage, and outer space. She also claims to have a leopard print dragon tattooed somewhere on her, but won't show or tell where. All of her jewelry, including the nose ring she wears, are made out of military grade tungsten. She does not wear any of her jewelry while she works.

Zoe's actual most prominent feature however is her wheelchair. State of the art and custom built, her chair is the only way she has to reliably get around and has been modified - largely by Zoe herself - to facilitate this.
Her Rougarou form is a massive creature, over six feet at the shoulder, that looks like a strange cross between a wolf and a gorilla. She has long muscular forelimbs with almost hand-like paws, a large head with terrifying fangs, and thick red-brown fur. Usually in this form, she is strapped to a set of all terrain wheels that allow her to run despite not being able to use her hind legs.
personality
Zoe, like many of the Strega clan, is a fighter. Aggressive to a fault when she feels backed into a corner, being a late bloomer into her werewolf heritage means that she hasn't had nearly as long to curb her more lupine tendencies. She is quick to threaten someone with whatever tool she happens to have closest at hand, though she rarely actually means it.

She's a huge geek and savant when it comes to mechanics, often losing herself in the interesting things that she sees around her and having a habit of taking things apart to see how they work. Luckily she can usually put them back together.

Zoe, despite her outward bubbly and energetic personality, is still scarred mentally by the attack that left her crippled as much as she is scarred physically. She is terrified of Wendigo and similar creatures and will avoid them at all cost. And though she makes jokes about it often, others making light of her inability to walk hurts her quite a bit. She is dogged in her pursuit of a way to walk again, and no she will not stop making that pun.
abilities
Active
Shifting
Zoe can shift between her Rougarou form and her human form at will. She has control over herself and can speak during these times. During the full moon however, she is forced to shift and becomes mostly feral and wild until she changes back at sunrise.

Passive
Rougarou Senses.
Zoe's senses are about as good as a wolf's, even in her human form. Her hearing is not as developed as her brother's, but her sense of smell is incredibly good at picking out individual smells among many. She can see in the dark and pick up individual scents among many in an area.

Rougarou Physique.
In her human form, Zoe can push roughly 700 pounds, though she cannot lift nearly as much without the use of her legs. In her Rougarou form, her strength effectively triples. In this form she also sports fangs and claws that can tear a car door off rather easily.

Rougarou Healing.
Zoe possesses a low level of accelerated healing, allowing her to heal from minor injuries within a few minutes and recover from more severe injuries over the course of a few days. She is unable to regenerate a severed limb, however if the limb is still in tact it can be reattached and full functionality can be regained over a couple weeks.

Weakness
Silver Anathema.
Much like other werewolves, Zoe can be burned by silver. Wolfsbane administered to her skin or ingested will weaken and sicken her, and wolfsbane introduced into her bloodstream will kill her. Removing her head or destroying her heart or brain are also effective. She is also more flammable than normal, and has a natural aversion to fire.

Wendigo Scarred.
Zoe was attacked by a Wendigo. This left her without the use of her legs, and a residual curse from the wound has kept any manner of healing, magical or otherwise, from returning them to normal.
biography
Zoe grew up in the bayou of Louisiana, helping her family in their business of selling human meat to flesh eaters in the United States. Everything was fine until she was around ten and got attacked by a Wendigo one Winter.

Zoe fell into a depression for a long time after that, until she first started shifting. Realizing that she still couldn't use her legs in her Rougarou form, she found new purpose in making herself mobile. At the same time, her family knew they couldn't let a werewolf on wheels running around the bayou. So she was sent to live with her brother, Alain, on Manta Carlos.

She's made friends since then and helped save some poor girl from her abusive boyfriend. But she's also grown increasingly frustrated, on an island full of magic, still no one can fix her legs. She's dating a dragon named Vega Gendrake, who keeps her in line by generally being a snarky asshole.

Leaving college a year in due to boredom, Zoe got a job on the space station in a body shop. She has been learning how to put together and maintain alien technology, including spaceships, and has set her eyes on a new profession that she thinks will be exactly what she wants: ASTRAL Racing.
Resources
Zoe has her salary, tools, and access to the workshop where she works. She also has an apartment on the space station that she lives in and, unknown to most everyone she knows, a spaceship she has been building on for months.
additional info
Of note, Zoe can move her legs to a degree, they just lack the muscle and connective tissue to hold her weight. She does regular physical therapy to maintain what muscle she still has.

Image Credits
Official Art of Jules from Fortnite. Edits made by me.