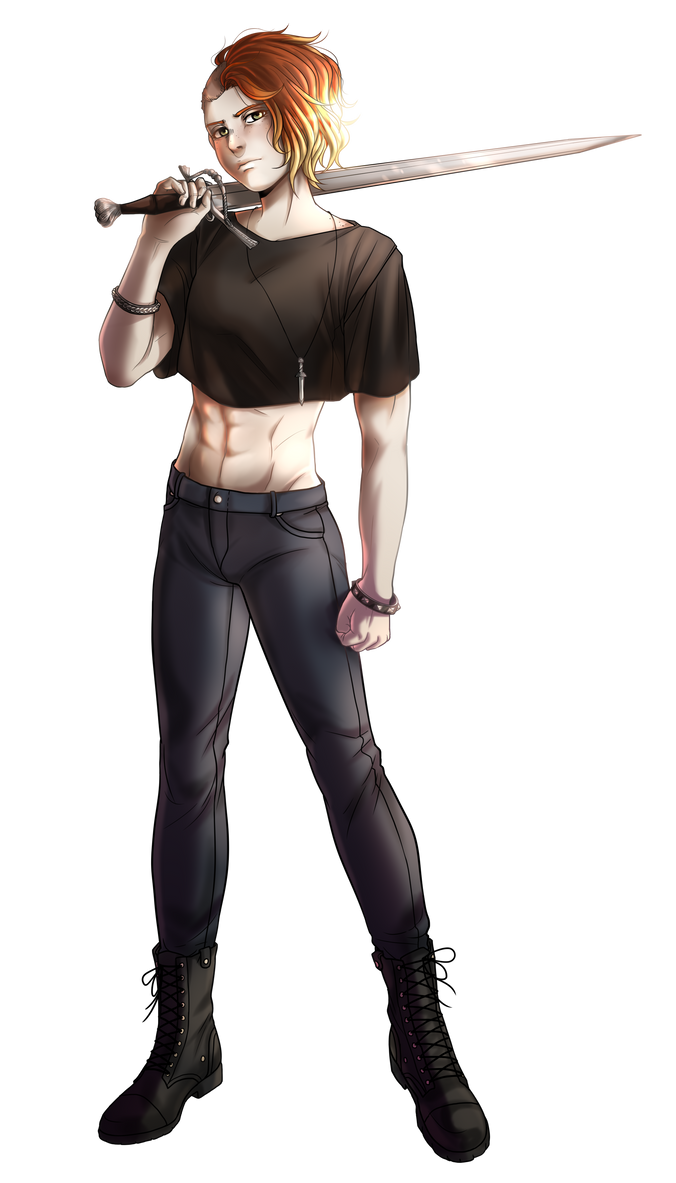 •She stands at 5'10, with slim but athletic and toned build, with a slightly androgynous face. Her hair is a bit wild, with different shades of orange and red giving it a fire like look. Her clothes from simple skirts and t-shirts to athletic clothing.
•Xera on the surface has a good amount of confidence, and is generally decently friendly and playful, with some snark mixed in and slips out occasionally. She's has deep dedication to her studies in weapon conjuring and is quite talented at it, also making sure to study how to properly use the weapons. Overall she's a bit bitter and lonely, having struggled to make friends out of fear of what happened with her family happening with them.
Active
•Weapon Conjuring:
-Melee: She's able to summon any melee weapon she can imagine. These weapons are as strong as the finest steel but shatter upon being dropped. The weapons feel near weightlessness to her and cannot harm her. She can only summon and wield one at a time unless the weapons are specific designed to he wielded in pairs, and summon them in quick successful.
-Projectile: She can summon projectiles weapons. This allows her summon any bow she can imagine with a single quiver of arrows, and summon any fire arm with it being fully loaded. The bows and guns are again as strong as steel, near weightless but shattering upon dropped. She can also refill her ammo via the same conjuring ability.


Passive
•Physical Enhancements: Her strength, agility and speed are all at peak human levels.
•The Alathemias are a family of mages, ones that specialize in combative magics. They were especially skilled in the magically creating weapons off all sorts.
•The current head of the family and his wife had a child, one that they named Xavier. The child was raised as a potential heir to take over the family, though other sibling would follow.
•Shortly after her fourteenth birthday she told her parents about her gender identity and asked to be called Xera. They did not react the best, her father especially wasn't very accepting.
•Shortly after, Xera was sent to Manta Carlos. While the official reason was because her father wanted her to see more of the magical world, but in truth it was because he wanted her out of the way so he could choose a new heir. So while not officially disowned, or cut off from the family it's been made clear her father will choose another heir if he can.
•Xera has lived on the island ever since, only occasionally talking to her family, and never with her father.
•She lives in the dorms and is supported by a school scholarship. She receives money from part time job as a cashier at a magic shop.
•She is pre-op transgender.
•The Alathemia family mostly live in a large castle located in a pocket dimension.
•All art are commissions by Sayutb.

Image Credits
•All art are commissions by Sayutb.