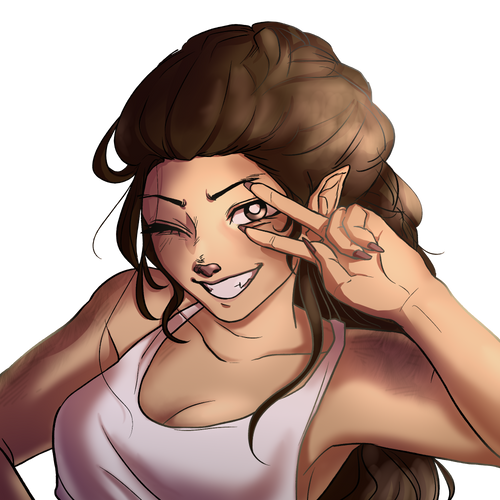 TASHA | 2,000+(ACTUAL) 26 (APPARENT) | NOV 15th | FEMALE | WEREWOLF
CITIZEN | OWNER OF WOLF'S DEN GYM
appearance
Human Form: Tasha is what most imagine when they hear of a personal trainer and powerlifter. Her body is toned to near perfection, while maintaining her softer facial features. Fangs stick out from the smile she loves to keep on. Her Brown hair is kept back in a large fluffy braid that is reminiscent of a viking styling. Rich brown hued eyes almost seem to sparkle with everything she does. The tip of her nose is colored brown, the color of her skin in her were form. Her height at only 5'7", while not intimidating to most, seems much taller because of how she holds herself. Her usual attire tends to be anything that lets her move and be active. Workout tights or sweatpants and tank tops are most common. 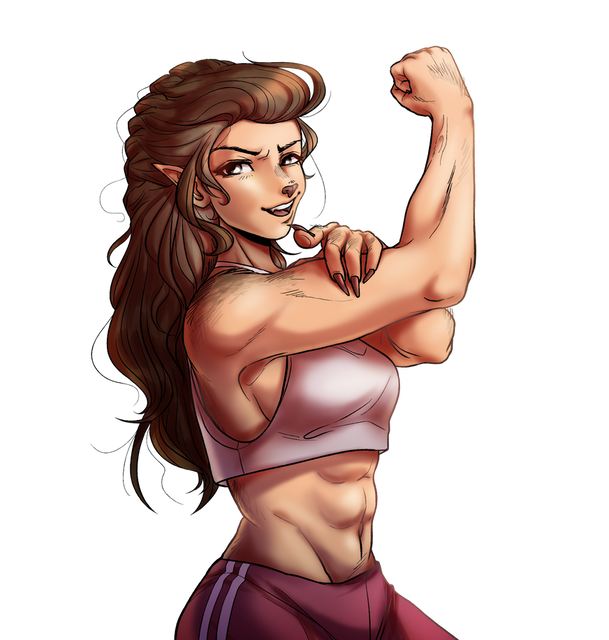 Werewolf form: Tasha in her wolf form gains significant height, growing to about 9 feet tall as the rest of her body grows proportionally as well. Her brown fur fills out and covers the rest of her body, as her claws and fangs lengthen and sharpen. The signature long braid of her hair remains and sets her apart from most other wolves.
personality
Tasha is extremely motivated and playful. Where she really shines is in competition. Always pushing people to achieve things and beyond what they thought their limits were. Very confident in herself without being arrogant, until she is challenged. Then she doesn't hold back on shutting someone down. However, once that is done she'll congratulate her opponent, and even give them pointers to improve.
active abilities
Anything you can do: Tasha's competitive nature allows her to increase her already impressive strength to at least match her opponent or challenge. She has to see the display of strength to be able to match it, and the extra strength ends when she no longer feels she needs to prove herself.

passive abilities
Werewolves of London: Tasha is a werewolf. Being so, she has most of the associated traits of a werewolf. Increased strength and speed being able to deadlift and rep several thousand pounds as well as run up to a sustained 45 mph. Heightened sense of smell and hearing. And substantial stamina and durability. These increase two fold when she transforms into her actual werewolf form.

Alpha Dog: Being the banished true alpha of her pack, Tasha is able to turn people into a werewolf from a bite on the full moon. She also gives off a scent to other canine of being a pack alpha.

Immortals: Tasha doesn't age anymore. She can also not be killed through typical means. Limbs will regrow in days and body will regrow in weeks if not reintroduced to the head. Limbs and head can be reattached and healed within hours but she can't control them until it is healed. Only with pure silver are they permanently removed.
weaknesses
Take me out: If Tasha comes in contact with pure silver it will burn her flesh. Destruction of her heart, decapitation, or destruction of her brain through use of silver is the only way to truly kill her.
biography
Tasha was born around the time of the Germanic tribes feud with Julius Cesar and the Roman Empire. Being a of pack pure blood werewolves, they did what the could to avoid conflict, but never backed down from a fight. She was raised to be strong and never give up in a fight.

After every battle her pack faced, more and more of her brothers and sisters were slain as the humans figured out their weakness. Eventually they were forced to flee and into hiding. Centuries passed and Tasha grew tired of running the day her mother was slain. She knew only males had ever been the true alpha, but she had to do something.

Challenging her father for his title of pack Alpha, she beat him fairly, even though she had been worked over herself. Stepping to address what she thought was now her pack, she was met with insults and cries of dishonor. "We will never survive with a woman." "A female isn't fit to lead. You dishonor our tradition by even challenging your father."

Tasha was banished from the pack, even though she was the true alpha. She spent many more centuries in isolation, learning human ways and staying hidden until she could control her transformation. Eventually she worked herself into society, moving from town to town as time passed.

Moving to modern day, Tasha earned degrees in physical therapy and physical fitness. Becoming a fitness trainer she eventually opened her own gym to much success.

Years of ignoring her transformation caught up to her as the physical features of her human form were permanently changed. This is when the scouts reached out and she moved to Manta Carlos. Using the wealth she had acquired and continued to gain, she began construction on a gym for magical creatures, "Wolf's Den Gym" where she holds classes as well as being the operation manager and owner.
resources
Tasha owns "Wolf's Den Gym." She lives in a comfortable house close to the woods allowing her to run and hunt during full moons.

additional info
Olcan Pack updates: A new alpha took over not long after Tasha's banishment. He was extremely violent and extremist. Several members wished they'd stuck with Tasha; anyone caught expressing these sorts of opinions within the next few decades was brutally punished.

The expansion of human settlement/development of land and awareness of what's going on around them has put pressure on the werewolves' way of life. This, mixed with the extremist Alpha, has resulted in a number of schisms, sometimes involving a chunk of Tasha's original pack joining up with a rival pack. Different groups have tried to integrate with human society to varying degrees. (Credit to Kait for the ideas!)