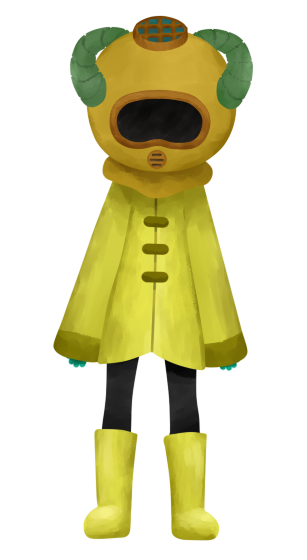 When most people see Sushi, it's hard to tell much aside from the fact that they are just above four feet tall and frail. He's usually wearing a special scuba helmet which covers his whole head. Even the glass in front is tinted, making it hard to see his face unless someone were to press theirs right against it. His clothing is almost always waterproof, typically including an over sized yellow raincoat and rubber boots.

Underneath the layers, some may be surprised to find a teal coloured fish boy. Atop his head is a bush of darker teal coloured hair, with a lure similar to that of an anglerfish's poking out. Though his esca (glowy thing at the end of the lure) is usually not glowing. His eyes are fairly oversized, neon blue in colour and actually glowing when he gets excited. His ears are very similar in appearance to fins and near the top of his neck are a set of gills. His hands and feet are also webbed, and his skin is more on the scaly end of the spectrum. 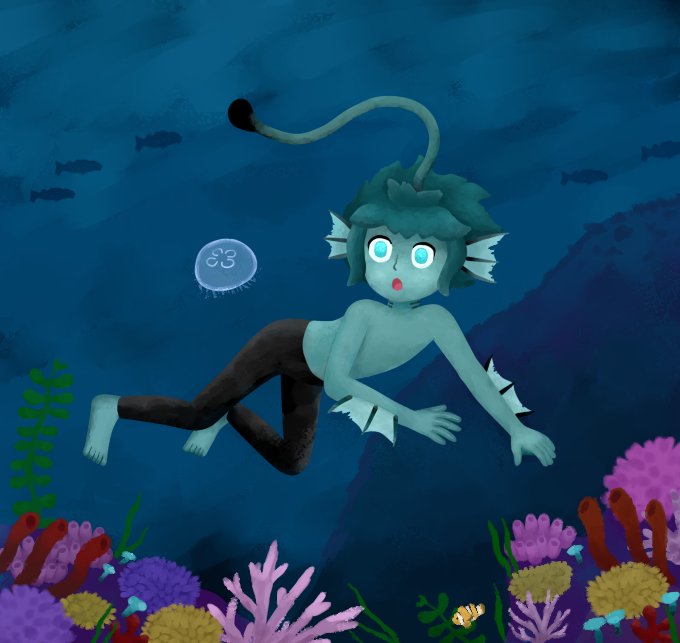 It's not always easy to tell what Sushi is thinking. The fish boy has developed a much better understanding of speech than he had when he arrived on the island, but communication still proves to be a weak point for him. That combined with his face usually being hidden are often a recipe for miscommunication. Big words and sayings for example will usually fail to land. Despite his limited vocabulary, the fish boy is very outgoing. He seems to naturally approve of everyone he meets, and likes to be around company, often regardless of how they treat him.

He's a curious lad. Often trying to learn new things about the strange land above the water, and putting effort into becoming better versed with how life works on Manta Carlos. However, he's a naive and gullible young guy. He'll believe just about anything he's told, and has very little reason to go against what people say. His docile nature certainly doesn't help with that either.

Despite his inability to catch lies and his lack of common sense, he is still quite clever. He's good at problem solving and has a knack for puzzles. He's certainly far more analytical than he lets on, which lends itself to his empathetic tendencies.

For as far back as Sushi can remember, he was always just alone in the ocean. He was just another fish, relying on instincts to stay alive year after year. Luckily, he had the ability to go invisible, one that he became reliant on for catching prey and avoiding predators. If it wasn't for that ability, he probably wouldn't have survived as long as he did.

After twelve years of the ocean life, he was discovered by a scientist who was testing out an invention in the water. They took immediate interest in the fish child and ended up catching him and bringing him home.

Originally, the scientist figured they'd discovered a crazy new species and planned to share their discovery with the world. However, that took a turn when she discovered his ability to turn invisible. She then came the realization that the boy was intelligent, further pushing her away from her original plans. She instead chose to hold on to him.

She kept him in a large basin of water in her basement, and worked on teaching the boy to communicate for the following weeks. During this time, she also worked on creating a helmet to allow the boy to get around on land. The lady started calling him Sushi, mostly as a joke, but it stuck and essentially became his name.

Unfortunately, her heart wasn't exactly in the right place with everything she did to help him out. When she finally got him to a point where they could somewhat communicate and the helmet was successfully allowing him to travel on land, she revealed her true motive. She started using him to commit robberies. She needed money to fund her projects and Sushi couldn’t even tell this was wrong.

She actually succeeded a couple times, with Sushi mindlessly following her simple orders to make them invisible or not. But on the fifth job, they got busted by scouts. The scientist was thrown in jail, but Sushi was separated and transported to MCI.

They took several days to try and get him prepped before letting him loose. They improved his vocabulary with a few important words and phrases. They also set up a dorm room for him with a huge fish tank inside to take up about half of the space.

The school takes care of him for the time being.

The art included in the character app is by me.

Image Credits
All artwork in this app is by me