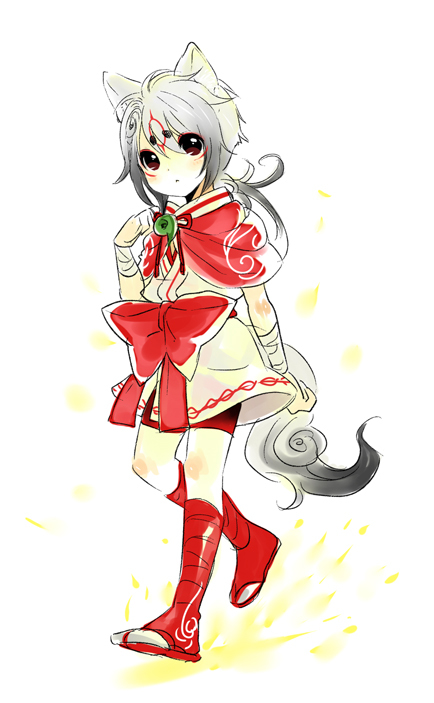 Art by ホリー (Kaze-Hime)​
Personality Description:
An avid artist at heart, Sumi absolutely loves drawing, painting, writing, scribbling, whatever he needs to do to distract himself, except singing or playing an instrument due to his lack of confidence and him being a bit off tone. Despite his childish look, he is smarter than what one may expect of his apparent age and actual age, possessing knowledge of things like anatomy to a surprising detail, as well as being a bit of a critic to fellow artists but focusing on constructive criticism.

Easy ways to earn his trust are to offer meat or sweets, but the former is guaranteed to please him while the later just gets him buzzed for most of the time, but keep anything heavy on salt or citric acid away from him, he simply can't stand very salty or citric flavor. Among things he can't stand are anime cliches (such as the main hero always getting an ultimate power), people who can't recognize the value of art, and absolutely cries like a baby when he reads or watches a sad history (not that he doesn't like it, to be honest).

Always trying to be of help, Sumi uses his abilities in secret to guide others towards what they want, need, or forgot, however people misunderstanding what he hinted them frustrates him a little. Be careful, he is a clingy kid.

Biography:
Resources:
Aside from all the resources that the school provides (Including housing), he possesses a black randoseru backpack that he treasures as the first gift he received.

Retrieving What is Lost....

In that story is revealed that he was once the child of a Thunder Oni and a Human during the Muromachi Period (1333 to 1568), had physical features that were different like short spiky black hair and yellow eyes, and his black kimono with clouds and lightning in yellow, with an embroidery of a mitsudomoe on the back as an emblem of the oni clan his mother belonged to. Norai, as he was known, lived outside the town, deep in the forest, with his mother Shirogane (the Thunder Oni who has fallen from the village in the clouds and was never allowed to return to, as her leading Raijin forbid her) and his father Yoma (a genius of the mystical arts of the time, who so happened to create the ink from which Sumi was "born")

Norai explained how his mother got hurt trying to protect him from a bakeneko after he ran away from overhearing his mother wanting to return to the clouds, how that was the day he saw her anger surface, and how since he had believed in the oni being angry at him. That was soon disproven by Sumi, as he pointed out how the drums were being played with a mother's passion for life.

However they both knew that the regained harmony and peace to Norai's heart wasn't going to last forever: Yoma will die alone, Shirogane leaves without giving reasons nor destination, and Norai himself is fatally wounded at the age of 31 while trying to protect the village, holding only the memories of his childhood in mind, therefore all else is hazy.

Gender
Technically none, identifies as a boy