Appearance Description: Sazz is 5’8” in his human form. People tend to ask him how he managed his distinguishing features. His answer is simply “Yes”. Sazz is a humanoid feline feline, with primarily black and white fur. He also sports a fluffy orange and black tail. His personal sense of style hasn't changes. If nothing else he has managed to retain his smugness. 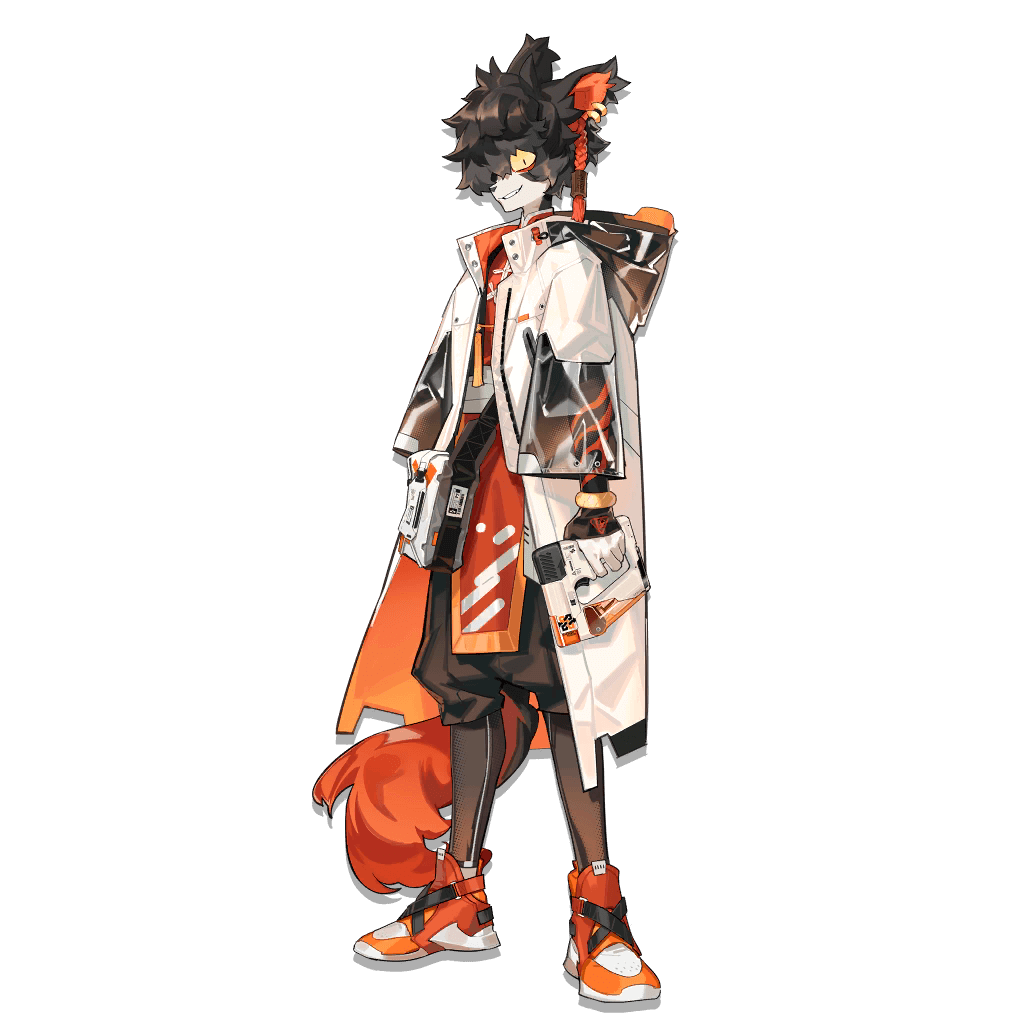 Personality Description: The best way to describe Sazz is playful, like a cat. His friendlier traits are a thinly veiled cover of how truly dangerous he can be. He is a demon after all. He likes to have fun, but his ideas of fun may not always line up with what others might consider fun. That said, he does enjoy the company of others. He tends to be the teasing sort.
Underneath all of this however, is a cold calculating person. Cross him, and make no mistake he’s definitely plotting revenge in some form or another.

Since losing the demonic portion of his being, Sazz has become a bit more reserved, and quiet.

Active Abilities:
I Think, Therefore I Am: By chanting empowering phrases, Sazz can effectively cast a wide variety of magical buffs on himself. He can only keep one buff active at a time. The buffs work on a time limit as well. Should he chant go uninterrupted for five minutes, the buff will remain for ten. When chanting, he must choose his words carefully. Saying "my skin is steel" will turn his skin into steel rendering him unable to move for the duration of the spell. If Sazz chants "My skin is as hard as steel" however, he will gain skin with the specified hardness for the duration of the spell. Sazz must have something specific, and physical in mind in order for the Mantra to work. He cannot chant to have an advantage over a situation such as winning a fight, or passing a test he didn't study for.

I Think, Therefore You Are: By making physical contact with another person and having them chant with him, Sazz can also have his chants effect others in the same way they effect him. Again, the same rules apply as I Think, Therefore I Am.

Typhon's Bestiary: Aside from shifting into his true demonic form, Sazz can take on the forms of various creatures thanks to a particular magic tome. He can take the various forms within this tome. Some creatures are more whimsical in nature while others are more ferocious. When Sazz takes on his larger forms he is capable of running at speeds up to 60mph, and lifting roughly two tons. He also sports a tougher hides, and claws capable of rending steel. The forms with wings are capable of flight. Smaller forms tend to be nimble and quick. Overall his other abilities don’t change with these transformations.

Rabbit 2’5”
Imp 3'
Cheshire 3'6"
Fat Boi 5’8”
Hellhound 6'5"
Feral Beast 10’
Dragon 15’
Rat Mode! Sazz can temporarily change people into rats via eye lasers. The beams themselves have a range of six feet and the effects last roughly five minutes and targets still retain their intellect, and ability to speak, but nothing else. This ability only effect up to two targets at a time.

Animate: Sazz can temporarily animate inanimate objects, bringing them to life to do his bidding by casting a lightning bolt from his finger. Said objects gain features such as faces, and will move as if they are living creatures for the time that they are animated while still being made of the same materials. While they have trace aspects of his personality, they are non-sapient. If damaged severely enough the objects will revert back to their original states regardless of how much damage was inflicted. A table that is snapped in two will still revert to being an ordinary undamaged table.
The effects only last for five minutes unless said object is destroyed. Sazz cannot animate complicated machinery such as cars. He cannot animate anything larger than a dining room table. Objects that have deanimated cannot be reanimated for ten minutes. Should an object be forcefully destroyed it will cause him a sharp painful psychic backlash. Sazz also cannot affect holy objects with this ability. Currently Sazz can control five objects in this manner.

Telekinesis: Sazz can move up to half a ton within a thirty foot radius with his mind.

Gremmy: Playing with his animation abilities, and a few magic rituals, Sazz has turned his phone into a familiar. Gremmy has all the capabilities of the most up to date smart phone model. Thanks to the established link, Sazz has with them, he always knows where Gremmy is within 100 miles. Gremmy sports retractable limbs, is more durable than the average phone, and is also capable of flight up to 15 mph. and at a maximum altitude of 20 feet. Should he be damaged Sazz must gather proper materials and perform a ritual to restore him.

Healing: Sazz is capable of healing from injuries much faster than the average human. Small wounds can take seconds or minutes to heal. For more severe injuries they can take several days to a week to fully heal. Sazz can also regenerate lost body parts with the exception of his brain over the course of a week, assuming he has proper medical support through the process.

The Great Will: Sazz is immune to mental abilities, and powers that affect his perception of things such as mind control, various auras, and illusions. He is however fully aware of them when they are in play.

One of Great Potential: Sazz projects a particular air about him that identifies him simply as someone holding great power. This does nothing more than that.

Immortality: Should Sazz be killed, he will respawn in two days time.


Biography: A certain ruler of hell found himself with one more child than he had intended for. After naming the child he used them to grant the wish of a woman who wanted a child of her own. And that was how Sazz came about. His mother conceived, and gave birth to a seemingly ordinary child. That is until he was in kindergarten and turned a classmate into a rat because he was mad with them.

It practically goes without saying what happens next...

The incident prompted a fairly fast response from scouts and the Veil, performing cleanup with witnesses. Then moving Sazz, as he was calling himself now to the island. He was monitored closely, and his true nature as a demon was discovered. He has since been living on the island.

Resources: Lives off campus with his mother, works part time at a movie theater

Images used for alternate forms are official art of Black Rabbit, Black Creature, Hellhound, and Ifrit from Granblue Fantasy. And Official art of Kindling Imp and Zordiark from Dragalia Lost